Beaver populations have been relatively high for many decades due to lack of extensive trapping and abundant beaver food habitat like aspen. Beaver can cause considerable problems for county road commissions, other government road maintenance personnel, private land owners trying to maintain an access road across a stream crossing, and waterfront land owners with beaver preferred trees in their yards. Beaver create problems by tree cutting, building dams and flooding stream crossing areas, and blocking culverts.
Beaver are especially aggressive in the late summer and fall. As a Michigan Department of Natural Resources fisheries biologist, I dealt with beaver issues for several decades related to excessive beaver damming having such a detrimental affect on trout stream habitat. There is one overwhelming fact of dealing with beaver problems – in the short run you have to remove the beaver to solve the problem.
For many years I have watched road maintenance personnel, railroad maintenance, Department of Natural Resources and Forest Service personnel and private land owners attempt to control beaver flooding, plugged culverts, threatened road grades, and cutting of desirable trees. Any attempt to control these beaver related problems without removing the beaver is futile. Sometimes in the spring or summer a beaver flooding may stay down for a little while but the beaver always rebuilds it and you are back to the problem you started with. In the late summer and fall work crews can unplug a culvert and draw the water down with the beaver still in place, typically the dam will be rebuilt, culvert plugged and the water flooding the next day. In some cases, culvert clearing became a daily chore for road maintenance personnel due to the likelihood that the road could wash out.
We found from years of experience that the best control measure on beaver is to obtain the services of a skilled damage control beaver trapper. Ideally if the beaver problem is not bad yet, you could arrange an experienced trapper to remove all the beaver in that area during the regular trapping season. Unfortunately, beaver problems often crop up well before the late fall trapping season. If the problem is pressing, a free Beaver Damage Control Permit can be obtained from the DNR – Wildlife or Conservation Officer. This allows the land owner or road crew to remove the beaver outside of trapping season if there is proven damage or likely damage (road washout etc.). 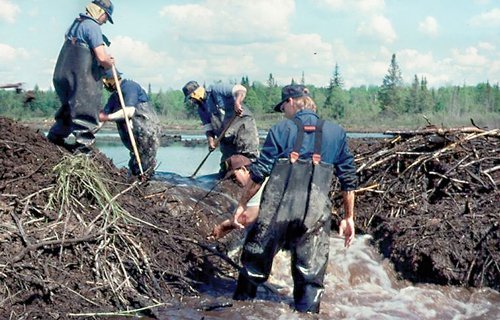 A minimum security prison crew removing an old beaver dam on upper Cooks Run – Iron County. This crew removed over 100 beaver dams in Cooks Run after the beaver were removed by trappers. The dams were gradually drawn down with hand tools and potato forks to avoid downstream damage from flooding water that was released.