Both my son Greg and I are inventors, over the years we had developed many new hunting tactics along with new patented hunting products that had sustained our A-Way Hunting Products business for many years. Lately though we had become so busy with our new “A-Way Outdoors Invention Consulting and Submission” business that we actually found it much more financially rewarding to sell most of our patents and those of our inventors.
After 28 years being in the sporting/hunting industry we acquired the all-important contacts and now have the ability to open doors that could rarely, if ever, be opened by inventors on their own. This allowed us to eliminate the many hunting shows that we have done in the past, along with all that time consuming travel. Now with this new leisure time we have more time to enjoy doing seminars for church groups, sports clubs, etc. We have shared many of these hunting tactics on national television, and with the attendees at our countless seminars from around the country.
But, I must admit we held back some of our most productive tactics, with many still top secret with the exception of family members. Only one of my grandkids, Alyssa (Greg’s daughter), has shown a strong interest in hunting ever since she was a little girl. So of course she was the recipient of our best tactics simply because of her continued interest and her time off of school being extremely limited, and especially since she was always involved in sports and horseback riding competitions throughout Michigan and some of the surrounding states. Yet, like her dad and I, she is willing to be highly selective when it comes to the caliber of bucks she shoots, often going home empty handed.
Now that Alyssa is going Michigan Tech University in the Upper Peninsula, a beautiful campus with friendly, knowledgeable staff, she will have even less time to share a hunt with us. That means we had work to do to tip the scales in her favor. Lately though her blind location wasn’t as productive as it once was. For whatever reason the deer switched their travel pattern to an area about 150 yards away from her blind and since she only hunts with a crossbow in a Shadow Hunter blind we had to find a way to reverse that pattern.
Alyssa’s blind is located near a river that flows through this farm, surrounded by heavy cover that gave the deer the assurance of security that they require to maintain a natural travel pattern. Sure, we could have moved her blind into a more favorable position, but past experience has taught us that this would have been a temporary fix. The solution, create a natural looking funnel to basically force funnel the deer into returning to the status quo. In the past we had made small funnels, you know, the usual stuff like lowering or raising a fence, or piling branches on a run to divert the deer to another run, we even mowed trails for the deer to follow, which we still do.
The realization of the enormity of what we were about to get into really put our inventive minds to the ultimate test. We were well aware that you just can’t throw up a foreign object like an eight-foot fence without alarming the local deer herd. We needed to blend in. As Greg and I walked the farm pondering the problem we happened to stop under the shade of a massive black walnut tree. In the past we had talked about logging off about 25 of these huge trees, with most being in Alyssa’s hunting area. But each time the subject came up a flashback memory came back to me where deer hunting on one of our favorite old leases was literally destroyed, wiping out generations of deer travel patterns, when the owner had the farm logged off. Treetops were left haphazardly everywhere. 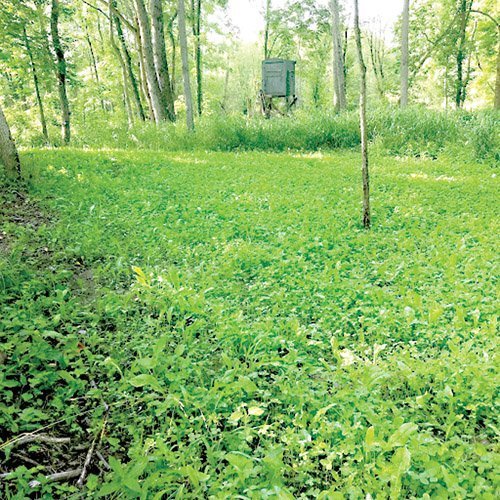 The author, Fred Abbas, and his son Greg came up with an idea of creating their own deer funnel with an added food plot.

As we sat there talking and marveling at the size of the tree, Greg, out of the blue, said that Dave now works for Post Hardwoods. Greg was referring to David Balowski. Dave and his wife Tracy were part of our pro staff when we were A-Way Outdoors on the Outdoor Channel. Then like a bolt of lightning, it hit me, I instantly realized we may have just found a solution to our problem. I mentioned the idea to Greg, “What if we have these walnut trees logged off, do you think Dave would be willing to align the treetops into a natural funnel? It’ll probably take a tremendous amount of extra work with heavy equipment.”
Greg agreed and we drew up the plans. Greg ran them by Dave. The possibility excited me. After all, what’s more natural than a man-made funnel blended in with trees that the deer were familiar with?
Dave, having vast experience with the way of deer, easily understood our project and readily agreed to work with our plan. That got the ball rolling. I then contacted Steve Scott of the Whitetail Institute for his expertise on which food plot planting we would need to best bribe the deer into following the funnel into our ‘trap.’
Deer never travel aimlessly, they always have a purpose in mind that leads them here or there. We gave them that purpose by planting “Fusion,” a delectable blend of chicory and Whitetail clover. We set out six cameras to monitor different parts of both sides of the funnel to gauge the deer’s reaction, and two more cameras over the food plot.
It didn’t take very long for our cameras to capture just how amazingly successful our plan was working, which was much beyond our expectations. Initially most deer were drawn to follow the funnel through sheer curiosity, but once they discovered the food plot it became an almost daily habit that culminated into hundreds of pictures, with many being of bucks. Now it is just a matter of time before the right buck or bucks present themselves, and hopefully it happens when Alyssa is in her blind.
For more information; A-Way Outdoors Invention Consulting and Submission, www.awayhunting.com or 989-435-3879. Post Hardwoods Inc., www.posthardwoods.com or 517-317-4101. Whitetail Institute, www.infowhitetailinstitute.com or 800-688-3030.