The woods are quiet and still. It is 0-dark thirty and I walk a familiar path to my chosen ambush site, trying to get there before the birds awaken from their roosted slumber. When I reach my destination, I take a seat and relax… yes relax. The world makes for a busy lifestyle, but right now I am in my element and I simply relax.
As light overcomes the darkness, the woods remains quiet with two exceptions. One is the noise of acorns falling through the leaves and bouncing off the earth; I chose this spot because I had seen many turkeys eating these acorns in the past. The second sound that I hear is what sounds like two raccoons sparring in a nearby swamp. I like this sound, it tells me that the wild still exists and that I am a part of it.
Twenty minutes after legal shooting light, I hear my first gobble. It is soon followed by another and another. In my opinion, this is one of the sweetest sounds in Michigan. It ranks right up there with waves from the Great Lakes washing ashore and the wonderful times when I hear my family and friends laugh.
When the bird gobbles again, I answer with my own call utilizing a tube gobbler call. I do this because during previous fall encounters, I’ve watched male turkeys abruptly turn around and go towards the sound of gobbling. Autumn birds tend to flock together with their own gender.
About ten minutes later and I see movement in the underbrush. Turkeys? Of course not, I tell myself; it’s deer. When you deer hunt you see turkeys and when you turkey hunt you see deer. Cynical, I know, but that is what goes through my mind.
The deer eventually do what deer do and wonder off browsing as they go. I once again relax and listen to the sounds of the woods. 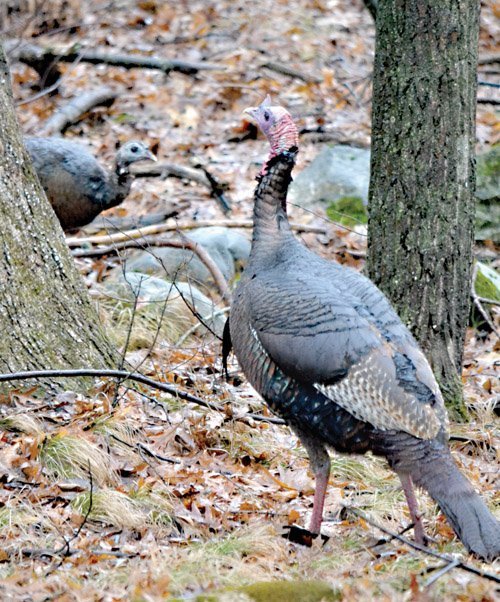 A few minutes later my senses alert me that something is nearby. I scan the green floor of the forest and I see movement out of my peripheral vision. There are four redheaded turkeys fifteen yards from where I am seated and they are mostly hidden in the thick undergrowth. They have their necks stretched high and their heads rotate searching for what I believe to be me, because of the gobbles that I made an hour ago.
I size up the four birds and they all appear to be jakes by the size of their rather short beards but one has a much larger beard and I am not sure if he is a jake or tom but I have selected him as the one that I want to shoot. They are now in my shooting lane and I place the bead of my 12-gauge shotgun on the base of his neck; as I am about to pull the trigger I see movement from the right. It is a good looking 8-point buck which turns all the turkey heads directly away from where I sit. How cool is that?
The buck is walking at a good clip and the turkeys are not moving so I decide to wait until he gets well out of sight before I disturb the woods with the sound of thunder.
The buck disappears. I once again take aim at what I think is the biggest redhead and let the three inch, number five-shot do its work. The bird instantly disappears on the forest floor and I have successfully killed a Michigan turkey during the often ignored fall season.
Michigan’s fall turkey season runs from September 15 until November 14. The bird shot in the story from above was shot on September 16. You are allowed one turkey per fall turkey license and can shoot hens if one desires. You can purchase one license a day until quotas are met and the quotas for each Hunt Unit are listed on page 9 on the Michigan Wild Turkey Hunting Guide.
According to NWTF study results, Michigan is ranked eighth in the nation for turkey harvest. That’s pretty remarkable considering that I didn’t even see turkeys in southern Michigan until the late 1980s. In my opinion, Michigan turkey hunting is a great hunting opportunity due to an abundance of wild turkeys and great habitat. Happy Hunting!