We Fool Turkey, Waterfowl and Even Crows With Them…

As I look back I must be crazy not using a deer decoy. After all, I use turkey decoys every spring with success, so why haven’t I used one during archery season?
Using a deer decoy had never crossed my mind throughout the twenty-five seasons I had spent pursuing whitetails with stick and string. Not that I doubted their effectiveness in the deer woods, but being a Michigander I had always thought that they were better suited for hunting deer in western states where the terrain was more open. This thinking quickly came to pass when a friend of mine used one on public land to lure in an eight point a few years back. Between his success and those of hunting celebrities on bowunting DVDs, along with hunting shows I had watched, I was convinced that decoys did indeed have a place in a bowhunter’s arsenal. It was time for me to put one to the test during the rut. 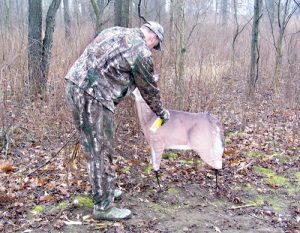 It is essential to spray down your deer decoy with some type of scent eliminator spray after you have finished setting it up. Author photo