Some identification and life history…

Michigan Department of Natural Resource Wildlife Division surveys reveal wolves are present in all the counties in Michigan’s Upper Peninsula. Michigan DNR wolf surveys indicate there is a minimum wolf population of 662 adult wolves. This is a minimum population since young of the year wolves are not surveyed. Wolves seem to draw strong opinions from Michigan residents, outdoor enthusiasts, and amateur wildlife photographers. I have observed recently there is considerable misunderstanding in Michigan of wolf identification and facts about their population and life history.
I have posted DNR wolf biologist confirmed wolf photos on several popular Facebook sites including Michigan Nature, Pure Michigan Wildlife Photography, Nature through Michigan Eyes, and several other U.P. nature sites. Many of the comments by outdoors persons and amateur wildlife photographers insisted these photos were of coyote or in a few cases “coywolves.”
On several sites there was a high rate of misidentification. Of 95 specific comments regarding wolf versus coyote identification, 87% insisted the wolf photo was of a coyote. Five percent of the comments identified the wolf as a “coywolf” and only 8% agreed it was definitely a wolf. Many people felt extremely strongly it could not have been a wolf. 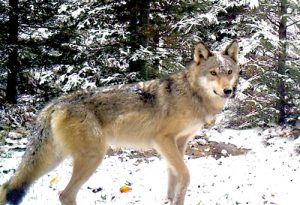 Michigan DNR U.P. wolf studies indicate the average adult female wolf weight at 76 pounds and average male at 87 pounds with a record of 116 pounds. For coyotes that the U.P. Predator Study found an average 24 pounds for females and about 30 pounds for males with a record of 38 pounds. Wolves at all ages have relatively longer legs and bigger feet than coyotes. Wolves have a more blunt snout with coyotes having a pointed nose. This wolf was within the Ottawa National Forest in Northwest Iron County.