“When two objects collide, there’s a reaction to the action.”

As I recall from high school physics class, that’s a rough paraphrase of one of Newton’s Laws. Many years later I realize there’s also a “push for every pull” when it comes to human behavior.
Do you remember a special teacher or friend who made a difference in your life? Someone who influenced you in a way you’ll never forget?
It happens every time we go hunting or fishing with someone else. We may not know it in the moment because we don’t usually think about it in the moment.
Consider, for example, what occurs while bird hunting if you pick up your just-fired shotshells and put them in a jacket pocket instead of leaving them in the field. I always collect my own hulls, along with others I come across, a habit that began a long time ago when I witnessed another fellow do it. 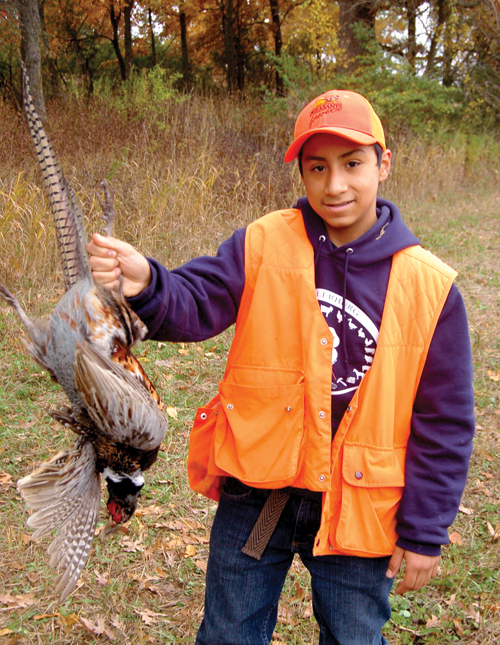 The author’s son, Daniel, with his first pheasant taken during a Youth Pheasant Hunt at Augusta Creek State Wildlife Area. Sometimes the best influence we can have as a parent is to step aside and allow our kids to own their own experience!

The influence of what we say or what we do can be far reaching. It’s like a pond ripple that spreads when a bass leaps to the surface.
Recently, I was reminded of this truth when a man approached me during a youth pheasant hunt on public land in southern Michigan. We were among several adults who had volunteered our bird dogs for the event.
“Are you Tom Huggler, the writer?” he wondered.
“Umm, guilty as charged.”
“Thought so,” he said. “I just want you to know your book on woodcock hunting is the reason I bought a bird dog.”
“You’re kidding, right? Really?”
“Really! Thank you for writing it.”
When the hunt was over, it was my turn to thank him. That’s because my son Daniel, 14, shot his first-ever ringneck after the man’s dog, a wire-haired griffon, pointed it. It is certainly true that what goes around does come around.
The influence we sportsmen and women have on others is especially profound when the influence—whether positive or negative—is hiding in plain sight. For instance, I learned something else that day, a bright-light moment I can’t get out of my head.
Let me explain.
Over the past couple of years, I had taken Daniel bird hunting several times but without success. I couldn’t wait to watch him count the bar markings on the tail of his first rooster. I wanted to see him admire those brilliant, oil-slick feathers on the bird’s regal chest, to discover the sharpness of its spurs when pricked with a finger. I remember doing that more than 60 years ago when I shot my first pheasant. I often do it yet today.
The revelation that came during the youth hunt was that I wanted the “Ah ha!” moment for Daniel more than he did. To assume he would experience killing his first pheasant in the same way I did was not only presumptive, you could argue it was selfish on my part. I was trying to recapture a cherished moment from long ago.
To be sure, Daniel was proud indeed of his feat but that was also because he wanted me to be proud of him. In truth he might have experienced lack of success—once again—had I tagged along as his coach or cheerleading father. With 36 other kids participating in the youth hunt, surely there was enough peer pressure, though unspoken, to perform. Pairing Daniel with other youth in a different field than the one where my dog and I were assigned was the right thing to do. He made a new friend, all on his own, and the boys said how much they would enjoy hunting together again.
Daniel and I talked about all of this on the drive home. That’s when I remembered how someone else had to teach Daniel how to swim when he was a toddler because I was not the right person for the job. Sometimes the best influence we can have as a parent is to step aside and allow our kids to own their own experience.
Last night was Daniel’s first 8th grade basketball game. I volunteered to keep the clock, which assured my focus would be on the game and not how my son was performing. The only other option was to sit in the bleachers with duct tape over my mouth.
The kid scored four points and stole the ball a half-dozen times. He didn’t need my help after all.