Most hibernation is understood – but not all

We all know the story of Punxsutawney Phil, that rather rotund groundhog (aka woodchuck) that hogs the media stage on Feb. 2, as breathless crowds await his false forecast of the weather as he shares shadowy “breaking news” of spring’s approach. Sometimes he gets the forecast right, he often gets it wrong, but we look forward to Groundhog Day just the same.
One thing is certain. Groundhogs are true hibernators and last month they went into their usual feeding frenzy to prepare for their long sleep, a survival strategy fine-tuned by eons of evolution. According to the National Wildlife Federation, “While hibernating, the groundhog’s heartbeat slows from 80 beats per minute to 5 beats per minute; their respiration reduces from 16 breaths per minute to as few as 2 breaths per minute; and their body temperature drops from about 99 degrees Fahrenheit (37.2 Celsius) to as low as 37 degrees F (2.77 C)” 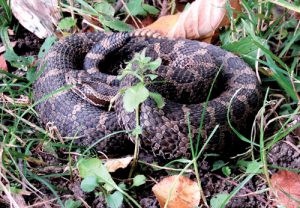 Massasaugas hibernate in crayfish burrows below the frost line, partially submerged in water that prevents their bodies from freezing.

Snow now blankets the woods, fields and wetlands of Michigan and groundhogs are in their second month of deep sleep, perhaps dreaming about next year’s garden gluttony. Groundhog hibernation is well understood but there are two other creatures in Michigan that practice what some might call strange hibernation strategies. One of them is the eastern massasauga rattlesnake, Michigan’s only venomous snake. The massasauga is sometimes known as a “swamp rattler” because of their wetland habitat preferences and is listed as a threatened species by the U.S. Fish and Wildlife Service under the Endangered Species Act. They are found throughout the Lower Peninsula with Southeast Michigan, especially Oakland County, being something of a stronghold for this species. They are not found in the Upper Peninsula.
Massasaugas live mostly in marshes, fens, wet prairies, and low areas along some rivers and lakes with the adjacent uplands used for basking, reproduction and hunting their primary prey, mice and voles. By the time pumpkins were coated with frost they “vanished,” but they did not travel far, they slithered downwards, about three feet down into a wet underworld.
Eastern massasauga rattlesnakes hibernate, although in the world of snakes that process of overwintering dormancy is properly called brumation. Severe periods of subfreezing weather can directly kill a snake, but cold-induced sluggishness also means our rattlesnakes would be less able to hunt for and then digest prey. That fact makes finding a hidden and insulated overwintering den, known as a hibernacula, essential. Although some will hibernate under large decaying logs or seek out a mammal burrow, research has revealed that many of them, perhaps most, seek out crayfish burrows for their hibernation.
Unlike some species of rattlesnakes that hibernate together in large groups our recluse swamp rattler is a solo player and down deep in a crayfish burrow close to the water level and below the frost line is perfect for a six month snooze. And that is where they stay in a state of near suspended animation hidden from view, and protected from extreme killing cold.
I am not a herpetologist but my more snake knowledgeable friends explained it this way, “When they hibernate in crayfish burrows below the frost line they are partially submerged in water, and that prevents their bodies from freezing. It’s important to remember that subterranean water that does not freeze is a critical component of their hibernation site. This is a safer and more efficient then curling up in dry groundhog burrow.”
In early spring after they emerge from their underworld they will spend much of their time basking in sun before moving to upland summer habitat to hunt mice and search for mates.
The idea of spending six months cohabiting with crayfish in a dark tunnel three feet under the ground may seem strange but perhaps the strangest Michigan phenomenon in the world of reptiles and amphibians when it comes to hibernation is what happens to wood frogs as the mercury settles below the freezing mark.
Wood frogs are found throughout Michigan and are the only frogs that live north of the Arctic Circle. They live in fertile woodlands hunting worms, spiders, insects and snails. During winter they take shelter under leaf litter, and in spring they head to vernal ponds to mate and lay eggs. What is remarkable, and seems to be something out of a science fiction movie, is what happens under the leaf litter, out of sight of human eyes.
It’s amazing enough that a wood frog can transform from a tiny tadpole in a vernal pond to a land-living frog, but in the winter they hibernate to the point they freeze like a block of ice. Wood frogs survive six months of hibernation with much of its body frozen. There is no heart beat and no respirations, a sure confirmation of death in most creatures. But not for the wood frog. As autumn raced towards winter they crawled under thick layers of leaf and forest debris and entered what could be described as a death-like condition yet they are alive in a state of suspended animation that remains under study and not fully understood by scientists. Their liver produced a large amount of glucose that worked as a natural antifreeze to keep their body’s cells from totally freezing but the frog resembles and feels like a block of ice carved in the shape of a frog.
This mysterious strategy allows wood frogs to survive without a bite of food for months on end and then as they thaw in early spring their hearts begin to beat spontaneously once more. The newly active frogs then hop off to vernal ponds that may still have traces of ice and begin their duck-like quacking that lures in mates and signals to humans that spring has returned to our woodlands and wetlands.
Jonathan Schechter is the Nature Education Writer for Oakland County Government and spies on snakes, frogs and toads when exploring the State’s woodlands. Email: oaknature@aol.com