We have heard a lot about “hunt your hunt” recently. The phrase relates to a reaction to some Michigan hunter’s desire to fill the freezer with venison and hunters wanting antler point restrictions hoping to see big antlered bucks in their area consistently. This is not a story about that argument. This is a story about a growing number of Michigan hunters who are on the cutting edge, harvesting big bucks year after year, and it doesn’t have anything to do with regulations. It is about how two or three hunters can make a difference on the quality of bucks they manage on small tracts of land in Michigan. It is also a story about a great passion for deer hunting and about year around preparation, year around devotion to the art of deer hunting. 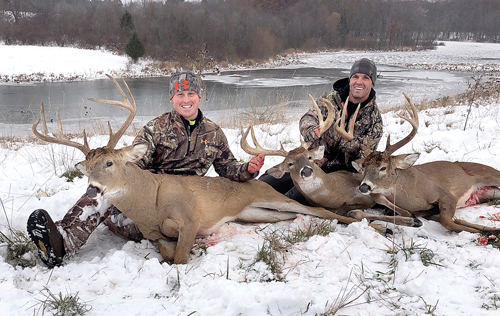 Drew Porter (left) and Corey Memering (right) with another deer season of harvesting giant Michigan bucks. It’s a year-round passion and commitment for the trophy hunters.

Drew Porter and Corey Memering both scored on two beautiful bucks again this year. There is clearly something very special going on with these two hunters as last year Drew harvested a beautiful 172-inch buck and Corey took the giant 227-inch whitetail that will be in the top few bucks in the Pope and Young whitetails record book for Michigan. After seeing their success again this year it became clear that they have a good management plan going. They were willing to share what they do year after year.
They do not own a huge tract of land and in fact hunt around 200 acres, most of which is leased. They also have some property in Ohio they have access on, but the bucks shown are all Michigan deer. One of the things heard over and over and over when talking about shooting a handsome buck in Michigan is it is imperative to let the 2.5-year-old bucks walk. This is their main principle of management. They do try to maintain a positive relationship with neighbors, trying to keep everyone in big-buck heaven and emphasizing the need to allow the 2.5 year-olds to live, but we all know how difficult it can be on the last weekend of gun season and it’s going to be tag soup if we let the 117-inch 7-pointer walk away. These hunters let him walk and are in the stand the next day with the bow again. Drew stated he normally passes on 10-15 bucks a season. Think about that for a minute. That in itself separates these hunters from many of us.
Another habit that is very high in their big whitetail bible is ‘disturbances.’ They don’t…period. Stands are hung before the Fourth of July. They try to identify the bedding area and avoid it like the plague. They only check trail cams in December to see which bucks made it through the season then only two more times in late summer. Even then, they only pull cards in the rain, so scent and noise are minimal. It really seems as if they try to treat the entire property as the bedding area.
They do plant food plots. Mostly several varieties of clover. Interestingly they don’t hunt them a lot, but it does provide a great deal for their local herd and may keep the doe around which in turn keeps the bucks close. Drew mentioned he loves to plant the food plots with his dad Mike Porter. He said they get a lot of satisfaction in watching the deer pour into their food plots that they put in. Most of their food plot work is done by May giving plenty of time for the deer to acclimate.
The most important part of this story is even two or three hunters hunting a small lease can still manage for quality whitetails. Passing on smaller bucks has a cumulative effect on the herd.
Drew states they committed to this practice five years ago and it has made a tremendous difference in the quality of bucks they are seeing today. In states like Michigan where folks may take those smaller deer, we certainly should not be complaining about state regulations when other hunters have clearly exhibited the ability to take nice deer year after year. If a big buck is the goal, pass those little guys. If meat is the goal, then shoot that spike and take that extra doe. Bottom line is we all can hunt our hunt as we have tremendous whitetail opportunities in our state.