Bobcats are extremely stealthy. They are mostly nocturnal, making sightings even more rare…

Bobcats are an extremely stealthy animal. Although bobcats are relatively common, especially in Northern Michigan, most avid outdoor enthusiasts rarely see this elusive wild cat. Bobcat are primarily nocturnal which also leads to less sightings by outdoor enthusiasts. With the proliferation of game cameras, bobcat are recorded, but not as often as many other wild creatures in the Northwoods.
“Michigan Department of Natural Resource Wildlife Division surveys reveal bobcat are present throughout Michigan,” said Adam Bump, Michigan DNR Furbearer Specialist.
Michigan DNR has not conducted widespread bobcat population estimate surveys, although their monitoring of bobcat harvest indicates “Michigan bobcat population is stable to increasing,” based on relative abundance. Wisconsin DNR, whose area is ecologically similar to Michigan, has been conducting bobcat population estimates. Wisconsin DNR Wildlife surveys indicate their fall population to be 3,800 bobcats in Wisconsin in 2019. This is an increase since their initial population estimate of 1,600 in 1983. Wisconsin considers their current State bobcat population to be “robust.” 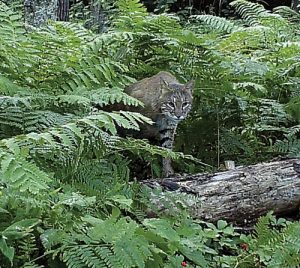 A bobcat stalking through the ferns in the Ottawa National Forest in an area frequented by snowshoe hare. Daytime photos of bobcat have been hard to come by, even with a game camera most of the author’s photos of bobcat are at night. Author photo

Tyler Petroelje, Research Biologist for the MDNR/State University of New York – U.P. Predator Study, completed bobcat population estimates in two out of three study areas of their long-term study. Petroelje stated for the Escanaba study area bobcat were found to have an average density of 0.8 bobcat per ten square miles. For the Crystal Falls study area, the estimate was a little higher at 1.0 per ten square miles. Petroelje said they are still waiting on the genetic analysis from the fur snare survey for bobcat abundance in the Baraga/Kenton area (2017-2019) though bobcat populations north of M-28 appear less than both Escanaba and Crystal Falls, with very few bobcat detections during the survey. To give some perspective, Petroelje indicated coyote abundance was at least five times bobcat in the same U.P. areas.
MDNR wildlife studies indicate an adult bobcat typically weighs between 15 to 35 pounds. Adam Bump stated females tend to be smaller than males and a 30-pound bobcat is considered a big cat. Bobcat live their lives as solitary animals other than mating or the rearing of young. Bump said a typical litter of bobcat is one to four young. They use dens but do not dig their own, rather use other animals’ underground dens or hollow logs, crevices in rock, etc. Bobcats typically mate in February and March with a 50-day gestation period. Bobcat young are born in the spring and according to scientific literature can live up to 12 years in the wild.
Bobcat prefer a habitat mixture of younger successional forest, brushy areas, and edges with a mixture of heavy cover swamp habitat. Bump has not observed the population cycling that has been documented in the bobcat’s relative the Canada lynx, associated with fluctuations in the lynx’s main prey, snowshoe hares. Canada lynx are native to the boreal forest of Canada. Bump’s DNR data does indicate more of a population cycle in U.P. bobcat populations than in the Northern Lower Peninsula. Perhaps this is due to more ups and downs in prey like snowshoe hare as a primary food in the U.P. Bump stated that bobcat are typically more generalists as a predator than Canada lynx, preying on a variety of rodents, ground birds, and some fawns. Tyler Petroelje of the U.P. Predator Study said that bobcat are effective predators on fawns but to put it in perspective not nearly as much as coyote, due to bobcat’s lower population density compared to coyotes.
Bump has observed “the Southern Lower Peninsula bobcat population seems to be expanding but it is likely not as robust as the Northern Lower or Upper Peninsula. Anecdotally, we seem to be seeing an increase and expansion. Some of this could be the increase in use of trail cameras, but in some preliminary bobcat work on State Game Areas, we have been able to get pictures of bobcats in areas we expected they might be.”
Bump thought that bobcat do not substantially compete with other Michigan predators although their prey does overlap with some. I have had trail camera photos of a bobcat in a standoff with a large raccoon over food.
Michigan has a limited and regulated hunting and trapping season on bobcat. All harvested bobcat must be registered with the DNR and the annual limit is one to two depending on area of State and Private or Public Land (see page 4 of the Michigan Fur Harvester Digest).
Highly experienced predator hunters also consider bobcat to be very challenging to hunt. One seasoned U.P. predator hunter told me coyotes can be difficult to lure out for a shot with predator calls, although he considered bobcat to be the most difficult. According to him, bobcat would hang up at the edge of cover and watch motionless for long periods of time making sure there was no danger. Another seasoned hound hunter that sometimes hunts bobcat reports that they are not easy for the dogs to consistently scent and run. He felt winter was the only period where his dogs could stay on a bobcat scent.
As stated previously, bobcat are extremely stealthy. They are mostly nocturnal, making sightings even more rare. It took me many years living, working and photographing wildlife in the U.P. just to get a couple of decent daytime bobcat photos. If you happen to observe one of Michigan’s most elusive creatures you should consider yourself lucky.