I had plans to hunt what I consider to be my best stand, but changing wind directions altered those plans. I decided to sit in a stand a few hundred yards away from the treestand I originally planned to sit. Sure enough, around 5 p.m. this buck walked through the food plot and hit a scrape on the edge of it before walking right past the stand I planned on sitting that night. He proceeded to hang around in the area until probably an hour after dark before I felt it was safe to leave the treestand. I had to take a non-conventional route to get back up to the house as he was blocking my normal egress to this section of the property.
That Saturday was a wash out and I was attending the Michigan football game so I couldn’t hunt that night. Sunday came around and I had the opportunity to hunt the original stand I wanted to hunt. I got settled in early and sure enough around 4:30 he came from the exact same spot and was headed right towards my stand. He worked the same scrape he did the previous sit but this time a doe in the food plot caught his attention. The buck chased her right past the stand I was hunting two days prior. I knew I only had another day or two of this deer’s time in the area as he was an interloper on the property and was focused in on the same doe both nights (she has what looked like a small tumor or something of the sort under her chin).
I decided to take a half day vacation and hang a stand close to the scrape that he hit both nights prior. I knew he was bedding close to this area, easily within 200 yards. A neighbor came over to help hang the set (as quietly as we could) and I was sitting in the stand by about 3 p.m. that afternoon. His normal time to surface in the food plot came and went. I was feeling like I may have bumped him out of the area and ruined any chance of getting him in bow range. As soon as I was getting discouraged I saw him weaving his way through the swamp grass towards the food plot, closely following the same doe he had the past two sits. The doe walked within 10 yards of the stand I was sitting in so I felt pretty confident he was going to give me a shot.
As the doe passed, he held up in some small sumac trees and proceeded to rub them for what felt like ages, although it was probably only five minutes. Finally he made his way over to the scrape and began working the licking branch over. He gave me a 20 yard slightly quartering away shot. After the shot he ran about 40 yards, and expired in the food plot.
This was, by far, the biggest deer I had ever harvested and having him go down within sight of the stand gave me time to just take the moment in and appreciate the events that had just unfolded. We rough scored him at 147 inches and he dressed over 210 pounds.

A little bit of backstory on this deer. This deer was relatively famous in the neighborhood; many of the neighbors had pictures of him from the previous year. He was a perfectly typical 10-point with a split left G2. This is how he earned the nickname “The Split G2 Buck” (I know, real creative right?) 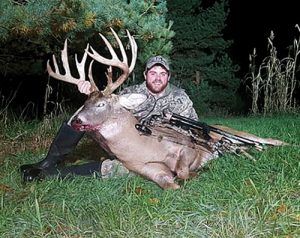 He was pretty much a ghost most of the year with only a couple of people getting pictures of him during the daylight during the season. That season came and went, nobody was getting pictures of him towards the end of the year and we thought he may not have made it. Around February we got a handful of pictures of him proving he made it through the year and we all knew his antlers would blow up the following year.
Summer rolled around and I had been running trail cameras for a couple of months with no signs of any decent bucks in the area at all. Feeling a little perplexed as to where the couple decent bucks we had disappeared to last year I pulled the card on one of the cameras I just lazily put up on a fence post because I didn’t know where else to put it. To my surprise there was my first picture of the buck; “The Split G2 buck.” This year both G2s were split with what looked like a split G3 as well. From that point on a few of the folks in the neighborhood were getting pretty consistent pictures of the deer.
We have a pretty tight knit group of neighbors and we share pictures somewhat often. His movement had shifted to a different area of the farm to being more concentrated on some of the neighbor’s property. To this point nobody had gotten a daytime picture (that I know of) of him during the season, but he was appearing on cams closer and closer to shooting hours. I passed on a lot of good bucks this year holding out for a larger deer than I had ever harvested (the first one I shot) in hopes that if I ever did get an opportunity with the split G2 buck in range I would still have a tag. I had taken the beginning of the week off to hunt with my dad and uncle but movement was extremely slow during those few days.
On Nov. 11, I sat the same treestand I shot my first buck out of. I got out a little late, around 3:30 or so but I snuck in the treestand with a few fawns within 100 yards of me. Shortly thereafter a small buck began bumping does around the food plot. A doe came through the food plot screen and I saw a big bodied deer with what looked to be a large rack on its head but it was facing straight at me so I couldn’t tell what deer it was. As soon as he turned I knew it was him. The doe he was tending was eating in the food plot five-yards from my treestand and he proceeded to work three different scrapes at 45, 40, and 35 yards away from me. When he got to the 35 yard scrape I drew my bow and tried to settle my pin on his front shoulder. I had practiced all summer out to 55 yards and felt comfortable at that distance shooting at a target but for whatever reason something didn’t feel quite right in the moment. The doe was only five-yards away from me and I knew he wasn’t going to let her out of his sight. I let the bow down in hopes that he would give me a closer shot.
He began walking away from me and hit a scrape behind me at 55 yards, then turned and started coming towards the doe. There was a gap between two trees that he was going to walk through at about 15 yards and give me a perfect shot. As his head disappeared behind the first tree I drew my bow back and waited. When he entered the opening the doe took off without warning and he followed suit, running over 200 yards into the woods before stopping. I instantly started kicking myself in the butt for not taking the first shot I had and watched as I was certain he was going to walk out of my life for good.
He stayed with her in the woods for probably 20 minutes as more deer filtered into the food plot. At that point there was a 3.5-year-old nine-point bumping does around in the food plot, one of which he chased right towards the split G2 and his doe. When he approached, the split G2 buck chased him off and the doe he was tending ran right past my stand. At this point I knew I had him, he came in and rubbed on the same trees my first buck did, hit the same scrape my first buck did, and got shot standing in almost the exact same place my first buck did.
He ran off into the woods. A couple of the neighbors came over for the recovery and we found him shortly after, about 60 yards from where I shot him. He was rough scored at 176 inches with 14 scoreable points. He dressed over 185 pounds.
Getting the first buck would have more than made the season right there but to be able to top it off with such an incredible buck isn’t really the icing on the cake in terms of the season, it feels like a whole new, extra cake. Passing younger bucks makes hunts like this possible. I would encourage everybody out there to sit down and talk with your neighbors about the area’s goals for deer hunting. You may be surprised how much you actually have in common when it comes to goals. It has made the experience significantly more enjoyable and I am glad that I have neighbors that I could share this experience with.