National Institutes of Health, June 2019: “Fish tapeworm infection inhumans is seeing a resurgence due to changes in eating habits as well as globalization. It is estimated there are 20 million human cases worldwide.” How many are there in Michigan? Two or three, a couple of dozen, hundreds? No one knows…

Human infection by the “fish” or “broad” tapeworm occurs throughout the northern hemisphere because the parasite, Diphyllobothrium sp., prefers cold waters (there are no reported cases in either Africa or Australia). The National Institutes of Health issued their warning (above) and the World Health Organization has named tapeworm infections as among the top five major neglected diseases. But because the usual symptoms of infection are mild and easily cured, the Michigan Department of Public Health quit keeping records of tapeworm infections almost 45 years ago. With raw fish dishes becoming more common, perhaps it is time to reconsider that position. 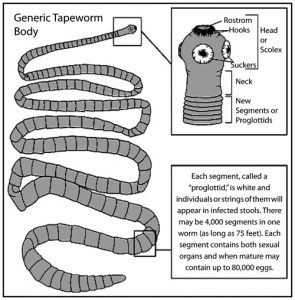 “An Upper Peninsula woman got a 35-foot fish tapeworm from eating undercooked lake trout from Lake Superior.” When my professor at the University of Michigan Biological Station near Pellston, Dr. Harvey Blankespoor, said this to our class many years ago, it stuck in my mind like super glue.
How was that even possible? We have twenty-seven feet of intestines and the worms curl up and back on themselves.

During that summer, I learned firsthand that the natural world is literally crawling with life hidden inside—and feeding on—the bodies of other living creatures. In what was surely the hardest college course I’ve ever taken, I collected half a dozen songbirds, carefully dissected each of them, removed all of the parasites I discovered, then spent hours meticulously staining the worms different colors to reveal their organs and permit identification from the various hooks and suckers on their heads. From the tiniest songbird to the biggest bear, animals are packed with worms and other parasites. That’s nature: anywhere life can find a way, it does.

Diphyllobothrim latum, hereafter referred to as simply the “tapeworm,” has to pass through multiple hosts during the course of its development, starting with a tiny freshwater crustacean (or copepod) that swallows the tapeworm eggs or microscopic larvae; next a minnow or other small fish eats the copepod, and the tapeworm develops further; then game fish like pike, salmon, trout, and walleye eat the infected smaller fish. Finally the immature tapeworm is consumed along with the fish’s flesh by the definitive host—humans, bears, cats, dogs, and other fish-eating mammals, even fish-eating birds—where it attaches to the intestine with suckers and hooks on its head and absorbs nutrients from both the intestinal contents and the body of the host. There it grows nine inches a day and lives for up to 25 years, producing as many as a million eggs a day which pass back into the water in the host’s feces to start the whole cycle over again. In 1961 a scientist reported recovering sixteen tapeworms, each about 63 feet long, from an adult man in Finland.

The earliest evidence of human tapeworm infection dates to 10,000-4,000 BC in Peru, with eggs from 4,000 BC found in both France and Germany. Current knowledge points pretty definitively to cohabitation with humans since at least the Early Stone Age.

The first reported human case of fish tapeworm in the New World was in 1906 in a child living in Minnesota. By 1928, scientists predicted that the tapeworm would become common in Michigan’s Upper Peninsula because immigrants from Finland, Sweden and other Baltic countries settled there, bringing the tapeworm with them. Fish tapeworm has long been common in northern Europe because of the cultural habit of eating uncooked and marinated fish. There were no regulations screening immigrants for parasitic diseases at that time, and for that matter there still aren’t, which is another question altogether. Since then, evidence has emerged suggesting that the fish tapeworm has been in the New World all along, naturally occurring in native peoples, bears, and in particular Great Lakes and Canadian fish.

Though not deadly, tapeworm infection is not without its dangers. The initial symptoms are bloating and bloody diarrhea. Depending upon the density of worms, intestinal blockage may occur. Chronic infections can lead to Vitamin B-12 deficiency because for some reason the tapeworms have a strong affinity for that nutrient and can suck most of it out of the host’s body. This can result in nervous system as well as anemia and other problems. “Dewormers” quickly clear out infections, though the disintegration of the worm can release some toxins.

The fish tapeworm attaches its head to the intestinal wall, and the remainder of the body, consisting of thousands of segments, called proglottids, streams or curls freely along the length of the hosts’ intestine. Fish tapeworms can live for up to 25 years in the human host, and grow to 75 feet in length. The segments furthest from the head of the tapeworm are filled with thousands of fertile eggs, which exit the host with the feces, presumably making their way to water where their lifecycle continues.

Easy to Avoid
Cook your fish well done! Beware: smoking, pickling, drying and marinating do NOT kill tapeworms, their eggs or larvae. Freezing is effective only at -4º F for a period not less than a week. Most home freezers do not reach temperatures low enough to kill the organisms. During commercial freezing, the fish is frozen at least to -35º F and kept at that temperature for fifteen hours.

Tapeworms in Saginaw Bay Walleye
About a decade ago, fishermen began reporting tapeworms in the body cavities of their Saginaw Bay walleye. They started to appear because of changes in walleye feeding habits caused by the elimination of alewives and the invasion of zebra mussels. Walleyes began to consume a disproportionate number of infected intermediate host fish. These worms, some of them newly arrived from Asia (oh, thank you China for all the awful goodies you’ve sent us!), while infecting almost 100% of walleye in the region, are in their final host and believed not to be infectious to mammals, including people. Quickly cleaning fish after they are caught, discarding the entrails on land (it is illegal to dump them into the water), and cooking at high temperature eliminate the parasites.

Happy Eating, Really
So no fears. Just don’t eat the latest fad raw fish dishes like Oriental sushi and sashimi, or ceviche, a Central American specialty of raw fish “cooked” in lemon or lime juice. (Obviously juice doesn’t “cook” anything.) I am a happy fish eater and, not that it matters, my freshwater favorites are yellow perch and walleye. Luckily where I live in the eastern U.P. there are plenty of restaurants serving fresh fish, if you don’t catch them yourself.