December gluttony, January regret and resolution. The cycle repeats every year and supports an entire industry of mega-gyms with every contraption imaginable except for enough floor space for free weights. Discounted “globo-gym” memberships aren’t the only way to keep your New Year’s resolution to improve your fitness level, though. Buckle into a pair of snowshoes and burn more calories while having more fun than possible on any treadmill under fluorescent lights.

The cliché is that if you can walk, then you can snowshoe. While the calories you burn are dependent on a variety of factors including the snow depth and conditions, terrain, and the weight and efficiency of the person snowshoeing, a 200-pound person can burn more than 600 calories in an hour of snowshoeing. That’s the last thing on my mind when I’m snowshoeing, though. I’m focused on the woods around me, and often specifically the trees and the squirrels that might be on them.

I like to combine snowshoeing with squirrel hunting in the winter, as it allows me to travel more efficiently in the woods than post-holing through snow crust when I’m hunting and provides a focus and potentially protein to my snowshoeing. Some winters I’ll combine it with snow camping, too, adding another dimension to the adventure.

A couple years ago I snowshoed into an area where I deer hunt in the Pigeon River Country State Forest with a two-day backpack and a recurve bow. In January, though, this also allowed me to scout for sign of deer that made it through the previous hunting season while squirrel hunting and stump shooting. I set my hammock camp up on a hill near some hardwoods and hunted squirrels without success while practicing my shot on old stumps. Before darkness fell, I snowshoed back to camp and gathered dead and downed branches for firewood, cutting them to length with my hatchet. 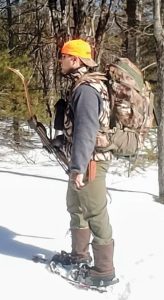 Combining snowshoeing with small game hunting and camping adds to the adventure.

I built a fire that I could reach from my hammock and would warm my backside in the night, cooked one of my mom’s homemade pasties on the fire, and read a little of Aldo Leopold’s Sand County Almanac. I slept when the fire was warm and cut more firewood and built the fire back up when I got cold. Life reduced to the simplicity of either get up and build a bigger fire or freeze and die. And then snowshoe back out the next day with a fresh perspective on the trivialities of the modern world.

Snowshoeing for fun and fitness doesn’t have to be so intense, though. It can be as simple as going for a short hike, or as challenging as trail-running with them. If you’re a small game hunter, make them part of your hunt, whether with a recurve or a rimfire. Or just keep a pair in your outdoor kit for hunting, ice-fishing, trapping, or snowmobiling. They’ll come in handy when you least expect it and most need it.

Two years ago I planned a fast-packing trip – a combination of trail-running and backpacking—on the High Country Pathway in April, but a late snowstorm covered the trail with a foot of snow. My snowshoes were still in the back of my SUV where they stay all winter, though, so I just modified my plan and did an out-and-back overnight snowshoe hike on which I saw an elk, a bald eagle, a hawk, a few deer, and a raccoon. I would have missed that experience without my snowshoes.

Once you’ve resolved to snowshoe, there are a few things to consider when selecting a pair. Snowshoes come in a variety of styles, and from the traditional to modern materials. Consider how you’ll use your snowshoes. Will you be walking groomed trails, hiking or hunting off-trail in the woods, or trail running? If you plan to do off-trail hunting or camping, then you might want the more aggressive tread and beefier bindings of a backcountry style.

Next, pay attention to the weight ratings, and consider not just how much you weigh but also the gear you’ll have with you. Seven years ago I snowshoed into a solo backpack camp in the Pigeon River Country State Forest in December for late bow season in a pair of snowshoes rated for my weight, but not for the weight of me and my 50-pound pack. I was post-holing almost as much as if I wasn’t wearing any snowshoes, and my quads let me know they didn’t appreciate it.

You don’t have to break the bank, though. I bought my current snowshoes used. They’re Yukon Charlie backcountry models that support both me and my pack, even with the duct tape holding together the plastic decking on one of them. Most Michigan sporting goods stores have a decent selection, though, where you might also consider a pair of trekking poles to aid you in snowshoeing.

In Michigan, we get snow whether we like it or not. By trading in your treadmill pass for a pair of snowshoes, though, you’ll learn to like it more and help keep your New Year’s fitness resolution. And unlike many New Year’s gym memberships that cease getting used by February, we could get snowshoe weather anytime through the end of April in this state.