Unscheduled stops along the road to awareness

Nothing whispers “early winter in Michigan” more than taking a lazy drive down unpaved side roads on a Saturday afternoon.

No matter the outside temperatures, the truck’s heater maintains civility within. The pleasant crunching of the tires on the snow provides nice background music for the voice announcing whatever bowl season matchup or college basketball game the radio can grab. With luck, the sky will be gray enough to dim the low riding, headache-causing rays from the winter sun. Contentment comes easy.

Certain spots in the countryside can also engage the imagination with their implications.

A medium-sized woodlot extending into an agricultural field from the thicker woods is a likely place for a few white-tailed deer to hunker down and watch the world go by.

With the four-wheel-drive engaged, the truck can handle the slightly threatening road ruts and slip in for a look at the now-bare aspen stand beside the alder-edged creek: a good place for grouse and woodcock. 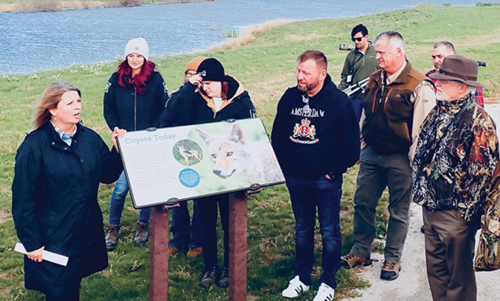 At the Howard Marsh Metropark, Kim Kaufman, Executive Director at the nearby Black Swamp Bird Observatory, explains that in addition to attracting waterfowl hunters “People come from all over the world to see warblers” during “The Biggest Week in American Birding.” Tailfeather Communications, LLC photos

Even a slash pile in a recent clearcut offers the notion of “Cottontails, here.”

Not an animal in sight. But lots of possibilities. After over 50 years of hunting, I think I finally get it: Hope lies in the habitat.

For so many years, I would go all blank at the conservation group fundraising dinners when people would get up and start talking about all the habitat projects the groups were part of. “Give me some huntin’ info,” was my unstated sentiment. The other stuff was boring, or so I thought.

Likewise, when it comes to reading magazines or books about game animals. My eyes have tended to glaze over when they come to the parts about habitat protection and creation.

Last summer, though, a change started to take place.

At the local banquet for the Ruffed Grouse and American Woodcock societies, I found myself donating more cash than usual — not because I needed to win another cooler, orange hat or shotgun — but because I had the money on hand and had actually paid attention to the presentation on habitat projects this time. The group needs money to do its good work.

So it is with Pheasants Forever and Quail Forever who refer to themselves as “The Habitat Organizations.” The Autumn 2019 issue of “The Upland Almanac Magazine” (full disclosure: I am its editor) featured an article by Jodi Stemler that illustrated the essential correlation between the number and intensity of habitat conservation programs in South Dakota and its ring-necked pheasant population.

“It is impossible to separate the connection between quality pheasant hunting and quality pheasant habitat,” Stemler wrote. “The two are inextricably intertwined, and the cyclical rise and fall of both over the past century tells a hope-filled tale for the continued possibility of outstanding hunting.”

Then the results of a new study became news last September. In “The New York Times,” Carl Zimmer reported, “The number of birds in the United States and Canada has fallen by 29 percent since 1970 … There are 2.9 billion fewer birds taking wing now than there were 50 years ago.

“Those estimates include 76 percent of all bird species in the United States and Canada, but represent almost the entire population of birds.

“Grassland species have suffered the biggest declines by far, having lost 717 million birds. These birds have probably been decimated by modern agriculture and development.”

Dr. Kenneth V. Rosenberg, conservation scientist at Cornell University and the American Bird Conservancy, and the lead author of the new study said, “Every field that’s plowed under, and every wetland area that’s drained, you lose the birds in that area.”

You can get an excellent perspective on Dr. Rosenberg’s meaning on your next Spring Break drive out of Michigan, down I-75. During the approximately 45-mile stretch from Toledo to Finlay, take a look — forward and to each side. As far as the eye can see it’s roads, buildings, some farmlands, in short, development. Now, if you will, try to imagine what the vista looked like less than 200 years ago when this was all swamp, as far as the eye could see. One, great, big black swamp.

Before humans drained, cultivated and developed this Great Black Swamp it cut a swath roughly 140 miles long from Sandusky Bay, Ohio, to Fort Wayne, Indiana; and 40 miles wide from Toledo to Finlay. The clay base left by the glaciers that scraped their way across the land is the best kind of soil to retain water. The swamp was thick with trees, muck and murky water, nearly impenetrable. Reports from the time said the water in the swamp was chest deep and stayed that deep until the heat of late summer drew it down some. It was a beastly place, both figuratively and literally. Native Americans have been said to have avoided it because of the swarms of mosquitos, gnats and biting flies that would plaque them. It was home to wolves, snakes, wildcats and other such creatures that made the place formidable, to say the least.

The Lake Erie Marsh area forms the northern boundary of the Great Black Swamp and runs roughly from Toledo eastward to Sandusky. This is an extremely important staging area along the migration routes of waterfowl and songbirds. This is also the location of one of the most important, long-term efforts spear-headed by Ducks Unlimited (DU).

As landscaped by nature, these coastal areas drained swamps and absorbed floodwaters. But then humans arrived with their own ideas about drainage and development, and poof! Water was redirected; land, plowed; roads, built; and humans began taking root.

However, “A lot of this land wants to go back to be wetlands,” says Scott Butterworth, District Manager for the Northwest Division, Ohio Department of Natural Resources (ODNR).

Since the mid-1980s, DU has helped to restore or maintain about 93,000 acres of land in Ohio, at a cost of $36M. About 30,000 of those acres have been in the Lake Erie Marsh area, says Butterworth. But what hadn’t occurred to me before is that DU cannot do all the work itself, and that not all the work can be done on public lands.

Since 96 percent of Ohio is held in private ownership, DU “is not going to achieve our mission without relying on private lands,” says Russ Terry, Biologist for DU’s Great Lakes/Atlantic Region.

He adds, “The Lake Erie Marsh region is the most important waterfowl area in Ohio. You need a mix of habitat and opportunity on private and public lands.

“Available private lands can complement the public lands by taking pressure off them, or providing additional habitat that ducks can spillover onto. More habitat means more food, more areas for the ducks to rest.”

The State of Ohio is helping out. In October 2019, Mary Mertz, Director of the ODNR, announced the next state budget includes $46M from the general revenue fund to support projects benefiting and restoring the watershed draining into Lake Erie. Plenty more help comes in the form of partnerships with other groups or with private businesses.

One project stands out almost as a jewel for all to see as it sits along State Highway 2 about halfway between Toledo and Port Clinton. Howard Marsh Metropark is a 1,000-acre site that attracts hunters, recreationists and birders alike.

“This is the largest Metroparks project ever undertaken,” said Denis Franklin, Natural Resources Supervisor, Toledo Metroparks, last October. “Construction began in 2016, and the park opened in 2018.”

It took a cooperative effort to make Howard Marsh a reality said Franklin. “Two years ago, this was all corn and soybeans.” Partners had to convert the acreage from agricultural use and restore the hydrology of the area in order to give the land a chance to become what it wanted to be … a wetland again. Part of what Franklin calls a “necklace of wetlands along the south shore of Lake Erie,” Howard Marsh doesn’t exist only to attract waterfowl hunters. This location is also a major migration route for warblers, and upwards of 80,000 birders converge on the area each year for the 10-day extravaganza, “The Biggest Week in American Birding.”

David Brakhage, DU’s Director of Operations at the Great Lakes/Atlantic Region said, “When it comes to waterfowl conservation, partnerships are essential. We’ve helped maintain and restore over 500,000 acres in the Great Lakes area.”

That’s about half the size of the original Great Black Swamp.