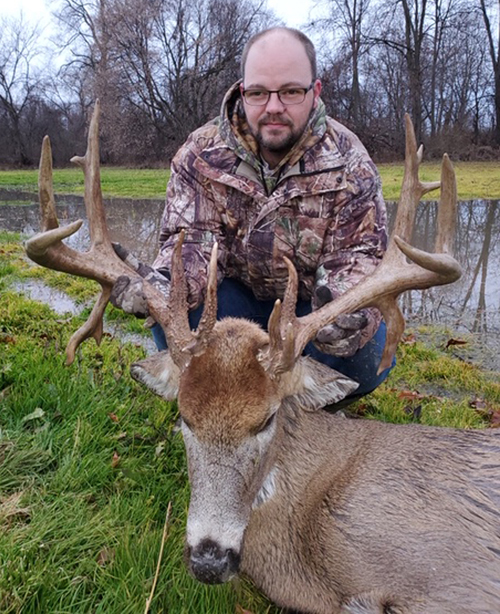 Chris Frey of New Baltimore with his record book buck with a typical 8-point frame, with nine non-typical points including two distinctive drop tines, one on each beam.

Chris Frey from New Baltimore bagged the second highest scoring nontypical whitetail on record for Macomb County, according to the eleventh edition of Michigan Big Game Records, while hunting with a muzzleloader on November 29. The trophy buck has a 17-point rack that grossed 202 1/8 and netted 200 2/8, according to Commemorative Bucks of Michigan scorer Richard Remmert from Richmond.

The county’s highest scoring nontypical was taken in 1992 by Bob (Tex) Dismuke with a centerfire firearm. The antlers on that buck scored 210 1/8.

The impressive buck is the first whitetail Frey has shot in the morning and it was also the first deer he’s taken with a muzzleloader. He scored on the buck about 7:30 a.m.

“I’m typically not successful in the morning,” Frey said. “I was out there hunting on a whim, too. I had the day off and we didn’t have any plans to go anywhere as a family, so I decided to go hunting.”

It’s a good thing he did. Frey said he knew a big buck was in the area. He got a trail camera photo of it in the woods on July 20 and he got several more of it in a soybean field during the middle of the day with three other bucks on August 10 when they were all in velvet. The big nontypical’s body size dwarfed those of the other bucks besides his antlers.

“In mid-October, my cameras went silent,” Frey commented. “I wasn’t getting any photos anywhere. There were no pictures after dark then either.”

Chris did manage to see a 7 or 8-point buck during archery season at 10 yards, but his arrow missed that buck, going right over its back.

“It was a strange year,” Frey said. “I didn’t even get a chance to shoot a doe this year, which is odd.

Chris was in a 5X5 ground blind he made from cedar along the edge of the soybean field where he got photos of the big nontypical on August 10 when he shot the buck, but he didn’t know it was that buck at the time he shot it.

“There was a peninsula of tall grass sticking out into the soybean field about 135 yards away,” Chris explained. “I saw him when he came around that peninsula. He was coming along the edge of the field. I took him at 125 yards. He only made it 10 yards after I shot him and he went down.

“If antlers are wider than the ears, I quit paying attention to the antlers. I get my mind in the game. I didn’t want to get buck fever and that’s probably what would have happened if I had spent too much time looking at the antlers.”

Another reason Chris didn’t identify which buck he was shooting at the time is his eyesight isn’t the best.

“I can’t see very well,” Frey explained. “I’m pretty much blind in my right eye. For that reason, I have to shoot left handed even though I’m right handed.”

The reason Chris was hunting with his .50 caliber CVA Muzzleloader is due to its accuracy. He said the rifle is accurate out to 175 yards when loaded with 150 grains of Pyrodex pellets. He had a Hornady bullet on top of the powder.

After shooting the buck, Chris remained in his blind and texted back and forth with a buddy who was hunting nearby. He texted his buddy that the deer was “huge” and he guessed that it had 12 to 14 points.

Frey was in for a major surprise when he walked up to the fallen buck.

“I was completely speechless,” he said. “I simply stood there and stared and let it sink in. Shooting that deer wasn’t something I was expecting. I’m not a horn hunter by any means. We’re in it for the meat, but this is a real trophy.”

By “we,” he’s referring to his son and daughter. He said he’s been taking his daughter hunting with him since she was 2 years old. She’s now 11 and hunts, too, and so does Chris’ 8-year-old son. In fact, the boy shot his first deer during the 2019 youth hunt, which was a 6-point.

“Hunting has turned into my time with my kids. During the youth hunt in 2018, my daughter had a shot at a 12-point buck, but I couldn’t get her to put her phone down. That’s okay. I want them to have fun when they’re hunting.”

Chris didn’t weigh his buck and he now wishes he would have. It probably weighed close to 300 pounds. He got about 125 pounds of meat from the animal. A taxidermist at Lombardo Taxidermy in New Baltimore aged the buck at 7 1/2.

The rack has a typical 8-point frame, with nine nontypical points. Two of those nontypical points are distinctive drop tines, with one on each beam. Both beams are the same length (28 1/8 inches) and the inside spread is 22 6/8 inches.

At 40 years old, Chris said he’s only been deer hunting about 10 years. He got his first exposure to guns when he joined the Navy. That’s when he learned how to shoot. Friends helped introduce him to hunting. His biggest buck prior to last fall was a 4-point. 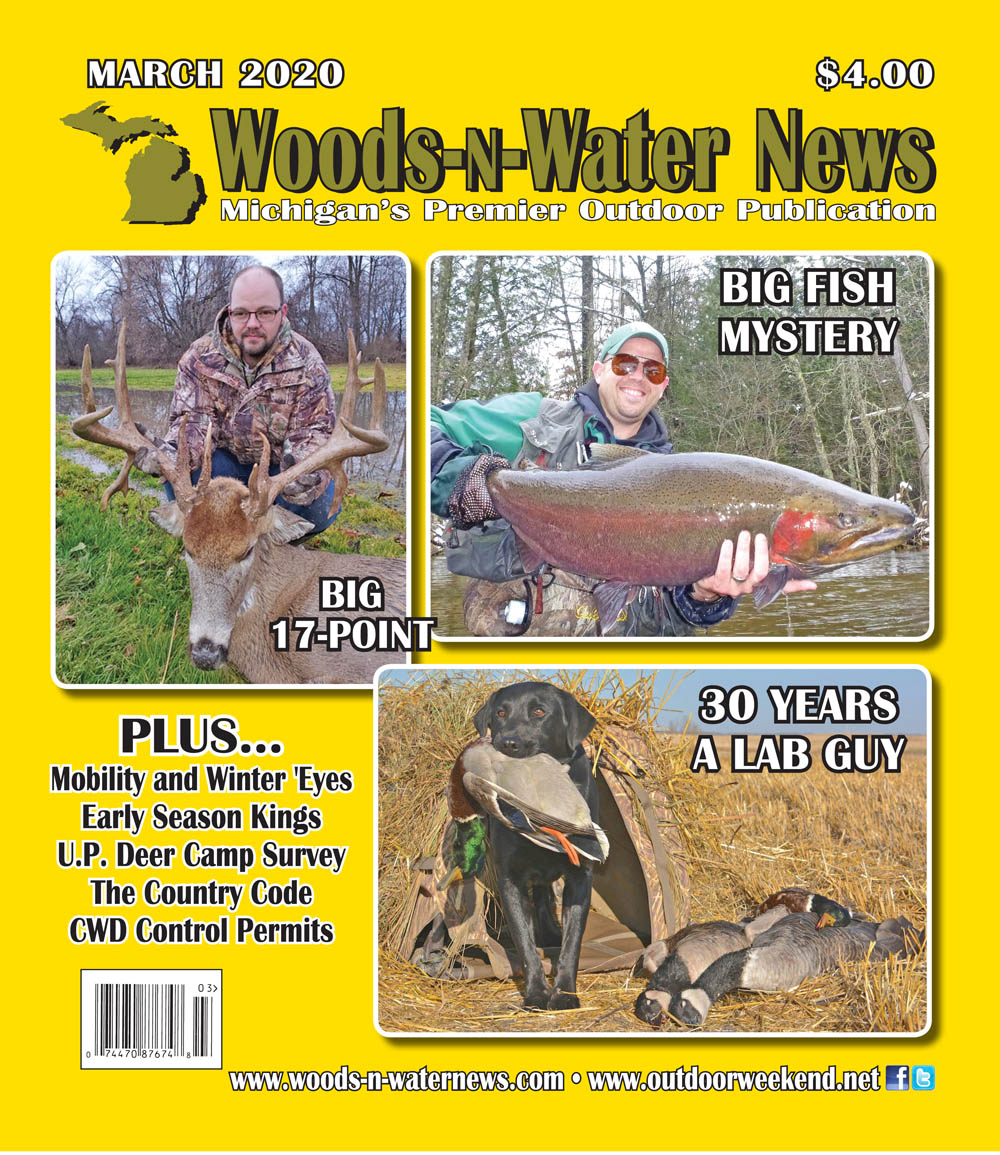