The Detroit River walleye run might be the most exciting, fun time to catch a limit of fish for some tasty fillets. But the idea of heading to the Motor City and launching your own boat to partake can be quite intimidating.

Yours truly was that first-timer last spring, but with some information, basic tackle, a good charge in the trolling motor batteries and a general knowledge of vertical jigging we did OK.

With the walleye run commencing in April, March is a good time to prepare for this world-class fishing event that lasts into May.

Now, I had my boat on the Detroit about 30 years ago in March while deteriorating ice sheets came down from Lake St. Clair, headed for Lake Erie. We were way too early to encounter walleyes and completely skunked.

So here’s lesson Number 1: Wait until the run starts before going. With social media, that’s pretty easy to monitor. 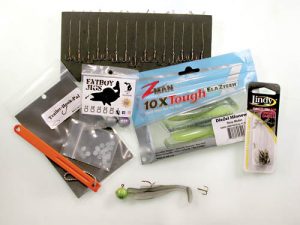 Rigging for Detroit River walleye success includes a heavy jig with a pliable plastic trailer, a stinger hook and a way to keep the stinger hook line straight. You also need to keep the trailer hook in position. All the stuff you need is pictured here.

Okay, let’s talk a simple rig and tackle that can catch some walleyes. It helps to “Keep It Simple, Stupid” as they say.

On the advice of my friend Capt. Eric Long of Long Line Charters, I bought some 1-ounce jigs. Capt. Long often gives his customers 1 ½-ounce jigs to help them keep their lures as close to the bottom as possible. Roy Miller, the brains and brawn behind Michigan-made FatBoy Jigs gave me a great deal on two dozen 1-ounce jig heads in a variety of colors. You can shop for all the FatBoy wares at Roy’s website fatboyjigs.com. Then I got to chatting via Facebook with another Michigan guy, Brett Johnson, and he offered some less fancy, less expensive 1-ouncers. The price was so good I bought 100 unpainted and 25 of four different colors painted. That was 200 ounces of lead jigs and I got in trouble with my better half when she couldn’t lift the 12 ½-pound package out of our mailbox.

Check out Brett’s well-made jigs at ebaystores.com/johnsonstackle67.
Capt. Long also suggested that Z-Man Diesel MinnowZ were reliable soft plastics for the jigs, so I ordered some of those swimbaits in colors that ranged from dark Bad Shad, to lighter hues such as Smelt and Sexy Mullet. I wanted to be covered for different degrees of water clarity and light penetration. The real nice thing about the Diesel MinnowZ is they are made from ElaZtech plastic, which is close to invulnerable. A guy can catch quite a few walleyes on the same plastic trailer without needing to change it.

The other item was a bunch of stinger hooks. Whenever I’ve gone with other anglers in their boats for a springtime walleye trip on The D, almost all the fish we caught were hooked on the stingers’ little treble hooks.

Capt. Matthew Sell of Hot Bite Charters has an excellent Youtube video on how you can make stinger hooks at home with 10- to 12-pound line and No. 1 crimps to form a loop that goes over the jig hook. He uses No. 10 Mustad light-wire trebles. He made a board with two nails to make the stingers just the right length to use with a Wyandotte Worm, a highly popular plastic trailer on the Detroit. The treble comes just to the worm’s end tip. Check Capt. Matt out on his web page HotBiteCharters.Com. Incidentally, Capt. Matt took yours truly fishing on the Detroit several years ago and the fellow knows how to put clients on fish.

I didn’t have time to tie my own stingers, so I relied on Lindy Fishing Tackle 3-inch snelled stingers. These apparently are tied on about 10-pound test and the line was a little curly out of the package. To rectify this and stretch the stingers straight, I stuck them in a foam leader holder from FishEng Products, a small company my Oregon friend Dave Eng founded several years ago. These holders are foam pads with slits, and they made it easy to slightly stretch the line when I loaded up one of the smaller pads with the Lindy Stingers. That worked, and the line got straight enough so the hook hung right behind the Diesel Minnow’s tail. Check out FishEng Products at fisheng.com.

The next challenge was to figure a way to keep the stinger in position on the jig hook. The snells have a Fas-Snap on one end, and it fits just great over the point of the hook, but it needs something to keep it in position instead of sliding around on the hook’s curve. The plastic dip used for coating the handles of hammers, screwdrivers and other hand tools was one option, but instead I tried the Trailer-Hook-Pal.

The Trailer-Hook-Pal is a tool that makes it easy to put small plastic disks on your main hook. I just put one disk on the hook, slid on the stinger’s Fas-Snap and then added another plastic disk with this handy tool, sandwiching the Fas-Snap in place. It worked like a charm. You can buy this American-made product at the company website thehookpal.com. I use this Hook Pal tool a lot for bass fishing, too, and it is worth the $15.

Now we get to rods and reels. I had two fellow Detroit River newbies with me in my 17.5-foot MirroCraft tiller model, and we all used identical spinning combos—they’re the same, reasonably priced combos I use for throwing Ned Rigs and other finesse lures at bass. It’s a 7-foot Shimano Convergence rod with a medium-light action, paired with a Sedona 2500 spinning reel. Altogether these combos cost $130 each, and they are a solid value that you can use for all sorts of presentations. They worked great for vertical jigging the 1-ounce jigs.

Also on the advice of Capt. Eric Long (who also has taken me on a couple of fish-filled Detroit River excursions—contact him through the Long Line Charters Facebook page), I put 15-pound test Power Pro Super 8 Slick braided line in high-vis yellow on the reels. It’s the same braid I use casting little stuff for bass. Eric said I wouldn’t need to add a fluorocarbon leader, just tie the jig directly to the highly visible line. He was right. The fish didn’t seem to care. Perhaps an old walleye warrior I used to hang around with was correct when he postulated that walleyes aren’t real line-shy. “If walleyes were line-shy, we wouldn’t have much of a Native American netting problem, would we,” this fellow used to say.

In a nutshell, our first trip was not productive. We drove over with 13 other guys and four other boats from our church’s Men’s Outdoors Club. We launched at St. Jeans, which is the ramp closest to where the river starts at Lake St. Clair. It cost $10. Then we just fished around the packs of other boats.

The wind howled from the south, so to keep up with the southbound current against the wind, I had to put my Minn Kota Terrova on “high” and point it into the teeth of the gale. The waves coming up the river were big enough that I took one over the bow of the boat.

The water was chocolate milk, and our group only caught five fish altogether, but our boat caught three of them. Not a lot to hang my hat on as a walleye expert, but enough to get me ready to take on the Detroit River walleyes next month with a vengeance.