On Tuesday, January 28, at the Michigan History Center in Lansing, the Michigan Wildlife Council both released findings from a survey on the public’s awareness of wildlife management funding in the state and unveiled an exhibit highlighting six such management success stories. 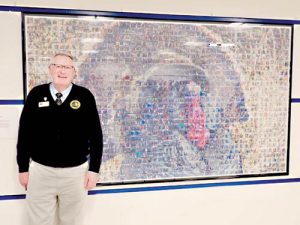 Al Stewart, Upland Game Bird Specialist, Michigan DNR, liked what he saw in the photo mosaic celebrating the re-establishment of the wild turkey population in Michigan. Look carefully, and you’ll see that this mosaic is actually comprised of over a thousand individual photographs.

The council commissioned the study in 2019 to gauge the effects of its public education campaign to help raise awareness of the fact that scientifically-based conservation and wildlife management practices — including regulated hunting and fishing — are essential to conserving Michigan’s outdoor resources. It reported that more Michiganders than ever understand that hunting and fishing license sales pay for the conservation of the state’s water, woods and wildlife.

The survey indicates that 73% of state residents correctly identify hunting and fishing licenses as the largest sources of funding for wildlife management work in Michigan. A similar council survey in 2018 showed 67% of residents knew licenses pay for conservation.
“We’re finding increasing recognition of the positive impact that hunting and fishing have on Michigan — which is exactly what the Michigan Wildlife Council was charged with accomplishing when it was created by the state Legislature in 2013,” said Matt Pedigo, council chairman.

The growing percentage of recognition of the importance of license sales among the target group of Michigan citizens — people mainly from urban and suburban areas in the southern part of the state — also implies a movement away from belief in two “myths” about Michigan’s wildlife, said Nick Green, Public Information Officer for the Michigan United Conservation Clubs (MUCC).

Another key survey finding is the approval of hunting and fishing remains high across all geographic and demographic groups, with 86% of Michiganders approving of recreational fishing and 83% approving of legal, regulated hunting.

The research also shows a growing appreciation among the general public for the economic benefits sportsmen and sportswomen generate for the state, estimated by the MUCC at more than $11.2 billion annually.

“Obviously, sportsmen and sportswomen play a major role in making Michigan a great place to live, work and recreate,” said Amy Trotter, Executive Director of MUCC at the event.

Finally, 75% of residents agree that hunting and fishing license fees have a major or moderate benefit to Michigan, the latest research showed.

The survey was conducted Sept. 15 – Nov. 21, 2019. The sample of 800 responses from Michigan adults ages 18 or older was weighted to reflect Michigan’s age, race, gender and geographic makeup.

Rep. Leslie Love, D-Detroit, co-chair of the Michigan Legislative Sportsmen’s Caucus said, “I applaud the council for the tremendous job it’s doing reaching out to people in Southeast Michigan and West Michigan to encourage greater participation and increase opportunities for engagement.”

The Michigan Wildlife Council is a bipartisan-approved panel funded by a dollar earmarked from the sale of every Michigan hunting and fishing license.

The survey results were announced as a prelude to the reveal of the new Michigan Wildlife Photo Mosaics exhibit, six huge panels — 4 feet tall by 8 feet long each — of species that have had their numbers restored in the state.

Addressing the gathered crowd, Michigan DNR Director Daniel Eichinger said, “None of these (wildlife recovery efforts) would have been possible without the efforts through these partnerships.”

And the exhibit itself would not have been possible without
the participation of over 10,000 other people from throughout Michigan.

That’s because in true mosaic fashion, each panel comprises 1,344 individual 2 by 2-inch photographs, according to mosaic creator Russ Climie of Tiberius Images of Grand Rapids.

Creating each image was not the mind-boggling jigsaw puzzle effort of trying to figure out where to glue each “tile” as one might think at first, said Climie. It was much more simple and relied heavily on technology.

Here’s how it worked. The Wildlife Council worked with photographers to get the photos of the animals to be represented and to mount them in frames. Climie took each photo to a different event throughout the state. He photographed individuals or groups of people. His sophisticated equipment not only produced the photographs instantly but it also told him where they belonged in the mosaic.

“The photo would pop out, and it would say something like ‘Column 22, Row 13’ and we’d find that spot and put it in there,” Climie said, adding, “It was all done in real time.”

For example, the Upper Peninsula State Fair in Escanaba was the site for building the mosaic of the Lake Sturgeon.

“There was a Billy Ray Cyrus concert there that night,” said Climie. “We got people as they were walking in and when they came out, we had completed the mosaic.”

The exhibit is on display indefinitely at the Michigan History Center Café. For hours and directions: michigan.gov/mhc

For more information about the Michigan Wildlife Council: hereformioutdoors.org