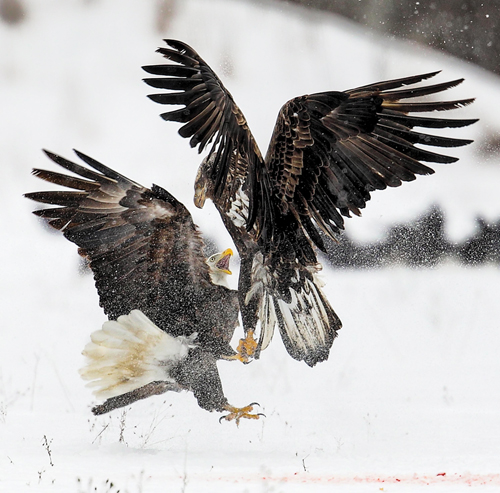 Female eagles can be 25 percent larger than their male counterparts are. The white head and tail generally does not develop until the birds are five-years old. © photo Joni Roberts

The bird bestowed with the honor of being our national symbol has an intriguing life history and ecology. Here are some fascinating facts about our fine-feathered friends, the bald eagles:

The scientific name of the bald eagle is Haliaeetus leucocephalus. The Greek roots of the genus Haliaeetus translate to, “sea eagle” while in Latin leucocephalus literally means, “white head.” Common names in other regions of the U.S. include sea eagle, fish eagle, and erne. A subspecies known as the white-tailed eagle is found in Eurasia and lacks white head feathers. Most of the 60 species of eagles worldwide inhabit Eurasia and Africa.

BIRDS OF MANY COLORS

Bald eagles have one of the most varied plumage evolutions of any bird in North America. The characteristic pure-white head and tail don’t develop fully until the bird is in its fifth year of life. Prior to that, eagles undergo a succession of dark brown, mottled plumage variations with white highlights becoming more discernable the older the bird gets. Eagles in their second and third year of life still have a primarily dark head, beak, and eyes while fourth-year birds possess a white head with brown streaks. Adults display distinctive bright yellow feet, legs, and beaks, pale yellow eyes, and black bodies. There’s a method to Mother Nature’s madness as the dark mottled feather patterns of young eagles serves as excellent camouflage while the white head and tail announce that the bird is of breeding age.

Bald eagles are the second largest birds in North America (California condors carry that crown). While the sexes exhibit no color dimorphism female eagles are usually about 25% larger than their male counterparts are. The lovely ladies can weigh up to 15 pounds and have a wingspan eclipsing 7 ½ feet! Males can tip the scales at 10 pounds and possess wing diameters of 6 feet. Adult body lengths range from 28 to 40 inches. With the flavor of a formal assembly, a group of eagles is called a convocation.

The average lifespan of an eagle in the wild is 20 years. The oldest documented bald eagle was an old-timer that passed on to that heavenly aviary in the sky at the advanced age of 38!

ALL HAIL THE QUEENS

A fascinating study from California indicated that larger female eagles, whether adult or subadult, were 100 percent successful at supplanting the smaller males from dead prey items.

In the Mitten State, and throughout much of the U.S., eagle numbers plummeted in the 1950s. This was largely due to the widespread use of the devastating pesticides DDT and PCBs. The chemicals invaded food webs and caused deadly neurological disorders in the birds as well as eggs to be very brittle or not hatch at all. The fantastic news is that Michigan eagle numbers have ballooned from an alarmingly low 52 breeding pairs in 1961 to over 850 couples today! Two events – the banning of the use of DDT in 1972 and the passage of Endangered Species legislation in 1974 – played key roles in this resurgence.

A PLEA ABOUT POISON

Speaking of insidious chemicals entering ecological systems I urge everyone to find alternative methods of rodent control than the use of rat poisons. Eagles, as well as other birds of prey like owls and hawks, may consume the mice and, in turn, die because of the poison they’ve ingested. It tugs at one’s heartstrings to think that a majestic bird that has possibly survived up to 20 Michigan winters would perish from such a senseless human practice.

MANSIONS IN THE SKY

Bald eagle nests, known as eyries, are the largest of any North American bird. Better yet, their nests are the largest tree nests ever recorded for any animal species on our planet. The nests can be up to 13 feet tall, 8 feet wide, and weigh 4,000 pounds! With those construction specifications, it’s no wonder that eagles mate for life and usually return to the same nest year after year!

To protect the eaglets from tumbling out bald eagle nests are 2 to 3 feet deep. That is critical because their eyries can be up to 200 feet in the air and the young can’t survive a fall from those altitudes.

Adult bald eagle couples produce 1 to 3 eggs each spring with two eggs per clutch being most common. The eggs, which are twice the size of those of a chicken, require 35 days of incubation before hatching into the parent-dependent altricial eaglets. Upon hatching, both the male and female adults care for and feed the young. Fledging occurs at approximately 10 – 12 weeks, but the eaglets remain with their parents for up to a month.

A word to the wise, never disturb an eagle nest. If this happens, eagles often abandon the eyries and leave the chicks to starve to death. In Michigan, the mortality rate is over 50 percent for eagles in their first year of life. Sadly, overall survival from hatching to adulthood is believed to be between 15-25 percent.

The in-flight courtship displays of bald eagles are simply spectacular. They feature swoops, chases, and cartwheels in which they fly high, lock talons, and free-fall, only separating just before hitting the ground. It is no surprise that this maniacal mating ritual is called a “death spiral!”

Despite movie and commercial depictions that often use the shrill screech of a red-tailed hawk to represent eagle vocalizations the actual call of these white-capped avian consists of weak staccato, chirping whistles of “kleek kik ik ik ik,” similar in cadence to a gull’s call.

Bald eagles – and their feathers – are highly revered by Michigan’s native peoples. The birds play a key role in Native culture, religion, and mythology. Eagles represent honesty, majesty, strength, courage, wisdom, power and freedom to the Native Americans of Michigan and other states. If you are looking for a great children’s book to read to your little ones I highly recommend the award-winning picture book, The Story of Jumping Mouse. It is based on a Native American legend about a mouse whose generosity is rewarded with becoming an eagle.

With eagle numbers on the rise, you are sure to encounter one soon in the woods and waters of the Wolverine State!