Michigan Meanders…Don’t even think
about badgering a badger

Although badgers live throughout the state, few Michiganders have ever seen a live one. Maybe they are lucky. Badgers know no fear and when provoked will attack an enemy several times their size. This includes you.

A member of the Mustelidae or weasel family—minks, skunks, martens, otters and wolverines are cousins—the badger is an especially vicious critter. Powerful jaws, big incisors and two-inch claws can create mayhem and do it in a hurry. It doesn’t take much to tick the fascinating badger off.

The good news is that this low-slung, bar-faced animal is shy and secretive. Even so, he can turn up in people’s gardens and in garages, hen houses and under porches. 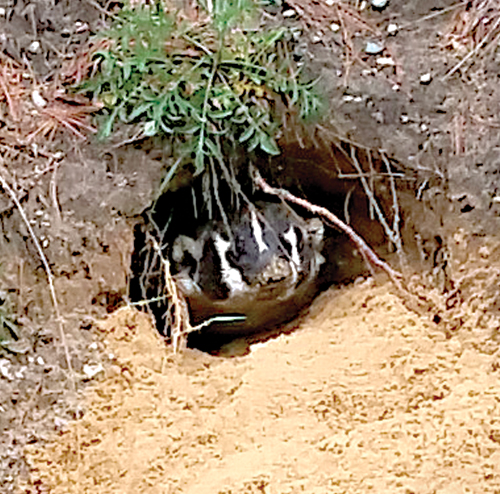 A badger can dig himself out of sight in seconds. They prefer light, sandy soils and range usually a couple miles. A single badger may use as many as 50 dens, rarely occupying the same one on successive nights. After digging this fresh den this badger was photographed by Caitlin Smith in Fairview.

A friend of mine once caught a badger in a fox trap, but the badger wouldn’t let him get close enough for release. Popping its jaws and hissing through gleaming fangs, the badger held his ground. My friend, ever mindful of danger, tossed a washtub over the animal and told his teenage son to stand on it while he quickly removed the trap.

At the count of three, both ran off while the badger rearranged the washtub. You may wonder why they didn’t kill him and sell the pelt. Well, at the time in the 1970s, badgers were protected in Michigan. Currently the DNR allows each licensed resident trapper to take one badger per year during the fur harvest season (October 15 to November 14 in the northern Lower Peninsula and in most of the U. P., November 1 to March 1 downstate—see the DNR digest for more details).

Today, a properly skinned and cured badger pelt is worth very little. Kanokla Fur Company in Hunnewell, Kansas, for example, forecast a value of only $12 last fall. A taxidermist in the market for a prime unskinned specimen would probably pay more if he couldn’t find a dead one along a Michigan road.

I have never seen a live badger in the wild but became interested in them through, of all places, a college course in Neoclassic literature. John Clare, the 18th century English poet, wrote a poem recounting the badger’s fighting prowess. Badger baiting, a take-off from bear baiting and dog fighting, was jolly sport in England and Europe at that time. Ground rules involved putting a badger into an overturned barrel and then releasing gutsy dogs to rout the critter out.

Sometimes the dogs actually won and made money for their owners.

The German word for badger is dachs, and the scrappy dachshund was bred to rout badgers from their dens. These were larger dogs than today’s miniature models. Then again, European badgers are larger than those that live throughout North America. The noun badger, of course, can also be a verb, meaning to pester or annoy. Dating from Old English, it has been in use for centuries.

Badgers are often mistaken for raccoons or woodchucks because they are roughly the same size. A really big badger will weigh 20 pounds, but the average adult is 12 to 16 pounds. Its coat is a salt-and-pepper, gray-yellow, and it sports a flat, triangular-shaped head, the color of which is reddish-brown to black. A white stripe runs from the base of the nose between the eyes and across the skull to the shoulders. Cheek patches of white give it a further barred appearance.

On their short, stubby legs badgers seem to waddle as they walk but are capable of running 10- to 12-miles per hour. They prey on gophers, ground squirrels, mice and sometimes cottontails. They will also eat insects, worms, snails, snakes, bird eggs and carrion when they can’t find fresh meat. In light, sandy soils, which they prefer, a badger can dig himself out of sight in seconds. Range is usually a couple miles across, and a single badger may use as many as 50 dens, rarely occupying the same one on successive nights.

A badger den will be elliptical, that is, wider (12 to 15 inches) than it is high (six to eight inches). Old fields, pastures, open brush lands slowly growing back to timber, and open woodlot areas are likely places to find dens. The animals breed in late summer. After a gestation period of six to nine months (delayed implantation occurs in January or February), two to five young are born. After four weeks the young open their eyes, and within another month they will eat solid foods. Soon after, they begin to hunt on their own.

According to Rollin H. Baker, author of Michigan Mammals, it is likely that badgers—along with the 13-lined ground squirrel (a principal food source)—lived in prairie openings of southwestern Michigan before the settlers arrived. As the forests fell, the animals spread throughout the Lower Peninsula. Badgers arrived in the Upper Peninsula through Wisconsin, probably sometime in the early 20th century.

Amazing creatures, the badger might have been a better choice than its cousin, the wolverine (extinct in Michigan) for our state animal. There are plenty of badgers in Michigan, and they appear to be increasing. If you encounter one, back off. And never badger a badger.n