As the dark cedars gave way to the rising sun, the beauty of the clear water trout stream unveiled itself. Robins were announcing daybreak and in the distance I could hear a gobbler greeting dawn as I slipped along the bank, moved silently on needles from cedar and pine and creeped into casting position. The only question looming in my mind, “Is the big brown here?”

Precise casting was my go to technique and my live bait presentation touched the stream surface with little noise. Waiting for the belly to come out of line I could feel the offering bounce along the gravel strewn bottom, it instantly stopped and line drew tight to the solid jolt of a strike. I instantly set the hook and my rod doubled to the fierce fight of a big stream brown. At first I could feel violent head shakes, then the monster turned downriver using the current to try to pull out the hook and he charged under a fallen tree as line ripped off the reel. I had little control but fortunately the beautifully speckled trout refined his fight to bulldog tactics deep in the hole. This is exactly what I’m talking about…fish on! One can’t help but feel like giving a war whoop holler when you see one of these beauties twist, jump, zip out line, flop and dart amongst the clear flows of spring. Soon he tired; I reeled slack line and eventually put the five-pound beauty onto a nearby sand bar.

I love German brown trout. They strike hard, grow to be enormous and are the most photographic fish you will ever wrap your hands around. My relatives cherished stream browns and I was brought up as a kid fishing them in central Michigan streams like the Cedar near Gladwin, Tobacco near Clare, Hershey near Hershey and Pere Marquette near Baldwin. But the love goes far past scenic waterways and simply fishing. I was taught to cherish the flesh, keep it cool, firm, never mushy and fry in a cast iron pan over open flames until the skin is crispy and the tail and fins crunch between your teeth like extra well done french fries. There is something powerfully addictive about the rich flavor of fresh stream trout. I’ve roamed many Michigan trout streams with cast iron skillet, real butter and flour in my backpack along with matches to start a fire to fry trout over an open flame and enjoy life, big time.

There are a number of fishing tactics that will catch trout. Some folks prefer to cast spinners; others drift bobbers or cast flies and many bounce bottom with bait rigs. The choice is yours but one thing is certain; you can increase your catch if you practice stealth techniques. Point is you have to stalk ’em, treat them with respect and move into casting position slow as molasses in winter. My daddy taught me how to stalk trout before I was in my teens and the method is still deadly today. Begin by wearing clothing that hides your human outline. Forget white t-shirts and bright/bold colors certain to spook fish. Always wear a ball cap to keep light out of your eyes and shade your white face from the sharp vision of wary trout. When approaching a trout honey hole slow your pace, ease into casting position, stay in the shadows, and hug trees and shrubs to conceal your human outline. 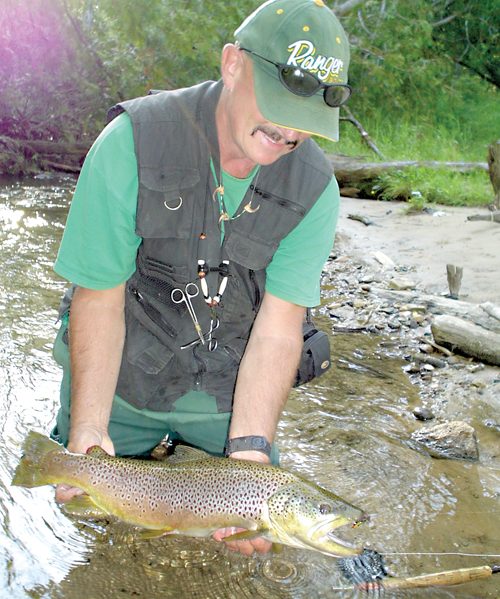 Michigan is blessed with 36,000 miles of trout streams and angling destinations that capture the imagination of thousands of anglers.

I was brought up catching trout in cedar swamp creeks and small streams with deep undercut banks and log jams that held wary wild trout. In most cases there is no need to get in the water, make waves, and allow fish to see you, spook and ruin any chances at having fun catching trout. The trick is to walk upstream, slow down, ease into casting position and stay out of sight from the sharp vision of wild fish. Keep in mind trout spot fast movement with ease and if you stomp along the bank like a mall shopper in a hurry to hit bargains or step along the bank with the power of a military parade, trout will feel the vibration and disappear. Those who slow their pace, sneak into position like a fox ready to pounce on a mouse will have more bites and catch more fish.

Ready to cast? Here comes the important part, try to avoid presentation splash down. I’m talking about spooking fish with heavy spinners, lead weight or a bobber that makes a loud plunk that trout can easily detect. Precise casting is the key to stream trout fishing success and you have to get your presentation in the face of waiting trout. But if you splash the stream surface your chances scramble for cover. Savvy anglers are experts at underhand or flippin’ techniques that place presentations precisely and avoid excessive noise and snagging overhanging tree limbs and brush. Once target fish have been disturbed it is wise to move upriver to a new location and maybe return after spooked fish settle and resume feeding.

Polarized sunglasses are a must for stream fishing so you can see fish, locate snags, underwater brush and eliminate the bright glare of sunlight off the water. Polaroids help you to become the ultimate stealth machine, identify fish holding cover like rocks, logs, stumps, undercut banks and deep holes or runs. Once you locate a likely hide out using your sunglasses that’s when you slip into position and make precise casts. Decades of being a trout junkie have taught me some Polaroid glasses are better than others. I’ve settled on the new Tac Hi Viz wraparound version that filter out UV, are polarized and have HD high definition. Make certain the glasses you use fit snuggly and use a model with side shield, bubble or wraparound to eliminate light coming in the sides.

I learned as a kid that if I shoveled in chicken manure I could find ideal trout bait, earth worms. I’m not talking golf course night crawlers that you have to pinch in half and kill in order to get them on a hook. No sir, I’m talking about the hottest bait going for stream trout and if you lightly pin them through the collar using a Mustad sz #8 181 bait holder hook you can thread them on the barb and they will drift in the current, wiggle, slip along bottom like a live crawler and fish love ’em. You can tell if your presentation is correct because in most cases you will get hammered on the first cast. Feisty wild trout see the wiggling worm, charge the bait, get a quick smell and slam the offering with reckless abandon. Bang! It’s over and the worm is gone, violently ripped off the hook by the savage strike. Be prepared to rebait because hungry trout that did not feel the sting of the hook are almost always eager to strike, sometimes you will go through several worms before you finally get the hook into the hungry fish.

In recent years wax worms have become reliable bait for those seeking steelhead. But the jig–it’s not just for steelhead. I’ll never forget a stream outing with Babe Winkelman while filming a steelhead segment when Babe put on a 1/16 oz. white jig with black marabou, tipped it with a worm and danced it along bottom in a deep run. He instantly hooked a dandy brown trout, then another. By day’s end he caught a half dozen beautiful trout from the lower Muskegon River. Since then I learned that jigs work like dynamite for stream trout and the hottest technique going is to dangle them below a float. To sweeten the pie and guarantee results place a single salmon egg, small spawn bag, bit of cut skein, worm, ½ crawler or wax worm on the hook. The idea is to suspend the wavering jig over obstacles and draw wary trout to come up and grab the tasty treat. Set the distance from bobber to hook at about three-feet unless water is shallower or deeper. Stand along the center of the hole, cast to the top and retrieve slack line as the float drifts down, next feed line to keep the float vertical and continue floating until it drifts the full length of the hole.

I often have winter dreams about summer streams where I grew up in Grayling along the banks of the AuSable River. There was the ever present smell of Hartwick pines and endless trout sanctuaries along the winding river near Sand Hill Lake. That’s where I learned how to catch grasshoppers and catch beautiful brook trout by the dozen. I’d always run out of fresh bait and quickly learned the technique of fly fishing. Man it was fun to see the take, feel the strike and fool wary stream trout with flies that imitated insects, nymphs and terrestrial critters. By the time I was 12 years old I could cast a country mile, catch trout on royal coachman, nymphs and dry flies but my favorite was grass hopper imitations. One night I could hear big browns slurping the surface and soon learned how to fish after dark during the hex hatch for monster browns. Timing and precise casting are important but success skyrockets when mayflies fill the air in massive swarms and big browns go bonkers.

When I was in high school I joined Charter Captain Jack Duffy and we chased a huge brown trout that would slip under the DNR fish hatchery fence in Grayling and feed in the kid’s section of the trout stream. I hooked the behemoth once on a hellgrammite, fished off 12 pound leader and the monster brown ripped line off my fly reel like a foul hooked Chinook and snapped the line like a thread. The big brown had a massive lower kype that was pure white and we nicknamed the monster trout “Booger Nose.” Years later a kid from Grayling caught Booger Nose and his picture was in the Grayling paper holding a 17-pound stream brown trout, an absolute monster.

The experience was burned into my memory and I became a brown trout fishing bum and chased them all over Michigan. There is one important lesson to learn about big river browns; streams and rivers do not give up their secrets without a challenge, seldom do you simply get lucky and elements seldom favor the fisherman. Fish of a lifetime must be earned; you have to refine productive fishing strategies, cover a lot of water and locate the secret hiding places of river inhabitants. Then with a stealthy approach and respect for the species you ply your trade, cast to likely hide outs and maybe get the tug of a lifetime on the end of your line.