This spring is shaping up to be a… WALLEYE ANGLERS DREAM

Late March and early April bring a ton of expectations for serious walleye anglers in Michigan. While our state continues to provide some of the best walleye angling in the nation, there are some inland areas that are shut down to allow inland populations to spawn. We will discuss the areas of our state that are open and accessible for a fish of a lifetime.

Michigan experienced one of the warmest Februarys on record this year and anglers had boats on Saginaw Bay, the Detroit River and Lake Erie in both January and February. When weather allowed many of these anglers slammed some nice fish. The fish are there and expected to spawn earlier than usual. Some water temps on southern Lake Erie were in the 40-degree range in January. Since water temps are the biggest factors in spawning, we could see the spawn go in mid-March this year barring a long period of frigid air. Anglers need to be ready early.

Lake Erie still presents the best bet for a 10-plus pound fish. There are not as many giants that go 13-14 pounds on Erie as many fish in the 2003 spawn have finally been thinned out. There are, of course, a few of those fish around but outings with three, 11-pound walleyes in a day are doubtful these days. The interesting thing about Lake Erie’s walleye population is there have been a whole lot of five to six pounders filling in the void. Really 2015 had a better spawn than 2003 so fishing should stay hot for many years to come. Erie provides both trollers and jig anglers world-class fishing. Many females will spawn on underwater reefs and it is important to focus attention there. 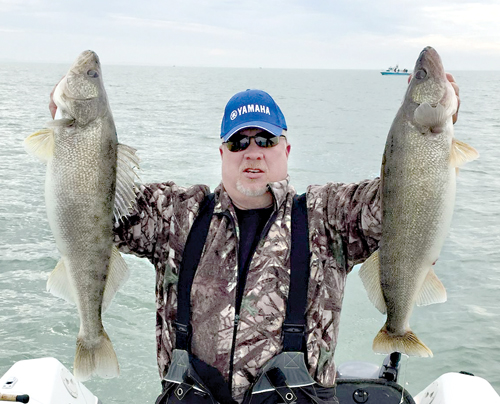 The author with a pair of trophy walleye…big waters mean big fish and anglers need to be ready early. Mark Sak photo

Trollers will troll off the edges with big stickbaits or even bottom bouncers and in-line weights in front of crawler harnesses, especially when the water starts to warm quickly. Jiggers can sit on top of the reef and jig plastics or rip blade baits for the feisty smaller males that crowd the reefs during the spawn. There are always fish migrating to and from spawning grounds in April and that’s what makes Lake Erie world class in March and April.

The Detroit River is really part of the Erie phenomenon. Literally millions of walleyes swim up into the Detroit River to spawn on the gravel and rubble that lay along the shorelines and many walleyes drop down from Lake St. Clair. We learned many years ago to start jigging shallow and work deeper as the day transpires and boat traffic pushes fish deeper.

There are many great spots that hold fish along the river. Areas that have been blown out by a motor of a docked barge hold fish. The channel breaks are a highway for walleyes. Also look for those important warm water discharges as they are a fish magnet. Go big with the jig. A 3/4 to 1 oz. jig works the best on most days. This river is not a jig finesse bite river. The drift down is very fast and most of these fish are not looking to eat. This is a reaction bite. The key is keeping the jig and line vertical. Subtle jigging and slow drops keep the jig in the strike zone and anglers will have that jig in front of an angry eye that is ready to strike at anything during the spawn.

Saginaw Bay has been hot already in 2020. The biggest walleyes of the year enter the inner bay during winter and early spring and will spawn in the Saginaw River system or on reefs in the bay. Many even spawn in the smaller rivers like the Kawkawlin. All the rivers dumping into Saginaw Bay close on March 15, so anglers need to concentrate on the open waters of Saginaw Bay after that date. Saginaw Bay has experienced an interesting change in the last 20 years. Bait fish populations have changed drastically, and the bay can only support the larger walleyes for a short time in the spring while the smelt and other high protein bait fish can spawn in the cooler water. Once these waters warm up, the bigger walleyes must head to Lake Huron outside of the inner bay to hunt for bait that will keep them healthy.

Although the bigger stick baits will still take plenty of fish on the bay, anglers are striking gold with smaller profile crankbaits. Frenzy minnows and shads are now the go-to baits. Early in the spring start closer to the river mouths. The dumping grounds have been a great place to start trolling and we now will have a new man-made reef, Coreyon Reef, to try out.

This spring is shaping up to be a walleye anglers dream. Make sure the boat is tuned up and all the safety gear is in working order as none of us will last long in 35-degree water. Take someone new to the sport out with you this year and I’ll see you on the water.