I’m usually fortunate enough to draw a spring turkey license for the first season in the area that I turkey hunt, however this doesn’t guarantee that I will be toting a gobbler over my shoulder on opening day. Oftentimes it can take several days of hard work, persistence, and patience to bring a longbeard into shooting range. The same holds true for later on in the season. The only difference is you will have a longer season to fill your turkey tag.

This spring the DNR is once again offering Hunt 234, which runs May 1 – May 31 and includes all open areas of the state except for the public lands in the southern Lower Peninsula. Hunt 234 provides you with a solid month to harvest a gobbler, which allows you more time in the turkey woods if necessary to get the job done. This additional time coupled with the vulnerability of gobblers is welcomed considering how tough these birds can be. Therefore, your chances are just as good at filling your tag during the last remaining days of the season as they are during the first week based on the fact that most hens are sitting on their nest causing gobblers to be more susceptible to your calls. With that being said here are some tips for taking those late season gobblers that can drive us crazy at times.

By the time the late turkey season arrives all of the trees will have leafed out and the surrounding foliage will be alive with the color green. This extra cover provides you with more concealment either when running and gunning or blind calling, which is sitting and calling from one location for an extended period of time. However, don’t become careless with your movement. Walk quietly when walking through the woods to avoid being detected and use the surrounding cover and topography to your advantage when setting up on a gobbler.

This time of year, wear a camouflage pattern that consists of mostly green and blends well with your hunting area. There are a variety of camouflage clothes available to choose from that will help conceal you from the sharp eyes of a gobbler. I recently purchased a Mossy Oak Obsession patterned shirt, pants, and hat that is perfect for the property that I hunt. 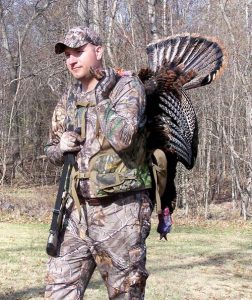 This spring the DNR is once again offering Hunt 234, which runs May 1 – May 31 and includes all open areas of the state except for the public lands in the southern Lower Peninsula.

Although gobblers aren’t as vocal as they were earlier in the season, using turkey calls is still an important tool that you can use to help lure one in. By this time of year most longbeards have become educated and have heard a variety of different calls depending on how heavily pressured the area is that you’re hunting. In order to spark their curiosity you should have an arsenal of calls available at your disposal to throw at them.

Pull out an old call that you haven’t used in a while. Due to its simplicity, I like using the push pull call. This allows me to continue calling while having my gun in the ready position. This call is excellent for purring, which can imitate a bird that is content or fighting depending on the sequence. Later in the season, gobblers become more competitive and will oftentimes fight frequently due to the few remaining hens which haven’t been bred.

Some turkey hunters use wingbone calls during the late season. This call offers a fresh sound and is sure to get a gobbler fired up. Wingbone calls are made from the wing of a turkey. With some time invested you can make one yourself or buy one already handmade.

Each year new calls are created by outdoor companies that specialize in turkey calls. If you’re like me you can’t help but buy one of these new calls in hopes that it will bring in a big old tom to your set up. Make a trip to a local sporting goods store and add one of these calls to your turkey vest that you have never tried before in the turkey woods. Who knows, it could be the magical one.

Whether you use a box, push-pull, diaphragm, slate or glass call it’s extremely important to call softly, especially during the late season when the turkey woods has been pressured by hunters. Calling too much is not as big of an issue as calling too loud.

Hunting food sources during the late season can also increase your chances of filling your tag. After fly down, hens abandon strutting gobblers and head to their nest for the day. At that time gobblers begin focusing their attention on feeding instead of the hens.

During the late season, gobblers will feed mostly on waste corn left behind in agricultural fields, insects, seeds and newly sprouted leaves and grasses. I recall one morning where I had noticed several longbeards traveling across the alfalfa field I was hunting to a neighboring cornfield to feed. Later that day around mid-afternoon I decided to close the distance to this cornfield and set up on the opposite side of where I was positioned. Shortly after creating a few soft purrs on my slate call a gobbler appeared and practically tripped over himself as he quickly came to within shooting range offering me a shot.

If you’re unsure of where turkeys have been spending their time feeding in your hunting area then do some scouting and set up near areas where you find concentrations of tracks, droppings and turkey feathers. Gobblers are likely to return to these areas, offering you a shot.

Decoys have always been an essential component of my turkey hunting gear. They act as a constant visual to gobblers especially when hunting in open areas such as fields and meadows. Even without calling, decoys are effective. I’ve had many occasions while hunting on the edge of a field when gobblers have silently approached my decoy setup after a long period of not calling. Oftentimes decoys alone can bring in a gobbler from a long distance away into shooting range.

My decoy setup typically consists of a hen in a feeding position and an upright hen. I also will occasionally add a jake or tom decoy to challenge a nearby gobbler. I like positioning these decoys about ten to fifteen yards out from my setup depending on if I’m using a shotgun or bow. When using a jake or tom decoy, place them between you and the hens facing towards you. This will often cause the gobbler to come in and square off with the decoy offering you a shot.

Hunting turkeys during the late season can be challenging at times. However, by following these tactics your chances of filling your tag will hopefully increase.