May is known as “morel month” in Michigan, and includes appearance of both

the true morels and the so-called “false morels” or lorchels…

Michigan is one of the nation’s largest producers of these highly sought wild delicacies. The season can begin, depending on precipitation and variety, two weeks earlier in mid-April and extend two weeks longer, into June.

Morels and lorchels are what are called “mycorrhizal” fungi (“myco” refers to “fungus” and “rhizal” to root). These are among the many fungi that send their underground threads, or mycelia, through the ground to connect with the roots of green plants, where the organisms share nutrients.

It is estimated that 90 percent of terrestrial green plants depend on fungi for nutrients derived from decaying matter, while the fungi depend on green plants’ ability to produce nutrients using chlorophyll and the sun.

True Morels
One of two general groups of mushrooms that appear in the spring in Michigan are the true morels, comprising a number of species including the white 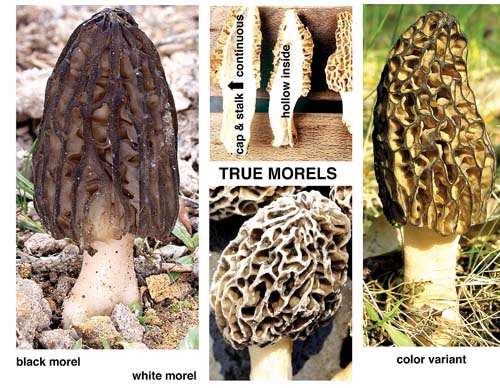 morel (Morchella esculenta), the black morel (Morchella angusticeps) and the less common and later occurring Morchella deliciosa. These three species share identical defining characteristics, differing mainly in color and when and where they are found. Identifying the trees that mushrooms associate with goes a long way to locating the fungi themselves.

The key characteristics of all of the true morels are:

1) They grow on the ground (not on wood);
2) They are roughly cone-shaped, like a little pine tree, with a distinctive pattern of ridges and pits and a smooth, light-colored stalk;
3) They are hollow inside from top to bottom;
4) The edge of the cap runs directly into the stem; there is no break or overhang.

With obvious pits and ridges, a completely hollow interior top to bottom and a continuous stalk and head, whether they are gray, cream, tan, brown or black, true morels ought to be easy to identify. On the other hand, during a workshop in which students were told to bring back the mushrooms that they’d found, one person brought back a shriveled black animal turd. So I guess it’s not that easy.

They begin to appear along with the first wildflowers; or more quaintly, when oak leaves are the size of a squirrel’s ears; or when asparagus begins to poke up in the garden. Black morels are associated with middle-aged aspen, though they can be almost anywhere, from a wood mulch near your foundation to a grove of giant white pines. White morels are famously associated with old and often abandoned apple orchards or solitary trees along with dying elm and ash, which are sadly disappearing anyway.

The best way to find true morels is to accompany someone who knows a spot, and good luck finding such a person who will share their knowledge. The mushrooms are extremely well camouflaged, the darker ones looking a bit like pine cones among the dead leaves.

Though in general the lorchels, or false morels, contain varying traces of a cumulative poison in the form of a compound that can cause liver and kidney damage in humans and even very rarely death, tests for those toxins in Gyromitra korfii have been negative and G. korfii is considered the only false morel safe to eat. (MSU Cooperative Extension Bulletin E-614; Mushrooms Demystified, pp. 800-801 under the alternate name Gyromitra gigas.) Like most wild mushrooms, it should never be eaten raw.

It should be crystal clear from the illustration (lower-left) that the bull nose does not resemble either true morels or other false morels. It is a squat, chunky mushroom with the head and stalk about the same diameter, ranging in size from a golf ball to a soft ball. Split down the middle, the entire mushroom and stem are filled with what almost look like noodles. The bottom edge of the cap is not attached to the stem. Cap color tends more to tan and gold than to dark, rusty brown. Take care not to mistake Gyromitra esculenta (beefsteak morel) for the bull nose. The differences are obvious, but pay attention.

The bull nose appears as soon as the snow begins to melt; it is commonly collected on the opening day of trout season in the Upper Peninsula near the edges of puddles or melting snowbanks in mixed conifer and hardwood stands. I have found it near the Yellow Dog River in Marquette County and along the road in the Pictured Rocks National Lakeshore. It is reportedly common in the Rifle River Recreation Area in the Lower Peninsula.

This is a large, distinctive mushroom that looks absolutely nothing like a true morel in shape, color or texture, and begins fruiting earlier in the season than the true morels, but may continue through May. They grow with conifers in central and northern Michigan; under or near aspen, and often where bracken ferns are found. The cap is often large and dark brown with convoluted folds resembling those of a brain, while the stem, which may have a vertical groove, is creamy white or tan. These are so much easier to see than true morels that they are extremely tempting and hundreds of people eat them every year with no ill effects. They are even sold in farmers’ markets in Europe.

Not a single reputable mushroom book or expert will recommend eating G. esculenta because it contains the potentially fatal toxin, gyromitrin or hydrazine. I’ve had professors who claimed to have eaten them, while in the next breath warning me strictly not to try them myself. The record on actual deaths from consuming this mushroom is very ambiguous. References range from none in the U.S. and two in Europe to none in Europe and seven in the U.S. over many decades. Considering the hundreds and hundreds of people who have eaten this mushroom all their lives, the odds of fatal poisoning seem to be low. Symptoms appear 2-24 hours after ingestion, and can include headaches, nausea, abdominal pain, diarrhea and vomiting. In severe cases the liver and kidneys are damaged possibly leading to death. But really, is it worthwhile to play Russian-roulette with a mushroom?

People claim that parboiling the mushrooms prior to frying eliminates the toxin, and it does, though not completely. The cook should keep the kitchen windows open, stand away from the vapors coming off in the steam and discard the boiling water. Neither Wood-N-Water News nor the author of this article recommends eating the “beefsteak morel.”

We hope that this information will help you explore the world of Michigan’s spring fungi. A solid guide is A Morel Hunter’s Companion by Nancy Smith Weber.