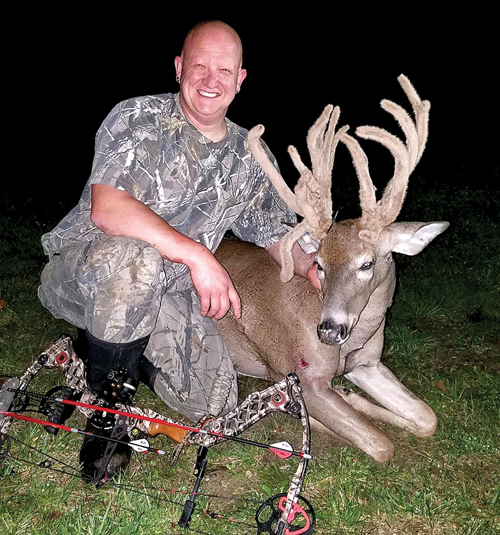 Joe Runci’s buck’s velvet antlers had 22 points and score 186 3/8 even though the rack only has a typical 4-point frame.

Joe Runci from Linden bagged one of the most unique trophy bucks taken in Michigan during 2019 in Genesee County, and he did it with bow and arrow. The rack only had a 4-point typical frame, but it was the 18 nontypical points that contributed most of the score, and the antlers were still in velvet. The whitetail’s underdeveloped testicles contributed to the weird rack and the fact that it was still in velvet.

Runci said the buck’s testicles were as small as marbles. A normal whitetail buck has testicles close to the size of small chicken eggs. Since testicles produce testosterone that controls velvet and antler shedding, the buck Joe shot probably had velvet-covered antlers year-round that continued to grow.

The deer Runci shot is an example of a cactus buck. Cactus bucks typically lack testicles or have them, but they are underdeveloped. Injury to testicles can also produce cactus bucks.

Joe’s cactus buck has an official nontypical score of 186 3/8, according to Commemorative Bucks of Michigan scorer John Ohmer. The typical 4-point frame, including an inside spread of 12 3/8 inches, contributed 88 7/8 inches to the score, and the length of the nontypical points totaled 97 4/8 inches.

Joe arrowed the unusual buck on the evening of October 8, 2019. He said he got a trail camera photo of the buck with a funky rack during 2018 after dark, but the deer was about 20 yards from the camera, too far for him to see much detail. All he could see from the image is the whitetail had a strange set of antlers.

In 2018, Runci had good trail camera photos of a 10-pointer that he guessed would score in the 150s. That’s the buck he was targeting at the time, so he didn’t give the deer with the funky rack much thought. As it turned out, Joe never did get a shot at the 10-pointer. He arrowed a 3-year-old 9-pointer on October 21 that year and filled his second tag during December with a decent 8-pointer that had a broken tine.

The buck with the funky rack got Joe’s attention during 2019 when he got better photos of it. Those photos were taken at 1:00 and 4:00 a.m., however. Then on October 8, Joe pulled a card from the camera that had previous images of the velvet-antlered buck on his way home from work.

“I’m an assistant coach on my son’s football team,” Runci said, “and I barely have time to grab something to eat after I get home from work to make it to football practice. On that day, I set the card up from my camera on the counter so I could look at the photos. There was a photo of the velvet buck from 7:00 p.m. the day before.

“I looked at what time it was and did some calculations in my head to try to figure out if I had time to hunt, and I decided to go for it. I called the head football coach and told him I wouldn’t be able to make it to practice.”

As soon as Joe could, he was hunting his elevated box blind, where the buck had been photographed the day before. He said the blind overlooked a funnel consisting of a swale that deer routinely use on their way to feed in a nearby field.

“I’m not normally able to pattern bucks where I hunt,” Runci explained. “When I set up on a trail a buck used one day, they usually use a different trail the next day and end up too far for a shot, if I see them at all. But I was hoping that buck would use the same trail two days in a row during legal shooting time.

“I expected to see the buck coming in front of me, but he was not using the same trail as the other deer. He showed up a few minutes after 7:00. I caught movement out of my peripheral vision to my left, and it was him. I turned to look, and he was facing me. I thought he was looking at me, but he was just looking in my direction.

“I was able to grab my bow, and when he turned to look away, I drew my bow. He eventually took a step to the left, opening up his chest. He was only 13 yards away, so I was confident of making the shot and took it.”

Joe made a perfect heart shot, but because the buck was angling toward him when he took the shot, his arrow didn’t pass through the deer. Consequently, there was a poor blood trail. Joe called some friends to help him look for the whitetail, and they found the buck without too much difficulty.

Runci shot the buck with a Mathews Z7 Bow and carbon arrows tipped with a 100-grain, 3-blade NAP Spitfire mechanical broadhead. The deer was thought to be 3 or 4 years old and had an estimated dressed weight of 200 pounds.

Joe said he started bowhunting whitetails when he was 18 years old, and he’s been at it for 22 years. He said he mainly hunts deer with bow and arrow now.