Arriving at the old abandoned railroad grade, which was accessed by a gravel road that separated my family’s hunting grounds from the neighbor’s land, I slowly pulled off the road onto the shoulder where I parked my truck. It was late October, and the fall colors welcomed me; with my bow in hand, I began the mile journey to a treestand situated in a poplar tree. After doing some pre-season scouting, I had placed this stand about twenty-yards south of the railroad grade in an area where several deer trails crisscrossed, and a large white oak tree was located. This was an excellent year for mast crops, and many of the acorns on the tree had already fallen to the ground.

Slipping through some small saplings and underbrush, I finally arrived at my stand, and within minutes I was nestled in place with my safety harness on and my bow resting on my lap. From this height, the colors were even more outstanding than seen from the ground level. With my arrow nocked and broadhead sharpened, I remained motionless, waiting for deer to arrive. As I sat patiently, I couldn’t help but feel a connection with the Indians of the past that once occupied these vast hunting grounds in Mecosta County in search of game hundreds of years earlier. It was hard for me to imagine that the land beneath my feet that I had traveled across had revealed artifacts found by my grandpa several years earlier. 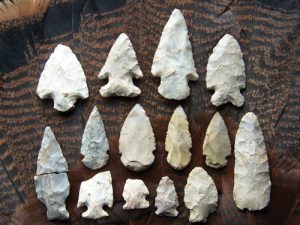 Throughout the many years the author’s grandfather farmed he discovered numerous Native American arrowheads on the soil where he plowed his fields.

Years back, my grandfather used horse-drawn farm implements from around 1947 when his family first arrived at the property until about 1950 when he purchased a tractor to do the many tasks that a working farm requires. It was when he plowed the fields in preparation for crops that he would notice projectile points (arrowheads) laying on the surface of the freshly tilled soil. Altogether my grandfather found twelve arrowheads and one stone knife between the years 1947 and the mid-1980s. The only other person that I know who found an arrowhead on the property was my dad, who discovered one while going for a walk through one of the fields sometime in the 1980s.

These prehistoric projectiles are believed to be the work of the Chippewa Indians, also known as the Ojibwa Indians, in the Woodland periods. Archeologists have divided this particular span of prehistoric activity in Michigan into three distinct periods. Although archaeology is a continually changing science and some of the names for periods are regularly changing, the Woodland periods have been given the following periods; Early (600 B.C.-200 BC), Middle (200 BC-AD 700), and Late Woodland period (AD 700-1700). The Paleo-Indian (12,000 BC-8000 BC) and Archaic Period (8000 BC-600 BC) precede the Woodland periods. Arrowheads that were found dating from the Late Woodland Period appear to be smaller than earlier ones. This is believed to have been the result of the beginning use of bows and arrows by Native Americans.

In my collection, which was given to me by my grandfather, the majority of the arrowheads are the smaller type, which consists of point styles called Lake Forest Middle Woodland – found in Northern Michigan and Small-Notched – found in the Great Lakes area. This would indicate that most were attached to wooden arrows by sinew (dried animal tendons) and used for hunting quarry with a bow. The remaining points in my collection consist of medium-sized points that were probably made sometime in the Middle Woodland Period. I also have one stone knife in my collection that could have been used for many different purposes.

The Chippewa Indians were nomadic hunters for the most part whose small bands covered areas of up to 1,200 square miles. It appears as though the Chippewa may have set up a small village on the property, which could have been seasonal, hunting what animals were needed before heading elsewhere. The larger populations of Native Americans settled more permanently along the lakeshores of the Great Lakes and also near the mouths of rivers. However, even though these areas were popular locations to settle, they would occasionally occupy small villages in woodlands that were abundant with game. It is not for sure exactly how often the Chippewa Indians traveled through this particular area. Judging by the number of arrowheads found in the fields by my grandfather over the years, they could have occupied this area regularly.

There are probably many arrowheads that still exist throughout different parts of Michigan. However, there are strict laws that govern the ownership of any artifacts found on public land. Collecting in these areas without permission could result in severe penalties. The best and most convenient places to find these projectiles are in fields freshly plowed by farmers. Permission should be given first by the property owners before walking around their fields in search of arrowheads. Legally, any arrowheads and other prehistoric artifacts that are found while searching belong to the owner. Chances are, most owners will allow the collector to keep any artifacts that are encountered when permission is granted beforehand.

David Bridgens, Curator for the Department of History, Arts, and Libraries, suggested, “To keep track of where you’ve made discoveries, it’s good to keep a plot or map of the area that you’ve already investigated.”

He also mentions that you can plot ten-foot by ten-foot sections so that you know exactly which areas you have covered in previous years. After thoroughly searching this section, you can continue with another at your own pace. Besides searching fields for arrowheads, try checking sandy soils where dry weather and wind have uncovered projectiles.

Another area that might be worth your time examining is along the banks of creek beds. The water runoff may expose arrowheads to the naked eye. Having friends or family members along with you in the field creates a sense of camaraderie and increases your chances of finding arrowheads with those extra pairs of eyes.

A great way to add to your understanding of arrowheads and other artifacts is by joining the Michigan Archaeological society (www.miarch.org). These chapters usually have regular meetings that you could attend and share your findings. This will allow you to acquire knowledge from professionals and peers who share this same interest. Also, most counties in the State of Michigan have a historical society that might provide you with some other useful information.

Collecting ancient projectile points is an excellent way to become connected with the hunting methods from Native Americans of the past. If you are an avid bowhunter, then this is an excellent opportunity to help fill the void in the off-season. I think that it is fascinating how yesterday’s arrowheads of flint have transformed into modern-day razor-sharp broadheads made of stainless steel. Either way, both points are capable of taking a mature whitetail deer among other quarries.

Occasionally I open up the old cedar box that contains my entire collection of arrowheads and reach in and hold these ancient projectiles and examine the craft. As I do so, my mind drifts off to the past as I picture the hands of Native Americans hundreds of years earlier, flaking off pieces of stone, creating arrowheads for hunting.