Just as May is considered “morel month in Michigan,” June should be called “oyster mushroom month.” But in contrast to the often invisible morels, in a good year pounds and pounds of delicious and safe oyster mushrooms festoon standing and downed aspens during June.

Oyster mushrooms are easily seen from a car traveling at expressway speeds all along I-75 north of the “tension zone.” The tension zone is a line running from about Muskegon to Bay City dividing the lower peninsula into northern “Laurentian Mixed Forest” (a mixture of conifers and hardwoods—pines, spruces, firs, maple, aspen, and paper birch. This type of forest extends into the U.P. and north and east into Canada), and southern “Eastern Broadleaf Forest” (beech-maple and oak-hickory) types. This north/south division runs across Michigan into Wisconsin and Ontario. 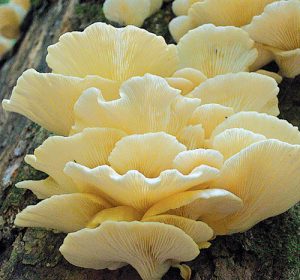 Growing on dead aspen, oyster mushrooms are creamy color, have gills underneath and a short stalk (if they have a stalk at all) that is always on one edge of the mushroom. Typical form is a semi-circle attached at one side to the tree trunk.

The tension zone, in part determined by the length of the growing season and temperature and therefore creeping slowly north as the climate warms, also marks a change in soil type from a richer clay/loam in the south to coarser, sandier and more acidic soils in the north. The edge between the two lies on a glacial moraine, where at the end of the last Ice Age, receding glaciers dropped off soil and debris that they had been carrying.

Aspen forests, often mixed with birch, cover about 3 million acres of Michigan’s land surface, mostly in the northern Lower Peninsula, and the U.P. Northern Michigan produces some of the finest quality aspen in North America. Aspen stands in Michigan are made up of two species, “quaking aspen” (Populus tremuloides) and “big-tooth aspen” (Populus grandidentata), both of which we called when I was growing up, “poplar” or “popple.”

Aspens are relatively short-lived trees, with “quaking” reaching half a century and “big-tooth” maybe a decade or two longer. They are completely shade-intolerant, which means that they are a temporary forest type that pioneers areas cleared by natural disasters like blowdowns and fires, and clear-cuts created by forest managers. Saplings will not even grow beneath more mature aspen trees, so they don’t replace themselves—as they die off, they are naturally replaced by other, shade-tolerant species that had been growing in the understory.

Aspen wood is useful to humans in making paper pulp and chips for oriented-strand board (a kind of plywood), but particularly of value to wildlife. As much as 30 percent of deer summer browse consists of green aspen leaves, while twigs are relished during the winter months. Other game like ruffed grouse, woodcock, snowshoe hare and cottontail rabbit are drawn to aspen. Beavers use them for both construction and food. Many non-game birds like warblers, indigo bunting, least flycatcher, ruby-throated hummingbird, red-eyed vireo, and pileated woodpecker are attracted to aspen-birch forests.

Individual aspens are either male or female, every three or four years producing a virtual blizzard of seeds, but perhaps their primary method of reproduction is through suckers or clones sprouting from the roots. In Utah, a forest of 47,000 of these sprouts, all parts of the same parent and all genetically identical, make up the world’s largest living organism weighing an estimated 13 million pounds: an entire forest of one tree!

Though I can’t recommend hunting for mushrooms at seventy-five miles an hour on I-75, I gather as much as half a bushel of gourmet-quality mushrooms on each trip up north during June.

Oyster mushrooms, Pleurotus ostreatus, are saprophytes: they derive their nourishment from wounded, dead, or dying trees. For this reason, they are less dependent on the weather because they extract moisture from the wood on which they are growing.

It takes a practiced eye to see the mushrooms at high speed while paying attention to traffic, but their white to beige shelf-like growth
on trees stands out clearly. Their other identifying characteristics are easy to master, too, so the novice collector can’t make any fatal mistakes.

Though Pleurotus ostreatus can grow on other hardwoods, in this area, they are mostly found on dead or dying aspen (poplar), whether standing, stumps, or logs on the ground. You can identify aspen by its smooth, pale yellow-green or gray-green bark and heart-shaped leaves that flutter in the wind, exposing a lighter, silvery underside. (Don’t mistake a birch for a poplar; though birches host many shelf-like fungi, most have pores rather than gills, and all are inedible.)

Along with their presence on dead aspen and their creamy color, oyster mushrooms have gills underneath and a short stalk (if they have a stalk at all) that is always on one edge of the mushroom. The typical form is a semi-circle attached at one side to the tree trunk. Oyster mushrooms often grow in tight clusters of a dozen or more, but they also occur singly. You may see them fruiting
up the trunk of a standing tree,
with the nicest ones just out of reach. In that case, just as our tool-using cousins the chimpanzees use twigs to pull termites from their nests, the human food gatherer needs only to find a long stick to knock them down.

Oyster mushrooms are almost always infested with small black beetles with reddish-brown heads—their presence among a mushrooms’ gills is another indication that you’ve found the delectable oyster. These insects are easily removed by holding the mushroom with the gills down and tapping on it, though the more persistent bugs can be dislodged with a knife. As time goes on, oyster mushrooms get wormy, but since the worms enter through the stem, one need only cut away the stem—which is often tough anyway—and any other parts of the mushroom with visible tunnels. Since some of the fruiting bodies (as scientists call the mushroom part of a fungus) may be a foot across, leaving a few inches to the worms isn’t a bad bargain.

In addition to the identifiers mentioned above, Michigan’s fresh oysters smell lightly of anise or licorice. This doesn’t affect their taste at all but is just one more sign that the mushrooms you are collecting are indeed Pleurotus ostreatus.

When harvesting, I carry a sturdy basket and a pocket knife, and clean my collection in the field, cutting away bits of bark and any insect-infested parts. I clean them well before I put them into the basket since it is hard to dislodge debris from between the gills if you let it drop into them. Mushrooms should not be washed, as they absorb water, making them difficult to sauté. If they have a bit of dirt on the cap, just brush it off. (And never store or carry any mushrooms in plastic—they will deteriorate rapidly.)

So what’s the big deal?

Zingerman’s, a famous gourmet deli and produce supplier in Ann Arbor, sells cultivated oyster mushrooms for $10 a pound. Wild ones go for about $15. So I collected between $100 and $150 of wild mushrooms on one trip north along I-75! Not that I would sell them. I enjoy sharing my wild finds with my friends and eating them myself. They are also suitable for drying in a food dehydrator. Oyster mushrooms are one of the few wild fungi that can be eaten raw in salads, and are delicious in omelets, on pizza, in stir-fry, and with chicken or steak. They are great in creamy alfredo sauces, and they are large and meaty enough to grill.

Don’t let another June go by without harvesting these very easy, safe, and delicious products of nature.