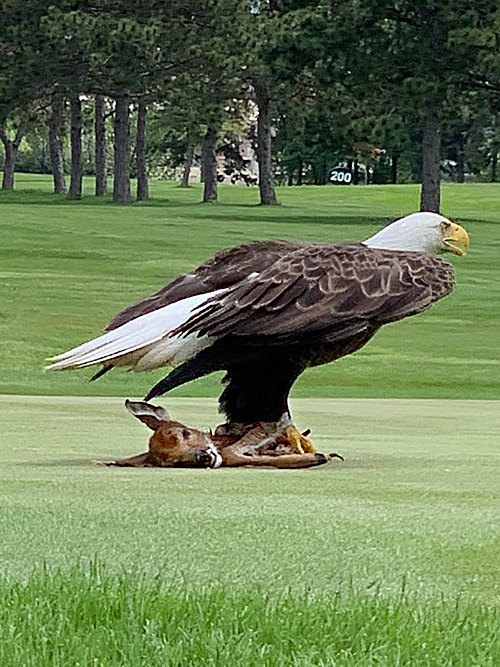 The predation of a whitetail fawn by a mature bald eagle was confirmed at the Riverside Golf Club in Menominee on June 3 by several witnesses, some of who had cameras to capture the action. One of those witnesses was the club general manager Lisa Froehlich.

“We see eagles on the golf course quite often, actually,” she said. “There’s an island in the Menominee River called Blueberry that’s near the course. Eagles have a nest on that island. We have a deer herd on the property, and I’m sure eagles prey on fawns when they get the chance, but this is the first time I know of, anyone has seen it happen.

“I was in the clubhouse when our golf pro said, ‘Come here. You’ve got to see this,’” Froehlich commented. “I went to take a look and saw an eagle with a fawn. The fawn was quite heavy, and the eagle was struggling to carry it. The eagle landed on the clubhouse to take a break.”

Based on accounts of people who saw the event, the eagle carried the fawn to the nest on Blueberry Island in stages. Club member Fred Reidell photographed the eagle with the fawn in its talons on the green for hole number 4.

“I was on the driving range between noon and 1:00 p.m. when I saw the eagle land on the green with the fawn,” Reidell explained. “I drove over there with my golf cart. I took a lot of pictures, but I kept getting closer. The eagle was so out of breath; it couldn’t go anywhere. The eagle was on the green for 10 to 15 minutes.

“I didn’t see the eagle kill the fawn. I think the eagle ate some of the fawn before landing on the green, where I photographed it. A lot of people who have seen the photo I took think it’s fake, but it’s not. I can verify that.”

The eagle carried the fawn from the green to the clubhouse. From the clubhouse, the eagle made it to a tree along the river with its catch. Reidell said the eagle then landed on a house on the Wisconsin side of the river. From there, the eagle was able to carry its prey to the nest.

“You could see the eagle was laboring to carry the fawn,” Lisa added. “It was actually panting.”

Although no one had seen an eagle take a fawn on the golf course before June 3, according to Froelich, she said a club member (Duane Clausen) who is a photographer captured an image on camera of a bald eagle coming in for the kill on a fawn in a different location. Eagles probably prey on fawns more often than most people realize. Soon after birth, fawns are vulnerable to all types of predators, and fawns would be readily visible to birds of prey such as eagles.

During a three year fawn survival study conducted in Menominee County by Mississippi State University in cooperation with the DNR about 10 years ago, one of the fawns that were part of the study ended up in a bald eagle’s nest. During the study, pregnant does that were live-trapped during the winter were fitted with vaginal implant transmitters (VITs) that were activated when does gave birth. Researchers homed in on the signal from VITs to catch and collar as many fawns as possible. Newborn fawns that were encountered while in the field were also collared.

Radio collars put on fawns have a mortality mode that’s activated when there was no movement after 24 hours. Mississippi State University doctoral candidate Jared Duquette was homing in on the signal from the collar of a dead fawn to try to determine what killed it when he came to the base of a huge hemlock tree containing a bald eagle nest.

“After a half-hour of searching on the ground without finding anything, an eagle took off from the nest,” Jared said. “I put the antenna up in the air toward the nest and almost blew my eardrums out. The fawn’s collar was definitely in the eagle’s nest.”

Although bald eagles are capable of killing fawns, they are also scavengers, so Duquette is unsure if the eagle killed the fawn in that case or picked it up as roadkill.n