Bass on the shady side

Pulling largemouth from underneath piers…

In Sometime in the late 1970s or early 1980s, when bass tournaments gained a firm foothold north of the Mason-Dixon line, northern anglers discovered that bass—sometimes big bass—lurked under piers during the summer. Guys fishing boat docks started taking top prizes in many contests.
The first fellow to educate yours truly about bass under piers was a fellow named Danny, who was the stepfather of a young lady I worked with in the marketing department of Starcraft in Goshen, Indiana, in the mid-’80s. Danny was an avid competitor in tournaments throughout northern Indiana and southern Michigan.

Danny took me fishing one day in his bass boat and surprised me with his gear for getting at bass lurking in the shade. It was a push-button Zebco reel on a 5 1/2-foot rod with the old trigger handle. His bait of choice was a three-hook, pre-rigged plastic worm. Now, this was when effective marketing and the growth of bass fishing stars such as Rick Clunn and Roland Martin had convinced the bass fishing masses of proper, manly equipment. For the most part, “true” bass anglers only used level-wind baitcasting outfits. Spinning reels were “girls’ reels,” and a push-button, closed face spincast reel was for kids. A pre-rigged worm was something city folks bought at gas stations. In fact, they were often called “tourist worms.”

All that thinking was just fine with Danny. He would stand way up near the tip of the bow, wind up like he was drawing back a golf club, then whip the rod in a semicircle that ripped through the air, releasing the button on his reel with such perfect timing that the tourist worm would skip from the front of the pier way up, almost to the shore. He could cover the entire length of shade under a dock. He caught lots of bass with his technique and often cashed checks in tournaments.

A few years later, I got to know Greg Mangus, a dominator of local tournaments who also did well in regional affairs. Mangus took me fishing a few times, and on one particular occasion, instructed me about fishing docks. While bass could be found under almost any dock, the best ones almost always had wooden supports. Wood apparently was better for forming a sort of “pier ecosystem,” creating a better environment for micro-organisms to thrive, which in turn attracted bigger bugs, minnows, and young panfish. These critters provided an ongoing smorgasbord for bass.

I remember one trip, on Diamond Lake near Cassopolis, when Greg paused and pointed down the line of docks we were going to fish.

“What do you notice about these docks, and which do you think might be the best one?” he asked me.

I admitted that I didn’t have a clue as I looked at the seemingly endless progression of docks running down the shoreline.

“You see how several docks down they start to come out farther from shore and make a sort of point?” he asked. “That point is every bit as attractive to bass as an underwater point can be.”
Sure enough, Greg pulled several bass from the docks that formed the point.

Greg used a spinning reel, monofilament line, and a fairly long rod to skip. Like Danny, he had a practiced technique that got jigs and tubes way back up where he wanted them to go. One of his favorite lures was a jig he designed and poured, called a Mango Jig. He used a 1/4-ouncer. You can still find these conical, rubber-skirt jigs in retail stores and online. Nichols Lures now makes them and their website (nicholslures.com) heralds Greg as a “legendary northeastern bass pro.” For a skipping trailer, Greg impaled a small Uncle Josh pork chunk, which wouldn’t come off while pounded across the water’s surface. Pork chunks are no longer readily available, but Nichols has a system of pegging soft-plastic trailers in place with a toothpick.

When first starting out skipping, it’s probably best to use spinning tackle and lures such as tourist worms, soft plastic stickbaits (Senkos), or a tube with the lead jighead hidden inside. Start using standard rubber-skirt jigs after you’ve gained some skipping expertise.

Why? Because one of the best places to find bass in the shade is under a pontoon boat. Pontoons moored facing shore offer a very small gap between the aluminum tube and the outboard motor. Hit a pontoon with uncovered lead, and you’re Chuck Barris eliminating a bad singer on the “Gong Show.” The sound you create can bring angry cottage owners running down to the shore hollering.

With a soft plastic, that sound is considerably muffled. 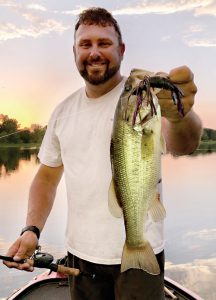 Buck Mallory shows the results of effectively skipping a 1/2-ounce jig with baitcast gear and 20-pound test line way up underneath piers and pontoons. Author photo

A spike of machismo still exists in the bass world that still says spinning reels are for sissies.
But that isn’t the only reason a lot of successful dock skippers use levelwinds. Baitcast gear lets you use heavier line and successfully throw heavier jigs. Heavier jigs can outfish other lures such as tubes and Senkos because they garner reaction strikes. While a Senko or other soft plastic stickbait wafts down enticingly, it lets a bass have a good look at it. On a lake that gets a lot of fishing pressure, bass become wary of things that don’t look a lot like a baitfish, and might not commit.

A 1/2-ounce jig with a hard-kicking trailer, on the other hand, skips under a dock, stops, and plummets. It comes past a bass in a flash, its trailer moving lots of water, and a bass simply reacts and gulps. At least much of the time.

Baitcast reels also allow heavier line, which can be important for pulling a bass out of the cross supports and cables, sometimes encrusted with zebra mussels. A favorite line is Seaguar AbrazX fluorocarbon in 20-pound test. This stuff can hold up to a bass that is halfway wrapped around a pier’s support pole.

I thought I would never be able to skip with a baitcaster, but decided to give it a try. I asked my friend Buck Mallory, a hardcore tournament angler from Lawton, Michigan, to give me some pointers, so one hazy afternoon, he took me fishing on a pier-filled lake in his Nitro bass boat.

“For one thing, don’t try and cast too hard,” Buck said as we started. He smoothly let fly with a half-ounce Strike King Structure jig adorned with a Missile D-Bomb trailer.

Standing on the back deck, I eased the rod back and swung it forward underhanded, letting go of the spool with my thumb just as the rod tip started back up from the lowest part of the swing. My jig, identical to Buck’s, skipped beautifully, surprising both of us. It turned out that was beginner’s luck, and a few casts later, I was picking out a backlash. But for the rest of the afternoon, following the advice to not swing too hard and let the weight of the jig do all the work, I was skipping the jig well, with only an occasional backlash.

Skipping is a great skill to learn, and as fun as it is effective. Get good at it, and you can catch bass with the technique from summer well into fall.