Afavorite quote came from a self-help guru at a two-day-long seminar that was supposed to help all of us attendees better cope with relationships, workload, and life in general.

Here it is: “Understanding is the booby prize of life. What matters is results.”

Strangely enough, three decades after taking that seminar, the skies opened, and I realized I had the perfect piece of evidence to help that quote make sense.

It applies perfectly applies to a curious, 4-inch piece of flat, bumpy, soft plastic called a centipede. I don’t think anyone understands why this thing can catch so many bass. What matters is that it catches them. Sometimes it catches bass better than any other piece of soft plastic you can throw at them.

The Centipede, made by Zoom, has its roots in “French fry” style soft plastics, so-called because they resemble a crinkle cut fry. Back in days of yore, the French fry baits were most popular dragged on a 3- or 4-foot leader behind a heavy weight as the business end of a Carolina rig.

Zoom’s Centipede is one of the last crinkle-cut fry baits left and is certainly the easiest to find at well-stocked tackle shops. Berkley used to make a Power Bait version, and several other companies did, too. A careful search online will reveal some smaller manufacturers still cranking them out. 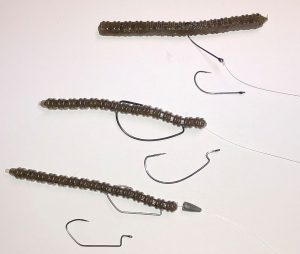 Ways to rig the versatile centipede include (from top): wacky-rigged with a No. 1 VMC Neko hook, Tex-sposed and weightless with an extra-wide-gap hook and Texas rigged on a 1/0 Matzuo Sickle Offset Worm Hook with a 1/8-ounce sinker.

One of the cool things about being an older bass angler is seeing how certain lures fall out of popular use but then make a resurgence. That’s certainly the case with the Centipede.

When the Carolina rig fell out of fashion, so did the centipede. Necessity is the mother of invention, but in an angler’s world, it’s more accurate to say running out of one kind of lure can lead to trying another that’s similar. Sometimes, the replacement proves to be more effective than the original.

Such was the case for young Cooper Nutting of Grand Rapids. A bass angler talented enough to earn a bass fishing scholarship to Auburn University in Alabama, Cooper had run out of a favorite Bass Pro Shops worm he liked for wacky rigging, so he tried a Zoom Centipede instead. The result was so good that a wacky-rigged centipede is now a go-to weapon in Nutting’s arsenal.

“I think it’s the rate it falls is what makes it so effective in shallow water,” says Nutting, who came back home in March when COVID-19 shortened his freshman year. He puts a light-wire hook through the middle of the worm so that slight twitches can make both ends wiggle. Except he doesn’t usually twitch it, preferring to let it sink slowly to the bottom.

“I want it to soak awhile,” he says. “I might give it some real light twitches, but mostly I just want it to sink slowly.” The No. 1 size Neko hook from VMC that Cooper employs is lightweight and doesn’t speed the fall.

I watched Cooper catch several fish right at the end of a kayak bass tournament last summer, (enough to beat me) and couldn’t see what he was using, so afterward, I asked him. He was forthcoming about his wacky-rigged centipede, noting it has saved more than one fishing session for him.

I don’t know what fish find so attractive about a bumpy piece of soft plastic, but it must have some intrinsic appeal. After editing a story about how effective a centipede was as a finesse presentation when Texas-rigged, I gave it a try. Initial results were so good that a centipede on a 1/0-size Matzuo hook with a sliding, 1/8-ounce bullet sinker in front of it is almost always tied on one of my rods whenever I go bass fishing.

It’s an easy lure to use, and catches fish of all sizes—it’s a great one to tie on for someone new to bass fishing, too. In rivers, I like to throw it upstream and reel up slack while the current pushes the lure back to me. Since the hook point is stuck in the plastic, it doesn’t often snag. In lakes, it’s a good lure for easing through weed beds, too. This year I started replacing standard 4-inch finesse worms on split-shot rigs with centipedes and bass seem to love the presentation.

In a kayak tournament on Muskegon Lake, I needed two more fish with just a half-hour to go and caught both on a split-shot centipede rig, tossing it across a wind-blown point. It was enough for a third-place finish. A couple days later, in a Tuesday night tournament, I caught all four of my submittable fish on a bait from the same package—the centipedes were plain old green pumpkin in color. The split-shot setup caught the big bass of the tournament, and I finished third among 20 competitors with just the four fish. Sure, I’m sort of bragging, but also illustrating that this lure can catch them when others don’t. The split-shot rig (I peg a 1/8-ounce bullet sinker about 18 inches in front of the lure) is another one that’s good when you’re taking kids or other inexperienced anglers fishing. They just need to cast it out and drag it back.

One final way to rig a centipede. Many years ago, Michigander Mark Zona, who currently stars in “Zona’s Awesome Fishing Show,” told me about how a flat-sinking, weightless centipede provokes bites from neutral bass. Back then, Zona was fresh out of high school, working on becoming a professional bass angler. He was always a good source of information for magazine stories I sold to Bassin’ Magazine back in the 1990s.

Zona had learned that a slow-falling centipede could provoke strikes when other lures didn’t, but instead of wacky-rigging it, he rigged it Tex-sposed on a 5/0 extra-wide-gap hook and fished it without additional weight. Tex-sposed means Texas-rigged, but with the hook point out of the plastic and ready to engage a fish’s mouth.

About a month after he told me about the presentation, I got to try it up on Wisconsin’s storied Chequamegon Bay on Lake Superior. I was there with a couple of other anglers in June, before the bass had started spawning, and it was obvious why the bay was known for giant smallmouth bass. They were everywhere. The fish were in the clear shallows just cruising around, ignoring most of the lures we thew at them. The centipede came to the rescue—the fish didn’t resist the slow-sinking soft plastic, and we caught lots of them, including some trophy-sized specimens.

So if you want to try a simple lure for bass, try a centipede. It’s one of those old school lures that still catches ’em.