A FAWN IS BORN

After more than 20 years of walking with whitetails of both sexes, I came the closest I’ve ever been to film the birth of a fawn on May 26. I came across an adult doe that’s 8- or 9-years-old that I’ve been walking with since she was a fawn that had just given birth to a fawn minutes earlier. I was lucky to spot the doe lying in a stand of hardwood trees with her newborn as I walked by about 20 yards away. 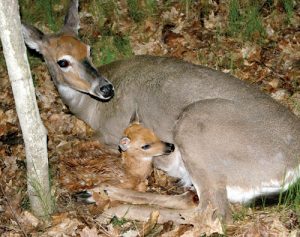 The fawn next to its mother not long after it was born.

Most does would have bolted before I got anywhere near that close, but since this particular doe knew I didn’t pose a threat, she wasn’t concerned and remained where she was. The fawn was still wet and wasn’t yet strong enough to stand. The doe licked the fawn all over to clean it. Because of my relationship with the doe, I was able to film the interaction between the two from a matter of feet away.

Even though I missed the birth of that fawn by a matter of minutes, I knew that this doe normally has twins, so I was excited about the prospects of witnessing and filming the birth of the fawn’s twin. In the meantime, I filmed the newborn consuming what may have been its first meal as it nursed while the doe was lying in a position that exposed her udder to the fawn. The fawn nursed several times between being thoroughly licked by its mother.

I also witnessed the fawn eventually taking its first steps. It made many unsuccessful attempts to stand on wobbly legs before finally being able to stand on all four feet. Even when the fawn did finally stand and walk, its legs were still unsteady. Watching that fawn’s poor mobility soon after birth was a sign of how vulnerable newborns are to predators of all types.

If a coyote, wolf, bobcat, or bear had come along when I did, they would have had an easy meal, unless the doe had been aggressive enough to chase the predator away. Even after fawns are a week or two old, they are still easy prey for most predators. Their muscles are not yet strong enough for them to outrun predators. During those critical first two weeks of life, fawns primarily rely on hiding to avoid predators.

Does that have twin fawns typically hide each fawn in a different location for at least two weeks to reduce the chances of a predator killing both fawns. If a predator happens upon a doe soon after she gives birth to twins, however, when they are still together, both fawns are usually lost. I’ve happened upon twin fawns that were still together on several occasions when the doe left in response to my presence.

Predators must certainly encounter the same thing on occasion. Former UP resident and bear researcher Terry DeBruyn was walking with a habituated adult female black bear and her cubs in Alger County one time when they happened upon twin newborn fawns, and the bears killed both of them. DeBruyn documented the incident on video.

After twin fawns are about a month old and are then fast enough to escape most predators, they begin spending most of the time together.
Getting back to the newborn fawn I filmed with its mother soon after birth on May 26, after it was able to stand and walk, at one point the fawn approached me and walked around me before returning to its mother. Apparently, it was curious about what I was. I did not attempt to touch the fawn.

The following afternoon, I was able to film and photograph the same doe and fawn. Another doe made that possible. When I located the doe that had given birth the day before, she was by herself. I hung out with her, hoping she would lead me to her fawn. At one point, a second doe appeared about 75 yards away. That doe happened to walk by the fawn born to the doe I was with, and the fawn started following the unrelated doe, thinking it was its mother.

The doe I was with didn’t waste any time running to her confused fawn to stop it from following the second doe any farther. Whitetail does have distinct fawning territories where they try to isolate their fawns from other deer, so their fawns imprint on them. I’ve seen other situations during, which a fawn started following a doe that wasn’t its mother, so it’s obvious that keeping other deer away from their fawns is important in having their offspring learn to identify their mothers.

Soon after the doe connected with her fawn, she allowed it to nurse, and it did so while standing. Both the fawn and its mother were lying down when I filmed it nursing the day before. Although the fawn was now able to walk, it was still a little unsteady on its feet, but its leg muscles were strengthening. The fawn was hiding about 100 yards from where it was born.

While I was sitting on a log about 10 feet from the doe and day-old fawn, the fawn walked up to me, sniffed my pant leg, and then went back to its mother. What a special moment that was. I treasure such moments that few if any, other people are privileged to be able to experience. Since its mother accepted me, the fawn did as well. Like the day before, I did not attempt to touch the fawn.

The doe eventually walked off, and the fawn followed. I was right behind them. I got a chance to see how challenging it can be for a day-old fawn to follow its mother through the woods. At one point, the doe stepped over a fallen tree that would have been too high for the fawn to make it over. Fortunately, the tree was suspended above the ground, and the fawn was able to squeeze underneath it.

When they came to a fallen tree that was on the ground and as tall as the fawn’s back, the fawn followed the tree trunk until coming to a low spot and tried unsuccessfully to climb over it there. The fawn then went back to where its mom stepped over the fallen tree. Realizing again that the tree was too high to try to get over the obstacle there, it returned to the low spot again. The fawn’s second attempt to get over the fallen tree was successful.

After following the mom about 100 yards, the fawn was tired. It walked up to another fallen tree and laid down to rest. I left the pair at that point. I hope to spend more time with the doe and fawn in the future.