As a serious bowhunter, procrastination makes me cringe. The thought of putting things off, especially when it comes to bowhunting, it doesn’t sit well with my desire to put some meat in the freezer. This action can prevent us from tackling tasks that should have been done when birds were building their nests, and the trees were beginning to bud. Although the window of opportunity is narrowing by the second before Michigan’s archery season begins, there is still hope. Rather than spend an excessive amount of time worrying about the things that you should have done to prepare for bow season, start planning, and take action now. After all, you still stand a good chance at wrapping your tag around the antlers of a mature whitetail this fall. What follows are some tips that will help you complete those tasks with as little impact on the deer as possible so you can go afield with bow in hand and no regrets.

There is a huge difference between scouting deer in January just after archery season ends and scouting deer one month before the opener. If you bump a mature buck in January, chances are he will forget about it once the season arrives and return to the area. On the other hand, if you bump one just before the season, you will be hard-pressed to see him during daylight hours for the rest of the season. However, by using a low impact approach, you can reduce any negative impacts by implementing “speed scouting.” This form of scouting is exactly what it implies- checking out likely areas that hold deer in a very short time. These areas could include isolated apple or oak trees, food plots, clear-edges, or farm fields. The best times to do this are either during midday when deer are bedded down or during inclement weather such as high winds or rain. These conditions are ideal because they will help mask your noise and dissipate any human odors left behind. Wearing scent-free clothes and spraying down with a scent eliminating product is still essential despite these conditions. 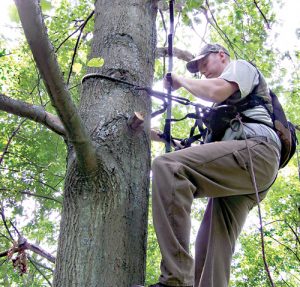 Choosing the right time to hang a stand-such as before or during rain showers and windy conditions will lower the risk of pressuring deer.

Although using a pair of binoculars from afar won’t tell you how many trails and rubs are in your hunting area, it is a great way to keep inventory on what type of deer are frequenting a particular area you’re interested in hunting. Another way to speed scout besides putting your boots on the ground is by driving a four-wheeler or side-by-side through the area. Deer are familiar with this type of noise, especially in farming communities. It will also help reduce the amount of time you walk through an area leaving scent behind.

During speed scouting, you’re simply gathering as much intel as possible so that you can decide as to whether or not you want to hunt in that particular area. In Michigan, bucks typically will shed their velvet in early September. If you find fresh rubs in an area, this could be a winner come opening day.

Last year, while scouting on public land in northern Michigan, I had discovered what I thought was a decent area for hanging a treestand. A quick recon while speed scouting confirmed this when I found several fresh rubs and oak trees, which had started to drop acorns. Because I was confident that this area would produce, I decided to set up a treestand on the same trip.

If at all possible, try to set up your treestands on the same day as you speed scout. The inclement weather conditions described above will prevent your hunting area from becoming more contaminated and reduce the chances of pushing a mature buck out of the area. Plus, a second trip into the potential hunting area means that more human scent is left behind. Because of the short time frame until the opener, keeping a low profile is mandatory to minimize your intrusion on the whitetail’s turf.

When speed scouting an area, I bring along gear and equipment, which will allow me to hang a treestand during the same trip afield. These items include a hang-on stand and climbing sticks, a safety harness, lineman’s belt, haul line, quick connect strap, bow/pole saw, bow/equipment hooks, scent eliminating spray, and ratchet straps.

Once you find an area where you would like to hang a stand, remove as little branches as possible for both your shooting lanes and your treestand to prevent deer from noticing any sudden changes to their environment and provides more cover while on stand, any branches that are cut should be hauled away from the area to avoid alerting a mature buck. No matter how hard you try to remain scent-free, handling these branches will likely leave traces of human scent, which can put up a red flag to deer entering your hunting area.

Waiting until the last minute to start shooting your bow before the archery season opens is never a good idea, but if flinging arrows got put on the back burner along with scouting and preparing your stands, there is still hope. In just a few practice sessions, you should have no problem bringing your shooting muscles to life again and placing arrows in a tight group.

During the first practice session, whether you shoot off your deck in the backyard or at a 3-D archery range, start out shooting a close target, 10 to 15 yards. At this point, you should focus on form and muscle building instead of how far you can shoot. After several sessions and you begin to build your strength and accuracy, it is time to place the target out to the distance you plan on shooting a deer. I feel most confident in my shooting ability up to 30-yards, so this is the maximum distance that I will place my target. When I practice off of my deck, I never place the target in the same position or the same distance. We can’t predict where a mature buck will be standing once he presents us with a shot opportunity; therefore, it is important to switch things up to keep us prepared for multiple situations.

Once the season begins, I like to take at least one shot before I head to the woods. These brief practice sessions will keep your shooting skills sharp and your muscles in condition throughout the archery season.