My friend Larry is an eclectic guy. He has a wide range of interests. He and his band (including his wife) perform locally and specialize in classical rock and country music. He is a writer and produces an annual deer hunting newsletter detailing the adventures and success of his family’s whitetail season. Most of his hobbies and activities revolve around being outdoors in Michigan with his family.

Larry and his oldest daughter enjoy whitetail and turkey hunting together. Larry supports his son’s love of outdoor sports, including football and soccer. But, he and his middle child (daughter Emily) share a truly unique outdoor activity. They trap turtles. That’s right, a teenage girl that likes to trap snapping turtles with her father. I believe that qualifies as unique.

Five years ago, Larry and Emily watched a Michigan Outdoors show highlighting turtle trapping. Emily thought it would be an adventure she would enjoy. Since that day, it has been a father and daughter’s past time, bringing them closer.

Larry is the type of person who does his research when approaching a new challenge. He went on the DNR website and learned about licensing, the legal season, the size limits, and the possession laws. He researched various commercial traps and what traps are legal in our State. 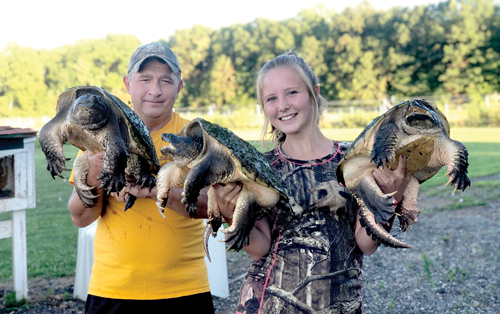 Father/Daughter Snapping turtle trapping team: Larry Rothman and daughter Emily with some of the turtles they have trapped.

In Michigan, the season for trapping the Eastern Snapping Turtle (Chelydra Serpentina) and the Spiny Soft-Shell (Apalone spinifera) is July 15-September 15. This is perfect timing for the turtles and most outdoor enthusiasts. The turtle’s nest in May and June and need those months to keep their species thriving. As outdoorsmen mid-July to mid-September can get a little slow. Participation in turtle season will take you from prime fishing season to the opener of squirrel season. Then the youth hunt and the whitetail archery season are right around the corner.

You can trap or catch turtles for personal use with an all-species fishing license in Michigan. Possession laws can be a little confusing. You can possess no more than four snapping turtles and no more than two of either species.

The size limit for keeping a snapper is 13 inches or larger, measuring from where the head comes out of the shell (carapace) to where the tail descends. This may not seem very large. However, a turtle with a 13-inch plus shell will weigh 15 plus pounds and is probably 20 or more years old. Larry estimates that 20 percent or less of the turtles he traps makes the legal size. Most of the snappers that visit his trap are in the 10 to 11-inch range.

Turtle traps vary in size and shape, but they all are based on the same method of entrapment. They are baited steel cages with a door through which the turtle can enter, but cannot exit. In Michigan, a turtle trap must either float or be placed such that a trapped turtle can get his or her head out of the water. This is not only ethical but also the law.

Once the season begins, Larry and Emily set their traps (they use both floating and stationary traps) in local ponds and shallow streams. Snapping turtles will eat any meat. They will even eat other turtles. This makes the type of bait used for trapping simple. Any meat will work; hamburger, cut up fish, canned tuna, cold cuts. Once a trap is set and baited, they check it daily. Most trips result in the trap being visited by small snappers or other smaller species, including the wood turtle, eastern box turtle, common map turtle, musk turtle, Blanding’s turtle, and the painted turtle. The painted turtle is Michigan’s most common and is the official state reptile.

Just like the fisherman looking for that slot size walleye or the northern pike over 24 inches, Larry and Emily check their traps looking for the legal-size snapper. In the course of a season, they will harvest six or seven large snappers. Larry is a true sportsman and only takes what he and his family will eat.

The largest turtle the trappers have taken was a 20-inch monster weighing in at over 40 pounds.

Like with all hunting, trapping, and fishing, once the fun is over, the work begins. You now must remove a very unhappy reptile with a parrot type beak, serpentine neck, sharp claws, and bad attitude from a wire cage. Many people believe holding and moving a turtle is best done by holding it by the tail. This is not true. Since most of the turtles are not of legal size, they must be removed and freed without harm. Lifting the turtle by its tail can cause permanent damage to its vertebra and cripple the animal.

If you have removed the turtle from the trap with all digits intact and you intend to clean and eat this beast, the purging must begin. Turtles often live in nasty areas (mud, slime, and even polluted water). All nasties can and do become lodged in the areas of their body squeezed between their shell and their plastron (bottom shell). To purge the animal, place the turtle in a tub or bucket with water. The water is changed daily, once the water stays clear, the nasties have been purged from the turtle and is now ready to be cleaned for cooking.

There are several ways to clean a turtle. Like field dressing a deer people will develop the method that works best for them. Most will agree that the cleaning process begins with separating the turtle from its head. There have been many stories told of a snapping turtle biting even after the head is removed from the body. Some of these stories may be true. The turtle’s nervous system is straightforward and allows for the head to continue biting for several minutes or longer after separation. Some prefer to cut the plastron away from the reptile, and others leave it connected to preserve the entire shell as a trophy. The meat (seven different types) is cut away from the neck, tail, legs, and quarters. There are also two strips (like back straps) of delicious meat along the back of the animal.

The meat can be cooked in many ways. Larry’s favorite recipe is to parboil the meat and then cut it into cubes. After soaking in buttermilk for several hours, the cubes are dipped in flour and deep-fried. He calls them turtle nuggets and claims they are delicious. He also uses the cubes in stew or turtle soup.

The Common Eastern Snapping turtle inhabits Michigan and can live up to 50 years. The common snapping turtle can deliver a bite up to 650 newtons, the scientific measurement of bite force. This snapper’s typical bite is around 200 newtons. For comparison, a human’s bite force can measure more than 1,300 newtons. I will believe the scientist but do not want to be part of the testing.

Snapping turtles can lay up to 100 eggs in their nest. However, 20 to 40 eggs are average. Incubation of the eggs is weather dependent but, on average, will take between 75 and 95 days. Turtles tend to lay their eggs at the same time in the same place year after year. After she lays her eggs, the female turtle does not stay with the nest. Therefore, the nest is very vulnerable, and predators destroy 80 percent or more of the eggs.

Larry has invited me to check turtle traps with him this summer. I am looking forward to spending time with him and learning more about this pastime. Larry is planning to dive for turtles as well. This he will do from a pontoon boat in clear shallow water. When he spots a large snapper burying itself in the lake bottom, he will dive in and try to catch the turtle underwater. I have made it clear that on this adventure, I will pass. Friendship has its
limits.

Larry has found a way to spend time outdoors with his daughter, and that deserves my admiration.