When I first started chasing whitetails, useful hunting information was hard to come by. Without a cell phone and extremely slow dial-up Internet, I learned a bulk of my hunting knowledge through trial and error. When I did get a chance to talk to someone with bow hunting experience, I would hang on to every word they would say. It didn’t matter if they were a skilled hunter or not; I just tried to soak up as much information as possible. When I was starting, I can vividly remember multiple hunters telling me not to waste my time hunting in October—encouraging me to wait until early November when it cooled off, and the bucks started to rut. It wasn’t until years later that I realized that there was excellent hunting to be had in October and that the rut started long before the first November morning.

As my passion for deer hunting continued to grow, I wanted to be in the tree as often as possible. That resulted in lots of days in the timber during October. Longer days made it easier to sneak out and hunt for a few hours on the weekdays, and I took full advantage of that. The more I observed deer, the more I began to better understand their behavior. For years I kept a detailed log of my days in the field, keeping track of the number of deer seen, weather conditions, etc. This information helped me understand whitetail behavior and how it is linked to weather conditions and time of year. Although my old logbook is now collecting dust, I still monitor a lot of the same information through the use of trail cameras.

I’m a fanatic when it comes to analyzing trail cam photos. I am continually monitoring the date, time, wind direction, pressure, etc. of every picture I get of my target buck(s). I’m reasonably sure my wife thinks I’m losing my mind by the end of the deer season. There’s a running joke in our family that a buck I’ve been chasing the last two years, nicknamed Lopsided, may or may not even exist. Even if you’re not obsessed with trail camera photos like I am, they can provide you with a lot of information in a very short amount of time. This information, coupled with lots of hours in a tree, has changed my definition of what I refer to as the pre-rut.

If you asked most Michigan hunters, they would probably say the pre-rut starts somewhere around October 25 and ends around November 3. Although I don’t disagree with those dates, I think it starts earlier in October. To me, the pre-rut begins when the older bucks start exhibiting rut like behavior and thus become more vulnerable. Most years, I start to notice the first signs of the pre-rut sometime between October 14-17, the time frame many hunters refer to as the “October Lull.” This is when I start seeing a change in my trail camera photos and visual sightings. This kicks off the beginning of what I believe is one of the best weeks of bow season. The first and most obvious sign that things are starting to change is a dramatic increase in the number of scrapes on the forest floor and how bucks use them. 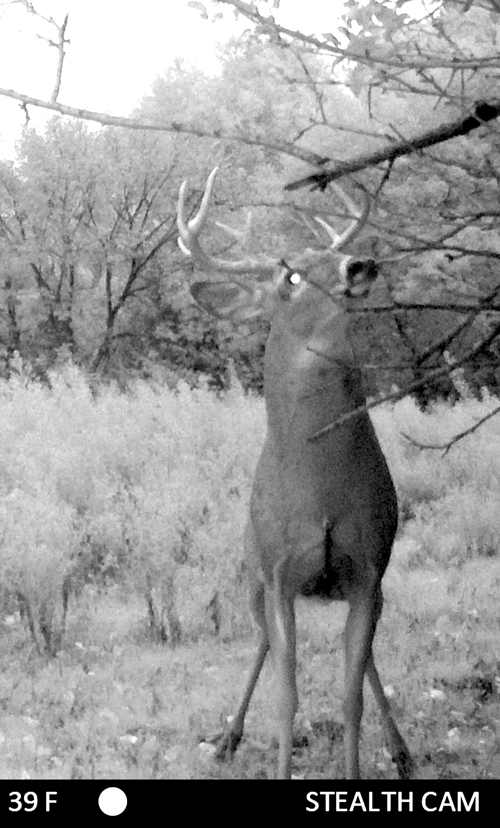 The date on the author’s trail cam photo is October 13 of last year.

The first factor I consider when analyzing a new scrape is its location. Although bucks will continue to use traditional boundary scrapes this time of year, my research has shown that most of this activity occurs at night. However, new scrapes that appear for the first time in October, especially those within close proximity to a bedding area, often produce substantially more daylight encounters and pictures. As the pre-rut begins, I’ve also noticed a considerable increase in the number of bucks that will hit the same scrape. Also, this is the time of the year when you start to see bucks that are new to the area. Some of these bucks will stay in the area, others are just passing by, but their presence can be a good indicator that rut-like activity is starting to pick up.

How often bucks use scrapes also changes during the pre-rut. Bucks will start to spend more time at each scrape, making sure to leave their mark. This is very evident if you’re using the video function on your trail camera, or happen to see them in person, but it can also be figured out using photos. Paying close attention to the time spent at the scrape as well as the condition of the scrape after the buck leaves should give you a good idea of how much time he spent there. As the pre-rut wears on, the time a buck spends on a scrape can help you gauge how close he thinks a doe is to coming into heat. Carefully monitoring these changes can help you predict when to be in a treestand and also where to hunt.

Once I think that things are getting started, I like to focus on scrape lines and use historical data to predict where a buck is likely to make scrapes again. If you hunt an area long enough, you usually figure out a few areas where bucks like to scrape; it might be a particular ridge, the edge of a bedding area, or even a specific tree. Knowing when the bucks in your area are starting to show signs of the pre-rut and using that information to determine when and where to sit can help you increase your chances of seeing that buck in person.

Last year I had an encounter with a buck that helped to reinforce this theory. I had a camera set up on an old apple tree where bucks tend to make a scrape every year. I happened to be walking through that area after a morning hunt and noticed a new scrape, so I pulled the card and was surprised to see a nice buck on it the night before. I had never seen this buck, and he was quite recognizable, with a unique rack and tall brow tines. He looked to be a 3 1/2-year-old buck, but I wasn’t for sure. The next morning I headed to a small oak flat near a bedding area located a few hundred yards from where I got the picture. After a pretty slow morning, I caught movement about 75 yards away. It was the buck from the trail camera photo, and he was actively working a scrape. He ended up walking by my tree at less than 20 yards and made multiple scrapes within 100 yards of my stand. I decided not to shoot, but it was an incredible encounter, the date was October 15.

Although it’s far from a perfect science, knowing when the bucks in your area are getting in the mood can significantly help your chances of notching a tag this year. This can be different every year and will certainly vary depending on where you live/hunt. In the central part of the state where I do most of my hunting, it seems like things get started about a week earlier than most people think. Times have certainly changed since I climbed into my first treestand, but I still know plenty of hunters that sit most of October out. One thing is for sure; you won’t find this bowhunter sitting on the couch waiting for “Sweet November.”