With the crisp days of autumn here, I increase my explorations of the wondrous world of our wetlands, swamps, and marshlands. But this year, as in years before, I will be watchful for, and ever wary of the scarlet demon of our wetlands, a toxic tree-like shrub that presents a clear and present danger to humans that have the misfortune of making physical contact. Even touching or brushing against any part of this swampland beauty may lead to a world of woe, and in some severe cases of exposure, a visit to an emergency department follows. 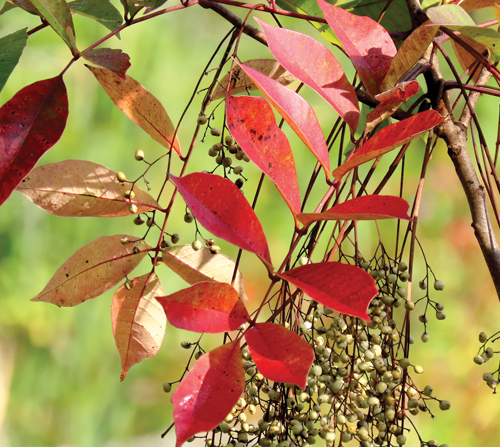 Hikers, hunters, fishers beware! Poison Sumac (Toxicodendron vernix) is abundant in the Lower Peninsula of Michigan and often “hides” in plain sight not far from deer blinds near marshes, wetland-embracing trails, cabins, and campsites in the lower half of the Lower Peninsula. I have never seen it in the Upper Peninsula or north of an invisible line from Manistee to Tawas, but that does not mean it’s not there. And when a field guide location disagrees with a plant, believe the plant!

I’ve had close encounters, some accidental, some intentional, that led to great photo opportunities in Oakland County, and that’s where the accompanying photos were captured. Bottom line: Know what poison sumac looks like, and then it’s no longer a hidden danger, but an intriguing and, at times, spectacularly beautiful plant of our wetland landscapes.

Poison sumac is incredibly nondescript and difficult for a novice to identify in the early part of summer before it turns scarlet. Some plants appear in wide-open marshes, while others flourish at the edge of the woodland and look like part of the forest and may be over fifteen feet tall. They all present a clear and present danger, no matter what the season or color.

There’s a park boardwalk in Oakland County where back in late August, the still green leaves were hugging the edge of a fishing boardwalk just waiting for a non-aware victim to brush against it.
The shape of poison sumac leaves are one of the clues for identification. Botanists describe them as “pinnately compound.” That means that the leaf, which is about 18 inches long, is really composed of multiple leaflets joined by short stems. The number of leaflets varies, but it will always be an odd number, usually between 5 and 13. The odd number appears since each leaf has a lone leaflet at the tip.

The tiny berries of poison sumac present an excellent identification clue and also helps to differentiate it from non-poisonous staghorn sumac (Rhus typhina), a plant whose fussy red berries are sometimes used to make tea. Staghorn sumac berries are in thick clusters that point upwards, almost like an upside-down ice cream cone, and it has thick fuzzy stems that resemble deer antlers in velvet; a feature never found in poison sumac.

Wetland loving poison sumac has tiny oval-shaped whitish-yellow berries that dangle downwards and leaflets attached to narrow red smooth stems. Those whitish berries warn those in the know to “Stay away!” as these specimens clearly display.

Poison sumac is rich in urushiol, the same oily substance found in poison ivy. Direct contact with the toxic oil usually creates a highly irritating rash known as contact dermatitis that may require medical attention. Direct contact means touching or brushing against any part, including the leaves, stems, flowers, berries, and roots. Even contact with a dead poison sumac plant can cause a rash. The handling of anything that came in contact with the plant, such as clothing, hiking shoes, archery equipment, gardening tools, fishing gear, and even pet fur, can also lead to the painful rash. The dermatitis is characterized by bumps and blisters that can be extremely itchy and are usually very noticeable. Swelling may also occur in the area of contact. Eventually, whether they are scratched or not, the blisters tend to break, ooze, and then crust over.

The good news is that the rash that usually appears 24-72 hours after exposure is not contagious, and you can’t catch it from touching the blisters on someone else; however, it can be spread if the poison sumac oils remain on the skin, clothes, or shoes. The bad news is the oils can bind to smoke during cleanup projects or brush fire, a fact some homeowners and firefighters have learned the hard way.

Sensitivity can increase with exposure; leaving victims and physicians wondering, “What’s this rash all about?” especially when it appears on the face or neck and the victim truthfully states, “I never even walked near poison ivy,” remaining blissfully unaware they encountered poison sumac at a face-slapping height while walking a trail or fishing at a lake. Many physicians, and even some dermatologists, are unaware of the presence of poison sumac in our county and its year-round potency. Dermatologists, however, can be of great help in treating the blistering, oozing symptoms of exposure, but prevention is the way to go when possible.

Situational awareness, followed by avoidance, is the best method to avoid the painful rash. Still, I keep a popular product known as Tecnu Extreme (www.teclabsinc.com ) in my grab and go bag that accompanies me on an everyday hike or multi-day exploration. And just to clarify, I have no financial interest in the company, but that stuff works! It does. And if I even think I may have been exposed, I use it to remove the invisible oils as soon after the initial exposure as possible.

October is the season for escaping to the cabin to hunt or fish and nature-embracing outdoor activities under colorful canopies of rustling leaves. And rest assured if you are in the lower part of the Lower Peninsula, among those colors is the brilliant scarlet of a healthy stand of poison sumac, our toxic swampland demon. It’s waiting— just for you.

Jonathan Schechter is a naturalist and avid hiker in Oakland County. Email: oaknature@aol.com