Using deer calls during the archery deer season can be one of the most exciting and rewarding tactics for bringing a whitetail deer into shooting range. With a wide variety of commercial calls available today on the market it’s not difficult to find one that mimics a fawn, doe or buck.

It’s important to have several different types of calls so that you can adapt to deer as they change their behavior throughout the fall. For example, you wouldn’t want to blow aggressively on a grunt tube call during the first few weeks of the archery season. Instead, try blowing gently on a doe fawn call. A bleat or bawl may spark the interest of a mature buck or doe and send them running in towards your location. I experienced this while bowhunting during the first half of October one year. While still-hunting I came upon the corner of an alfalfa field and spotted a doe with her two fawns grazing on a hill out into the field a short distance. As I began approaching the field I placed a tree between myself and the deer and kept inching forward closing the distance and remaining concealed at the same time. Periodically I would stop and blow my alarm call, which gave out a loud bawl. This particular call caught the doe’s attention and sent her running in towards me to investigate. Unfortunately, she discovered that the alarm call was being made by a human and caused her and her two fawns to run for the safety of cover. 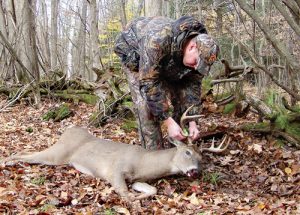 The author used a grunt call to help lure this 8 point into shooting range. Author photo

As the amount of daylight continues to decrease throughout the fall us bow benders can start altering our calling tactics. With the exception of the above story I rarely do much calling until about the third week of October. I consider this to be the magic time for calling in the deer woods. The does aren’t quite in heat yet, but regardless the bucks are starting to seek them out because of the increase in their testosterone levels. This is commonly known as the pre-rut phase. By using a grunt tube call I was able to harvest two bucks within six days of each other in 2005. One was taken on October 26 and the other on November 1.

Blowing gently on a grunt tube call can send a nearby buck running in to check things out. The key is to not overdo it, although it is tempting at times when deer activity is slow. I prefer giving out two to three grunts in a row spaced about two seconds apart and then remain quiet for approximately thirty to forty-five minutes. It’s important to call at random times so that the sounds are more natural.

When a deer is spotted I pay close attention to its behavior. If it is coming directly in to my treestand or looking in my direction I cease calling. If you continue calling you risk the chance of the deer pinpointing your exact location. However, if a buck is off in the distance running, a couple of short grunts may stop him instantly and send him in your direction.

Sometimes it may be necessary to grunt when the buck is within shooting distance. You’ve seen it many times during hunting videos. The hunter comes to full draw and then lets out a short grunt in order to stop the moving buck in its tracks. This requires taking a steady aim at the vitals of the deer and immediately releasing the string once the deer has stopped.

Gradually bucks will become more active into the late morning hours, and as the peak of the rut approaches throughout the day you can begin using your grunt calls combined with a doe in estrus bleat call. This will create a sense of competition among bucks in your hunting area and help bring them near your tree stand for a shot.

Spend some time during the off-season practicing the skill of calling deer. If you’re new at calling or have recently purchased a particular call, become familiar with what it’s capable of. Outdoor shows and sporting goods stores are great places to find people that are proficient in calling. Another great way to learn about the different types of calls deer make is by watching a video or DVD on deer calls. These could also help you call deer in close enough for a shot this fall.