The thrill of seeing a Booner Buck taken by your son 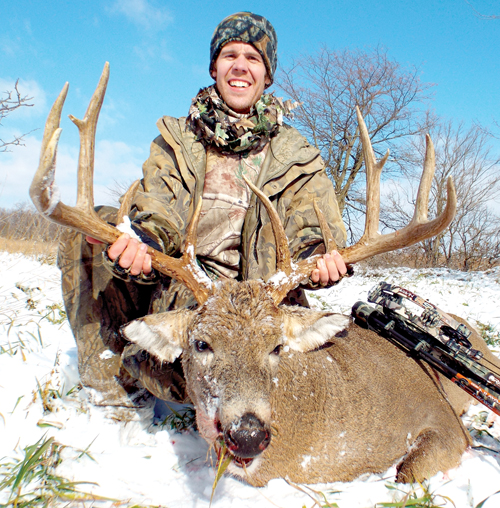 A branch snapped, and suddenly a doe pranced through the underbrush. In the distance, there was a movement from a huge whitetail body. From the dense thicket and tall grass, a massive rack sparkled in the sunlight. A huge swollen neck and thick chest supported the super-wide rack. He headed directly toward the hunter with nose testing the wind, head bobbing along the fresh snow searching for the scent of a hot doe.

“I could see breath escaping his nostrils,” said Zach Darwin as the mega-buck bumped the doe directly past his stand. “The minutes seemed to pass like hours as I watched the monster buck slowly approach through the powerful Scorpion scope. Finally, he slipped into easy archery range, and at 25-yards, the rack looked 40-inches wide as I centered the crosshairs on his chest. He was turned slightly toward me, still coming closer, then he suddenly stopped, turned broadside, and I squeezed the trigger on the Ravin crossbow,” Darwin described.

“I could hear a solid bone smashing ta-wack as the NAP Spitfire 3 Blade Edge broadhead smashed through his shoulder and blew out the other side. The big bruiser mule kicked, dashed through cover, stumbled, but recovered and sprinted into a grassy field with tail wiggling and head going down. Seconds later, I could see the huge wide rack sticking far above the snow,” Darwin said.

It was over in a matter of minutes, and Darwin accomplished a goal few Michigan hunters ever achieve; he harvested a Booner buck with archery gear. He felt deep satisfaction as he found a heavy blood trail and came upon the monster buck lying on the blanket of fresh snow. As he touched the massive rack, he felt great satisfaction and a sense of accomplishment after 17 years of chasing whitetail bucks. It was a dream come true to harvest such a magnificent animal, and he felt privileged to have a chance to hunt and score on the once in a lifetime trophy whitetail.

Zach’s monster buck resulted from years of hunting, countless hours on stand under a variety of weather conditions. He enters the woods long before daylight and stays on stand until darkness falls. Years ago, he learned the advantages of using multiple treestands, and when the weather turns sour, he gets down and dirty and stalks bucks during fog, rain, sleet, and snow. High wind, falling temperatures, and other weather-related conditions cause him to use various productive hunting techniques. He seldom hunts the same stand more than twice and is constantly scouting for big buck sign.

Perhaps his deadliest strategy is to spend time afield during the rut when bucks are on their feet chasing does, covering ground and offering hunters a golden opportunity to score on the buck of a lifetime. This narrow window of opportunity kicks into high gear in November, but anytime a doe comes into heat, you can expect excellent hunting through December. Rut crazed bucks are active regardless of the weather. The trick to buck success hinges on your ability to spend countless hours on stand during this special time.

Darwin was working stream banks, hollows, low ground to stay out of the howling wind and blizzard conditions the day before. He was stalking along a ditch bank in a somewhat protected valley when he noticed huge buck tracks, fresh scrapes, and rubs with fresh bark on top of the snow. He slowed his speed and soon noticed a large buck chasing a doe. He got a glimpse of a huge rack and deer with an impressive body. The duo pranced past in thick brush and disappeared into a blizzard of fast-falling snow.

The next morning he dropped me off a mile from his hunting location, parked a half-mile from where he saw the large racked buck, slipped down a dirt county road, crossed a wooden bridge before daylight, and hunkered in chest-high grass along the frozen ditch. It was cold, north wind 15 mph as skies cleared, and he made his way into the thicket. That’s when a flock of wild turkeys flopped down from roosting trees and started feeding where the hunter wanted to take stand. So he remained motionless, careful not to spook the wary birds, and pulled up his face mask to cover everything but his eyes.

Few deer hunting thrills can compare with the excitement of taking early morning stand in the exact area where a monster buck is on the prowl. The sky faded from faint pink to yellow as the sun illuminated the buck sanctuary. The ground had a blanket of fresh snow, and he could see big tracks. To his left was a large scrape the size of a dining table. To his right was a fresh rub and black dirt pawed on the snow by a rut crazed buck. He could feel his pulse quicken when he noticed deer coming his way.

When he took stand, he cleared snow and leaves from beneath his feet, so if deer came close, he could move silently. When the deer eased his way, he made a final move and turned his left shoulder toward the target to provide the ideal shooting position without further movement. At one point, the small doe leading the buck spotted Darwin, came to an abrupt stop, and stared in his direction. He remained motionless, didn’t blink his eyes, and allowed his full camouflage to do its job. Apparently, the doe had no idea the object was a human and went about her business and slipped through the undercover. The trailing wide racked bruiser approached through thick underbrush, at one point turning his mule-like head sideways to get the colossal antlers through the underbrush. Soon the huge adult buck moved into perfect shooting position. Zach slowly raised the Ravin crossbow and made an excellent shot.

I was stalk hunting the same valley when I noticed Zach waving frantically at me. As I approached, he seemed very excited, pointed to a brown clump in the snow with a massive rack. Few thrills in hunting compare with walking up on a Booner buck taken by your son. In the fresh snow laid one of the largest deer I’ve ever seen. I’d guess live weight 300 pounds with an extra-long body, swollen neck, and moose-like snout. Its most impressive characteristic was the super-wide, Texas-like massive antlers with tall tines and extra kicker points off G3s, which enhanced the spectacular spread. This buck was an old-timer, maybe six years old with a big belly, sway back, grayish face, and huge overall size.

We celebrated the impressive kill, hugged and danced in the snow like excited kids on Christmas morning. Snowflakes danced in the air as I captured the image of Zach’s best buck ever on film. He was smiling from ear to ear while holding the impressive dream buck. I’ll never forget the fun, excitement, and proud feeling I had to see my boy take a trophy monster buck.

Some might say this is a good example of a lucky hunter taking a record deer. Keep in mind the definition of luck is when preparation meets opportunity. Zach has honed his hunting skills, practices shooting year-round, and has a jump on most archers because his woodsmanship skill level is advanced. He uses quality broadheads, arrows, and Ravin crossbow. Gone are the days of crippling deer, missing shots, and struggling to walk through brush and timber with clumsy archery gear. The Ravin is compact, fits nicely behind your back with bolt nocked, and you can stalk hunt without the broadhead catching on brush.

The archery industry is still struggling to catch up to Ravin’s technological advancements. This crossbow is super-fast, compact, lightweight, and helps hunters to score on deer. Weighing just 6.5 pounds, it is a joy to carry, although I recommend a sling when walking. One big advantage is you can cock and load the bow and carry it over your shoulder without the arrow dropping out of shooting position while climbing treestands, going up and down hills, or through dense cover. This means if the moment of truth suddenly arrives, you can drop the bow from your shoulder, get into a shooting position, and fire fast as lightning.

Ravin was the first to create a frictionless arrow flight system that allows bolts to free float above the rail, eliminating friction and producing unmatched downrange accuracy. This incredibly compact bow shoots 430 fps, has an ergonomic grip and uniquely built-in cocking system. It is powered by Helicoil Technology that allows cams to rotate 340 degrees, and when fully cocked, the bow is only 6-inches wide axle-to-axle, which means you can wiggle through the woods and underbrush with ease. The Trac-Trigger firing system allows straight nock travel, and the trigger pull is crisp, light, and ideal for deer hunting.

The New Archery Products Spitfire Edge is his broadhead of choice because it has bone-crushing maximum penetration, with offset blades producing huge entry and exit holes. The cutting diameter is 1 3/4 inches, and 100 grains is ideal for long-range accuracy. This broadhead has straight blades for slicing and serrated sections for cutting through bone. One advantage is that the blades fold down, eliminating the possibility of slicing your string or cables like conventional open razor-like blades. The combination of a fast shooting bow and open on impact broadheads means you can shoot through a deer with ease.

If your goal is to shoot a trophy deer, there is more to scoring than just accurate shooting. First, it helps if you can scout or locate a big buck before entering the woods. Most savvy Michigan hunters hunt out of state when in search of high scoring whitetails. Next, you need to have scent control. Some smart hunters use Ozonics, others rely on scent masking sprays and scent eliminating clothing, but the idea is to hide your human odor from approaching deer with a keen sense of smell.

I simply cannot say enough about camouflage. The trick to whitetail success often is dependent upon your ability to hide from deer. Plenty of hunters hide in modern ground blinds; plenty get off the ground in treestands, but a few get eye-to-eye with bucks where their camo is a must. You have to cover everything and match your clothing to the environment where you are hunting. Savvy hunters wear gloves, complete face mask, and use archery gear that is fully camouflaged.

Zach’s monarch was a special buck. Its wide rack measured almost 26 inches, and the 10 long points were highlighted by twin kicker points sticking off the G3s. It certainly had plenty of mass and an extra-long brow tine that curved far left, enhancing a gross score near 180. Most importantly, the special buck highlighted a successful father and son hunt and fueled dreams, daydreams, and sweet memories to last a lifetime.