A buck and bear–the same day!

The black bear came in like clockwork, looking for the tasty morsels that Aubrey Sincic and her father Jake had been placing there since baiting for bears was legal in August. They had several trail camera photos of this particular bear, who had shown up daily at around 4 p.m. Sitting in a ground blind thirty-five yards away, Aubrey, her heart racing, calmly raised her .270 and centered the bear’s vitals in her cross hairs. In the next few seconds, she would accomplish what few sixteen-year-olds, male or female, have accomplished. She harvested a whitetail buck and a bear on the same day, September 13, 2020.

The previous day was the youth hunt’s opening day in Michigan as Aubrey and her father sat in their blind on private property in Grand Traverse County. Waiting for larger bucks that they knew frequented the area, Aubrey gave a spike buck a pass on September 12. After the evening hunt that day, knowing that the opening day of bear season was the next day, they voiced how unique it would be to harvest a deer and a bear on the same day. 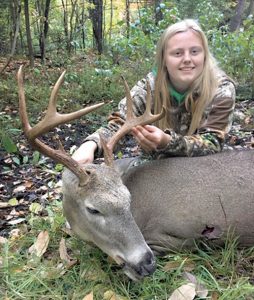 In Oct., during the archery season, she connected with this dandy 8-pt. with a 17-inch spread.

The next morning found father and daughter watching the same cedar swamp as the previous day. As the spike buck came within twenty yards of the duo, the .270 that Aubrey had practiced with diligently, barked and the buck crumbled to the ground. It did not get a pass on this day. Round one was over, and Aubrey’s focus changed from deer hunting to bear hunting.

Aubrey was fortunate to come into possession of the bear tag; a friend of the family had unfortunately been diagnosed with cancer and was having surgery very close to the bear season opener. He checked with the Michigan DNR about transferring the tag, made the necessary arrangements, and gifted the coveted bear tag to Aubrey.

Aubrey, along with her taxidermist father, set out to bag a bear. Selecting a promising tract of public land in Kalkaska County, they baited every other day early on and then baited every day as opening day grew close. Their baits of choice were cherries, pretzels and Lucky Charms cereal. Things got really exciting when they were run off the bait while refreshing it by a couple of hungry bears. Their trail camera pictures confirmed that several bears and a decent sized one were frequenting the bait daily at approximately the same time.

They climbed into their hide on a ridge about 3 p.m. opening evening. They didn’t have long to wait. Jake was nodding off to sleep and stood to stretch when Aubrey punched his leg and whispered that the bear was heading in to the bait. After all the hard work of baiting, she put her .270 to work, and the 245-pound bear was hers. The most exciting hunt of her young life had culminated in success, not to mention that she was able to put her tags on a bear and a buck only hours apart.

Aubrey’s hunting success does not end here this season. Taking her crossbow into a double ladder stand with Jake early in October’s archery season, they snuck into an autumn olive thicket where they had seen promising deer sign before the season. They watched as an 8-point with a 17-inch spread stood up out of his bed at 46 yards. The buck proceeded to make a couple rubs before coming down a trail where he turned his attention to a squirrel, presenting Aubrey with an eighteen yard broadside shot. Having practiced several times with her crossbow and at distances farther than this, she made a perfect double lung shot.

Aubrey has been tagging along with her dad to the woods and the taxidermy shop since she was six years old. She has learned about animals, animal behavior, and shooting skills from her mentor father. She has also assisted in putting mounts together at Jungle Jakes Taxidermy and doing some of her own taxidermy work.

Ironically enough, after she graduates from Elk Rapids High School, where she is a sophomore, she wants to become a veterinarian. She has ambitions to hunt for elk, antelope, mule deer, and turkey. While the year 2020 has been precarious at best, it is not one this hard-working young lady will soon forget.