The Nickname ‘Beams’ just made sense!

Like every year during the warm summer months, anticipation was high to get back into the woods, chasing whitetails. The fall of 2020 is special, although this story starts back in September of 2018 when I put my cameras out in late August, and I had gotten a fair amount of pictures of a wide mainframe 8-point with tall and curvy brow tines and junk points coming off his bases. I thought nothing of it because this deer was not a shooter.

About two weeks later, trail cam photos showed he had broken off both his left G2 and G3. Again, I thought nothing of the situation, just a young buck breaking off his rack, which was nothing unusual. A few weeks went by, and I ended up taking my target buck on opening day of gun season. After that, my season was done because I did not see any more mature bucks on the cameras. 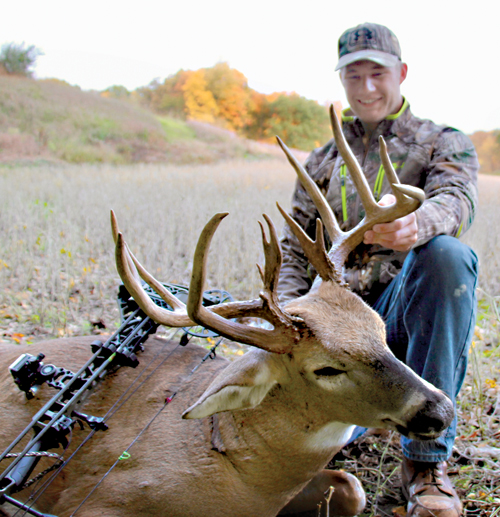 Fast forward to September of 2019, I pulled my camera cards for the first time in early September, and the very first picture from the night that I put it out was of him. Those brow tines gave it away, and he had broken his right G2 in half, so I knew it had to be him. He had blown up into a 150s class buck. I knew he was the deer I was going to be hunting.

After about three weeks of hunting this deer during October, with no sightings, I pulled my camera card on the way out. I could not believe he had broken off his entire right side directly at the base. I could only hope he would make it one more year. After not seeing this deer on camera for about six-weeks after opening day of gun season, I assumed someone had taken him. But on January 5, I got trail camera pictures of him at midnight.

This summer, I could not stop thinking about the potential of this giant running around. As normal, I put my cameras out in late August and pulled them about two weeks later. I plugged the card into my laptop, and my heart stopped. There was this crazy tall, wide, unique buck with a third main beam photo almost every other night.

I decided to nickname him “Beams” because, well, it just made sense. This year, I told myself I would take scent control more seriously than ever and only sit spots if it had the absolute perfect wind conditions. I was going to hunt this deer no matter what DeerCast said and what the weather was. I was going to hunt as much as I could early season.

More and more pictures came in of this deer, and I finally put it together in my head. By looking back at what the wind was the day he came from the south to hit scrapes and what the wind was when he came from the north. I knew where he was bedded on what winds and had closed in on his main bedding area. After hanging a few more sets just a week before opener for bow, I hoped he wouldn’t break off his rack again.

As a cold front hit Mid-Michigan the first week of bow season, I knew that this was my chance. The cold front passed with no luck, and I ended up missing a different shooter on October 8. I felt discouraged about the situation, especially after looking at the weather and seeing lows of 60s and highs of mid-70s for the weekend. I was reminded I made a pact to hunt regardless of the weather.

On October 10, I sat the morning and didn’t see much; only a few does and a small buck. That evening I got out nice and early at about 3:45. I was sitting right on the edge of a giant bean field 40 yards from a big pond. It was slow, and the deer did not start moving until about 6:30. Does started pouring out of the field’s edges, and then a few small bucks started sparring in the beans. It was perfect; the right wind and the air started cooling down a little. At about 7 p.m., there were about 15 does in the field and a few two-year-old bucks.

Five minutes later, I saw a doe come right to me in the beans and then veer off. Thirty seconds later, I heard some commotion to my right where the doe came out, and following that was the deepest grunt I had ever heard in the whitetail woods. I looked over, and I could not believe my eyes. It was Beams, following the doe. I grabbed my bow and drew back. He followed the doe’s exact trail, so I knew what pin to use. I stopped him at 18 yards, quartering towards me. I put it right behind his shoulder and let it fly. He ran off to about 80 yards.

I was in shock, and I didn’t believe what had just happened. I snuck out of there about 30 minutes after I saw him lay down. I wanted to wait until dark to take no chances of bumping him.

We gave him about two hours after the shot because I wanted to play it safe. We got out there and looked at my arrow. It was covered in dark red blood with some bubbles in it. The blood was spotty and not ideal following the track after the arrow. We tracked him for about 80 yards until we came up to where he went down, except he was not there. I started to question where I had hit him and felt anxious. We found one more bed about 20 yards from the first, then a very bad blood trail leading into a 10-acre parcel of woods with a two-track down the middle. As hard as it was, I made the call to back out because it would get down to the low 40s that night, so I knew he would be okay. After some encouragement from my friends and family, I knew I was going to recover this deer. A sleepless night for me is an understatement.

At 7:30 a.m., I got the call from my two friends who had helped track the night before. “Let’s go find this fricken deer.”

We took the two-track back to where the last blood ended, and we were not even stopped, and I spotted him while sitting in the passenger seat! He was laying there right along the two-track, not 30 yards from last blood! The excitement ensued, and I could barely contain myself. I could not believe that we had recovered him! The celebration started with my best friends David, Allen and my amazing girlfriend, Kaycee.

This deer had 15 scorable points, including an 18-inch third main beam, making him by far my biggest buck to date. He was covered in fat and weighed in at 213 pounds field dressed and aged by the taxidermist at 6 1/2 years old. By the grace of God, I was able to take this deer, which is my biggest to date, and great friends accompanied me through the whole process of harvesting this great Michigan buck.

I prayed for this deer to give me an opportunity, and God put him right into my lap. Truly a day I will never forget.