It’s ironic that anglers blame one species for thriving when another species suffers. In Saginaw Bay, anglers have been blaming the walleye for “eating” all the yellow perch for decades. The ironic part is that the Saginaw Bay walleye fishery has never been better, and perch numbers on the Bay have also been rebounding nicely.

There is little doubt that walleye are opportunistic feeders, and they chow down on yellow perch when the opportunity presents itself. It’s also becoming obvious that the yellow perch of Saginaw Bay can expand their population despite predation by walleyes.

Biologists do not know for sure why perch populations spike and fall so commonly, but currently, Saginaw Bay is enjoying a spike in yellow perch numbers, and the average size of these fish is impressive. Last winter, good numbers of perch were caught that averaged 10 to 14 inches in length! Perch in that size range are excellent fish in anyone’s book and worth working at finding and catching. 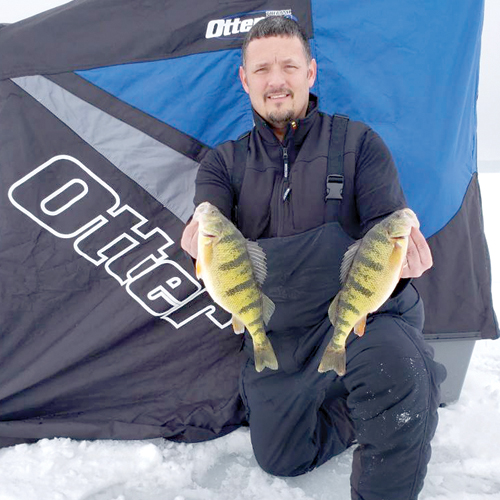 Most of the anglers who got on good numbers and good sizes of yellow perch on Saginaw Bay last winter did so by accident. “When perch get to be 12 inches long or bigger, they start hitting the same lures walleye fishermen are commonly using,” says Jake Romanack of Fishing 411 TV. “I caught a number of noteworthy perch last winter on Bay de Noc on Do Jiggers, Moonshine Jigging Spoons, and even Jigging Rapala baits. Since these days walleye fishermen outnumber perch fishermen by about 10 to one, it’s no surprise that walleye guys are catching perch by accident.”

The Good Word is Spreading

It doesn’t take long before word of good perch fishing starts to spread. Because the yellow perch caught on Saginaw Bay last winter were so impressive, many anglers are in the process of gearing up to better target perch.

Because Michigan law allows anglers to use up to three fishing lines per person, it makes sense to target both yellow perch and walleye simultaneously. The best approach, however, is not to use exclusively walleye sized lures. A better approach is to dedicate at least one line to tackle more suitable for targeting perch.

The One, Two, Three Punch

“This winter on Saginaw Bay, I’ll be geared up to fish two lines for walleye and one line for yellow perch,” says Romanack. “Inside my flip shack, I’ll primarily target walleye by running one line as a jigging presentation and a second line as a dead stick with a live shiner minnow. Outside my shack and nearby, I’ll run my third line as a tip-up baited with a smaller perch size minnow positioned just off bottom.”

Romanack’s one, two, three approach gives him a fighting chance of knowing when a school of perch have moved in. “When perch show up, I can adapt several ways,” explains Romanack. “I keep a spare jigging rod handy set up with a small jigging spoon and baited with a small minnow. This rig sits in the minnow bucket so I can reel in one of my walleye lines and quick-like drop the perch rig to the bottom if I suspect perch are in the area!”

Some of the most productive perch jigging spoons are those models that feature a short chain dangling from the bottom of the spoon, such as the Hali Spoon from Nils Master. Northland Tackle Company produces an aftermarket product known as the Bait-Chain Dropper Hook that comes with either a single hook or treble hook option. This makes it possible to set up just about any jigging spoon as a perch jigging spoon.

Jigging spoons with chain dropper hooks are uniquely effective at catching light biting yellow perch. The spoon provides the weight needed to get quickly to the bottom and the flash that attracts perch from long distances. This setup is also great for pounding the bottom to kick up sediment that attracts feeding perch.

The bait rigged on the dropper chain makes it easy for a perch to suck in the bait without having to engulf the jigging spoon. A small minnow, a minnow head, or a live grub like a wax worm or two or three maggots or mousies can be used for bait.

Modern ice fishermen are using sonar to help them find fish, mark bait in the water column, and judge the activity level of fish that appear on the sonar. “Modern liquid crystal readout sonar units have super-fast processors in them that make it possible to see almost instantaneous results on the screen,” says Romanack. “The goal is to have “real-time” sonar responses so that an ice fisherman can see his lure, also see fish and see how the fish reacts to the lure being moved up and down in the water column. Historically this could only be achieved with a flasher unit style sonar. Today, easier to interpret LCD units now have this ‘real-time’ capability.”

Romanack is ice fishing with a seven-inch screen Lowrance HDS Live unit. Because the Live units have a super-fast processor, they also eat up electric amps quickly. To operate one of these units on the ice requires using a larger amp hour lithium battery.

“A traditional portable sonar unit is powered with a seven to nine amp lead-acid battery. To power a modern LCD requires at least a 20 amp lithium battery, and some guys are even using larger batteries,” explains Romanack. “I made my own portable sonar unit by bolting a Lowrance HSD Live 7 to the top of a waterproof hard case that houses the lithium battery. Having extra battery amperage allows me to fish all day without fear of running short on power, and it allows me the benefits of using faster high definition sonar.”

Thanks to the added amperage potential of lithium batteries, it’s now possible to wire up an underwater video camera to the viewing monitor of a high definition sonar unit.

Aqua View now produces an underwater video camera that can be married to an LCD sonar unit. The unit is called the Multi-Vu Pro Ice House Package. The net benefit is that an angler has video to see what’s happening underwater and also sonar for working fish, all from a single unit. The Aqua View unit comes with a camera and a housing box, but no monitor. The angler can use a sonar unit as the monitor or, if they prefer, a television as a monitor if they are fishing from a larger permanent shack or perhaps a wheel house ice shelter.

To use both video and sonar at the same time requires a sonar unit with split-screen capability. “Any Lowrance HDS sonar unit is capable of also linking with an Aqua View video unit,” says Romanack. “By using the split-screen feature on the sonar I can watch video on half the screen and traditional broad beam sonar on the other half. This can be accomplished with smaller seven-inch units, but the larger nine and even 12-inch units provide the angler with a bigger and easier to interpret picture.”

Lithium batteries are also susceptible to being damaged or ruined if dropped. This unique battery technology does not do well if the battery is dropped onto a hard surface.

Putting It All Together

Anglers equipped with underwater video and sonar have the best of both worlds in that they will know instantly when fish show up. The beauty of video is an angler can quickly identify the species of fish and react accordingly.

When perch show up, using terminal tackle ideally suited to triggering these light biters makes it possible to maximize perch opportunities. When walleye show up, quickly switching to terminal tackle better suited to catching walleye only takes a few seconds.

The best-prepared anglers hit the ice with rods and reels already rigged up and ready to go for both walleye and yellow perch. That way, an angler can quickly put down whatever gear makes the most sense.

“I’m carrying at least three walleye jigging sticks with different lures attached, two perch jigging sticks with different perch baits attached, a dead stick for walleye, and also a couple tip-ups I can rig for walleye or perch,” adds Romanack. “Having all this gear organized and ready to use makes it possible to shift gears quickly from catching walleye to targeting yellow perch.”

In past years when yellow perch were scarce on Saginaw Bay, it didn’t pay for anglers to carry both walleye and perch fishing setups. These days, however, with perch numbers on the rise, anglers who go prepared to catch both species will regularly be rewarded with a mixed bag at the end of the day!

While no one can predict what the ice conditions on Saginaw Bay will be this year, it’s a safe bet that when the ice locks in, fishing will be excellent. Anglers who love to catch both walleye and jumbo perch are wise to hit the ice with modern electronics, underwater video, and pre-spooled rods/reels ready for catching both species. Like every other season in Michigan, ice fishing season comes and goes quickly, so it pays to be ready.