Note to readers: I could be putting together one of those family Christmas letters, but my annual look back at the year winding down is more satisfying to write and hopefully more interesting for you to read. Maybe you, too, will be prompted to pour another cup of morning coffee (don’t forget the half-and-half in mine) and reflect with me about the recent events and experiences that helped shape our lives. If so, this column has served a useful purpose.

I stopped making those foolish New Year resolutions when I began compiling these annual reflections about 25 years ago. Or has it been 30 years? This much I do know: Very few of you ever fulfill those resolutions anyway. I am sure because I never kept them either. And isn’t it more fun to share the memorable things that happened than being reminded of our shortcomings?

• It didn’t start well, and it’s not ending well as we face a new surge from the COVID-19 pandemic. With Christmas only three weeks away, more people are being admitted to hospitals than ever. Despite the spike in infections, however, fewer people are dying from the virus, and vaccines are coming soon. Good news renews hope, but the expectation that a return to normalcy will happen is probably a myth. Disruptions this severe have consequences, but those consequences are not necessarily negative.

I like to think many Americans have become more self-sufficient while also caring more for others, especially those less fortunate. An indulgent nation blames others for its troubles, and there are plenty of targets on the dartboard—China, President Trump, Governor Whitmer come to mind—but a suffering nation can find solutions to its problems by working together for the common good.

Such reductionist thinking may be simplistic, but this eternal optimist believes better days are coming.

• In some respects they are here already. Slowly but surely our roads are being repaired. Passage of a local millage has contributed to their improvement. My farming neighbors enjoyed decent crop yields, especially corn. Our garden was more productive than usual. I saw more deer than ever during the just-ended firearms season. We have enough firewood to get through the winter, and the freezer is full. Thanks to repeated stay-at-home orders, our family has benefitted from time spent together.

The glass is more than half-full, and we are thankful. 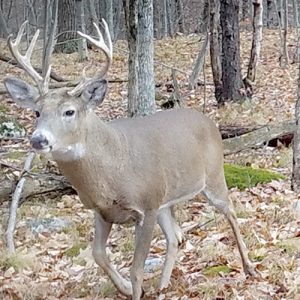 The 8-point buck the author captured on his trail cam and that he hopes to tag during the muzzleloader season.

• Standing alone in my woods one evening in late March, I watch wild turkeys settle into their nightly roost. It’s stunning how much racket the big birds make as, one by one, they fly up into the naked oaks. The clatter of broad wings striking limbs is remindful of firecrackers, and skinny branches dip and sway as a dozen turkeys test ideal spots to sleep. Watching their antics through binoculars, I can identify slim hens from bearded toms. The darkness drops, a half-moon clears eastern treetops, and it’s safe to move on slowly so as not to disturb the now-silent, unseen birds high above the forest floor. Soon I’ll be home to fluff up pillows and maneuver into sleeping position, too.

• April arrives, and once again, it is colder and wetter than normal. Early planting of corn and soybeans suffer from heavy rainfall that turns low-lying portions of crop fields into shallow ponds. In May and early June, when the fields have dried out, many area farmers will fill in dead spots with new seed rows, and some will replant entire fields. Late in April, our teen daughter and son bring home lambs and young pigs, five animals in all, to raise for 4-H projects, although there is talk of canceling the summer fair in Eaton County.

Sheltering in place has offered extra time to plant the vegetable garden with more care. An MSU soil test prompts us to fine-tune the fertilizer regimen, and for once, my bean rows are straight as an arrow. Daughter’s rabbitry has exploded with new litters, and we have added newly hatched barred rocks and light Brahmas to the chicken flock.

• I didn’t realize how much waste a family produces until the local recycling center closes, and we must resort to putting out the tin cans, bottles, newspapers, magazines, and cardboard with the other trash for weekly garbage pickup. There is more material than ever because, like most other families, we no longer travel, and the recyclables pile up. I am somewhat amazed at the sheer amount of plastic that accumulates, a near-daily reminder of how modern civilization is turning the planet into a toilet. I began recycling household waste more than 30 years ago when I read a sad commentary that Michiganders throw away enough trash every day to fill the Silverdome. I hope the local center reopens soon.

• For the first time, the livestock auction at the Eaton County Fair is held virtually, devoid of Michigan 4-H participation due to statewide program cancellation. Thanks to yeoman efforts by the county fair board, the online event is a big success for all the kids who participate. Sales are robust, due also to many buyers wanting protein in their freezers for the pandemic’s duration.

• Bird-hunting seasons open, and summer’s heatwave extends into the fall. A few September days have taken cues from summer to deliver 90-degree temperatures. I rarely hunt grouse and woodcock until October 1 anyway, but this year my first-day in the woods has to wait until October 9. And for the first time in 40 years, I won’t be crossing the Big Mac Bridge to hunt the Upper Peninsula. The pandemic prompts members to cancel our annual bird hunting camp, which dates to the early 1980s. On the other hand, there are decent numbers of grouse and woodcock in the Lower Peninsula, and by November 14, my flush rate on both species is average to above average. At age 10, setter Ragan has his best season ever at finding birds and retrieving each one taken. Another positive development: Bounce, my son’s young shorthair, appears to no longer be spooked by gunfire

• This morning, my 15-year-old son, Daniel, was helping his mother clean our garage. On an old shoe rack, loaded with sneakers, boots, and other footwear, he caught a glimpse of something shining, thanks to the strong LED lights in our garage. Curious, Daniel reached inside an old sneaker containing whatever had caught his eye and–miracle of miracles–out came my missing AyA No. 2 forearm!

How did this unreplaceable part of my expensive, fitted gun come to be in an old sneaker? Hindsight tells the story: One afternoon in late October, I stopped in Clare County for a short hunt with Daniel’s shorthair. Upon returning to the truck, I broke down my gun but was apparently distracted by Bounce, who didn’t want to go back in his portable kennel. Although the barrel and stock of my gun were safely put away in their divided case when I got home, the forearm was not there. I searched high and low, with a flashlight even, throughout the truck to no avail. My wife and son searched separately and also came up short.

The next day Daniel accompanied me back to Clare County, where we scoured the area where I had hunted with a metal detector. No luck!

So, what happened? Absentmindedly, I must have stuffed the forearm in an old sneaker roosting under the car seat. I don’t recall doing this and have no explanation why I did this, except perhaps I subconsciously didn’t want to scratch the slim forearm by dropping it in the case with either the barrel or the stock.

At any rate, I hadn’t worn those sneakers since summer. Upon returning home, I unloaded the truck, which was pretty full after a week of hunting, and the sneakers ended up on that shoe rack in the garage. As the good poet said, “All’s well that ends well.”

So, all in all, there is abundant recompense during this Year of the Pandemic. If my luck continues, during the muzzleloader season, I’ll tag the eight-point buck that has been playing games with my trail cam.