Ospreys are magnificent fish-hunting birds with striking brown and white plumage. They are among the birds of prey called “raptors,” which includes hawks, owls, falcons and eagles.

These large birds – which possess widely spread wingtip feathers in flight and a distinguishing brown stripe leading from the back of their yellow eyes to the nape – are often seen along shallow fish-filled waters of Michigan, including rivers, lakes, reservoirs and marshes. 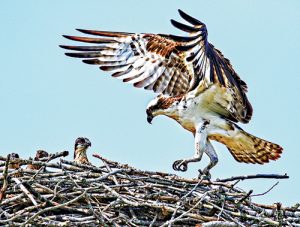 An adult osprey and young are pictured at a nest in June 2020. Mike Grosso photo.

But that wasn’t always the case. Once commonplace in the Great Lakes region, osprey populations were suppressed in the post-World War II years as the use of DDT and other pesticides caused thinning of the birds’ eggshells.

From 1998 to 2007 a multi-partner team worked cooperatively to bring ospreys back to southern Michigan. The team consisted of the MDNR, the Detroit Zoological Society, Audubon Great Lakes, MI Birds, Huron Clinton Metropark Authority, U.S. Department of Agriculture’s Animal and Plant Health Inspection Service, Michigan Osprey volunteer group, various Audubon chapters and a magnitude of volunteers. This program to rear and release ospreys was a huge success.

Today, these “fish hawks” have returned throughout the Lower Peninsula and can be seen diving for fish even in unexpected areas. There are more than 200 osprey nests across the state, including about 125 in the northern parts of the state and 65 in the southern Lower Peninsula.

The first wild chick was hatched in 2002 at Kensington Metropark in Oakland County. The osprey that fathered the chick, named “C09” for his bird band number, had been reared and released at Kensington in 1999. That bird is still alive and well and living in Brighton in Livingston County. He is now 21 years old, which is on the higher end of wild osprey life expectancy.

Once the birds were well established, the program monitored their migration routes by fitting osprey with backpack telemetry units, funded by corporate sponsors and volunteers. This phase of the program was spearheaded by Michigan Osprey, whose volunteers tracked the birds’ location on their website from 2013 to 2017. The GPS tracking devices provided information on the birds’ location as they migrated to and from Central and South America.

The ospreys made such a comeback that the DNR needed help and turned to the public to help track the birds’ reproduction and success. The Adopt-A-Nest Osprey Monitoring Program created a request for citizen scientist volunteers to monitor osprey nests in their area. This marked the third phase of the osprey reintroduction program in Michigan.

MI Birds – an outreach and engagement program created by Audubon Great Lakes and the DNR to increase awareness of Michigan birds and the places they rely on – made a public call for volunteers. The call was shared through the program’s network of followers on social media and a widely shared blog post.

“The response from the MI Birds community was amazing,” said Tom Schneider of the Detroit Zoological Society.

During the summer of 2019, 318 people participated in the “Adopt-A-Nest” program and submitted a total of 834 individual osprey observations. Volunteers submitted reports from 35 counties and reported on 143 active nests throughout Michigan.

Participation in this program requires little effort: All ages and experience levels are welcome. A minimum commitment of three 30-minute nest visits between the end of March and early July is all it takes to determine if there is a nesting attempt; if birds are actively nesting, and if there are any chicks in the nest.

“You can visit your nest more often if you’d like,” according to the MI Birds website. “Binoculars are adequate for most observations, but a spotting scope is useful to determine the number of chicks. Most nests are located on cellphone towers and are easily viewable from public roads.”

“Without the help of our citizen scientists, we would not have this valuable information,” said Erin Rowan, MI Birds program associate with Audubon Great Lakes and the DNR. “We look forward to working with volunteers again during the 2021 osprey nesting season.”

Anyone interested in being a part of the osprey nest monitoring program should contact Julie Oakes at OakesJ@Michigan.gov or Erin Rowan at Erin.Rowan@Audubon.org.