Last fall, the steelhead runs in most rivers were on the light side despite having some timely rain events. We shall see whether the spring run will make up for the lack of fish during the fall and winter. If the run continues to be weak, targeting your fishing to smaller streams and tributaries where the steelhead will be more concentrated than the major rivers will be a good plan.

While there will be sanctuaries like logs jams and other heavy cover, you can usually “reach” the holding water in a small river or creek. The stream will never be too wide or too deep so that you can’t make a presentation to the holding steelhead.

An obvious additional reason I like small rivers is that I much prefer to wade rather than fish from a boat.

Probably the number one factor in having success catching steelhead in a small river is making sure you are stealthy. In general, fish are not very intelligent, but they are innately wary. This is especially true for the older, larger members of stream resident species, but remember that steelhead have left the depths of a very large lake or the ocean and now feel vulnerable in a much smaller environment. A real key to catching a migrating steelhead is not letting them know of your presence. Once fish bust you, they become much harder to catch. This is especially true when you are fishing with artificial lures and flies. We are going to concentrate on being stealthy when wading small to mid-sized streams.

Moving in an upstream direction is probably the number one key to sneaking up on and catching more stream fish. Many anglers, especially some fly anglers and those drifting live bait, traditionally move downstream. Turning around will instantly make you more successful. Because of eyes on both sides of their heads, fish have a wide range of vision. But they do have a blind area directly behind them. Since they are almost always facing into the current, you can best approach them by wading upstream.

Even though they are looking upstream in the opposite direction, a quick movement by a large, predatory angler behind them will still likely send them scurrying for cover. So moving slowly and keeping a low profile are also important. Wearing clothing that blends in with the sky and bank vegetation will also help keep you hidden.

Moving upstream also prevents the sand and silt that you stir up when wading from betraying your presence. Some bait anglers think that sending some silt ahead of them as they wade downstream helps make their drifting crawler more effective when fishing for resident trout, but I have never seen that to be the case. Big trout, especially browns and steelhead, will know something is amiss when a cloud of silt rolls by.

The sounds you make when wading are also carried away by the current when you move upstream. But sounds do travel very readily through water, so it is important to wade as quietly as possible. Making long slow strides is better than short splashy steps. Pay attention and try not to dislodge rocks or cause them to grind against each other. A wading staff can help your stability and aid in avoiding missteps that might alert the fish. One made out of wood is better than a metal or metal-tipped model because it will be quieter when contacting the bottom. The ripples in the water surface you send ahead when wading are also not likely to reach and alarm the fish upstream unless the current is very slow. They will still be diminished when moving against the current, and slow strides will further negate them. 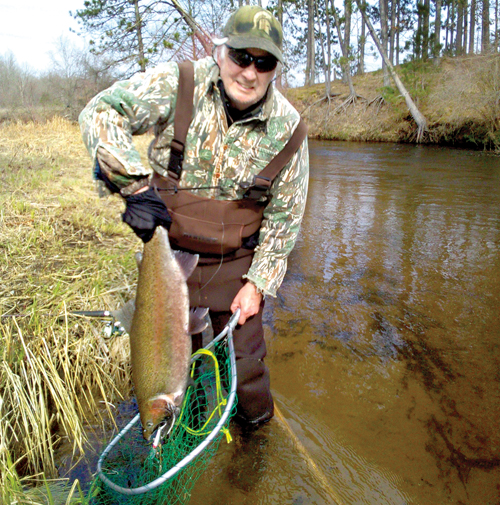 One of the ironies of the cautious upstream approach is that many lures and flies are best fished across and down. My favorite river lures are weighted spinners and minnow imitating plugs. Their most effective presentation is a quartering downstream cast and then allowing it to sweep and hang in the likely fish-holding water. The fly angler using streamers wants to do likewise.

So how do we this? We still cautiously work our way upstream and plan ahead of how we will cast to each fish holding area or feeding station as we come to it. We can still cast spinners, spoons, plugs, and streamers upstream and retrieve them downstream at a speed slightly greater than the current, so they will have action. Beads, eggs, jigs, and drift lures fished under floats can also easily be fished straight upstream. You need to take in line as it drifts back to you as opposed to the traditional letting line out as it drifts downstream from your position. A float will help you make good presentations without hanging up a lot. It is much better to position your offering a foot or so above the substrate rather than snagging up all the time.

Now let’s look at some examples of how we can sneak upstream and make across or across and down presentations. If a log goes across the stream, you can slowly and quietly wade up to it along the edge of the stream. Staying below the log, extend your rod upstream and cast across and sweep the lure in front of the log. The log helps keep the fish lying under it from seeing you from this position, but if you had been moving downstream, it would not have helped.

Utilize other cover that is hiding the fish as that also helps conceal you. This can be overhanging vegetation, an undercut bank, a large boulder, or a rock or clay ledge. Turbidity, water depth, and a broken or riffled surface can also help you sneak alongside or above the holding water.

Looking upstream and anticipating the holding water and how you will make your presentation is important. To do this, you must be able to read the water and see well. Polarized sunglasses are an absolute must, and they should be coupled with a hat with a substantial bill or visor to keep the atmospheric glare off the lenses. The glasses should be 100% polarized, and those with amber tints are usually best because they heighten contrast and let through more light while still cutting the surface glare.

Waders rather than hip boots are your best choice, even if you are fishing a mostly shallow stream, because they give you more options when approaching your quarry. They allow you to stay in the stream in deeper water, keeping you out of sight. They also allow you to kneel in shallow water if necessary to stay out of sight and get into the best position to cast. As mentioned earlier, a wading staff will help you move well through deeper, rockier sections. Paying attention to where you are wading can also help you approach the fish. Try to avoid areas with loose rocks and gravel that will shift and make noise when you walk on them. Often the best and easier path is the deeper route because there will be less current and, of course, you are less visible to the fish when you are waist-deep in the water.

A stealthy upstream approach is a good one for all river species in addition to steelhead. It is certainly a great tactic for fishing low and clear rivers for especially wary species like brown trout and large smallmouth bass. And, for sure, it is the key way to be successful when fishing creeks and small streams. Making sure the fish don’t know you are in the area will always be an important part of enticing a strike. Be sneaky and improve your odds for hooking lots of big fish.

As a final note, many of the small streams that receive good steelhead runs are also designated trout streams. The bad news is that they can’t be fished until trout season opens. However, the good news is that we have the earliest possible opener, April 24, in 2021. So if we have a normal to late spring, look for good steelhead numbers to be still present in many of these streams.

In Michigan, we are fortunate that almost all of our small steelhead rivers are considered public water, and we can wade or float them when gaining access from public access sites or public road right of ways. This is not the case in many states and provinces where steelhead swim upstream.

Often land is posted at bridges because the landowner doesn’t want strangers on his property but could care less about the stream and the fish. By asking permission and getting to know the landowner, you can often gain access to fish relatively lightly fished water. Ask if the landowner would prefer if you released all of your fish and then abide by his/her decision. Conversely, if keeping fish is okay, offer to bring the landowner a legally caught steelhead if a fresh fish dinner is desired. And, go a step further and ask how they want the fish, whole, filleted, or dressed.

Always show respect for the adjoining land and leave no trace that you have fished, leaving no litter and getting in and out of the stream where you won’t harm the bank. Show you care by hauling out litter that someone else has left behind. If the landowner still doesn’t let you fish, politely thank him for considering your request and try another location. Perhaps you can then return the following season and try again.

Given our litigious society, probably many landowners feel the need to protect themselves from liability claims from anglers that injure themselves on their property. No doubt that is often the reason for the multitudes of no trespassing signs. A possible plan could be to try writing a waiver of liability form, perhaps with the help of an attorney friend, and then bring a copy with you when you ask permission. If the liability concern happens to come up, you can offer to sign the waiver in the landowner’s presence and leave it with them.

Finally, maps help get the lay of the land for the small rivers and streams that you are interested in fishing. Many county map books color code federal and state lands in addition to showing public access sites. On public lands and those in conservation easement programs, you can use the maps to pinpoint travel routes to the river and, with a relatively small amount of hiking, find yourself some fine fishing without competition. Somewhat larger small streams might also be navigable with personal watercraft, and the maps will show you where you can launch and take out as well as give you a feeling of the sinuosity of the stream. This translates into the likely distance in stream miles and how long the float might take. Of course, the number of fish present and the amount of quality holding water will also factor into the time equation.