A Power Twist for FINESSE 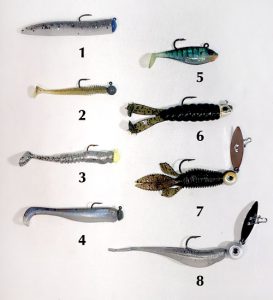 Perhaps the most frustrating period for Michigan bass anglers occurs in April and May as our waters warm, and bass come up shallow from their winter haunts. You can see schools of them, largemouth, in particular, acting like their brains are still frozen. Inches below the surface in manmade channels and shoreline shallows, they aimlessly cruise.

They’re almost like zombie fish, listlessly floating, but unlike the human undead of movies and TV that want to devour everything with a heartbeat, these fish don’t want to eat anything.

Eventually, these fish, sometimes referred to as “pre-pre-spawners,” do put on the feedbag—and you can still occasionally get a reaction strike when they’re just cruising. Small spinnerbaits and jerkbaits can work, and so can swimjigs. You want to throw something that surprises them as it passes through their strike zone, but these fish are so shallow that it’s easy to spook them with traditional reaction baits that power anglers throw.

Here’s a suggestion: Try surprising them with something that looks like a minnow or small panfish. Something on the finesse side, but not presented in a traditional finesse way.

Now, backing up a bit, one popular definition of finesse is making a small lure act like a baitfish or crayfish that’s just going about its business. Instead of making it look wounded and stand out in its environment as so many bass presentations do, you want your lure to act like prey that’s doing its best to survive without drawing attention to itself. If you think about it, if bass only ate forage that had been wounded, they wouldn’t eat much or often.

With “power finesse,” you’re still using something smallish that mimics a bass’s favorite prey, but you’re presenting it in such a way that you might get your target to react and bite before it has a chance to perceive that your lure isn’t real.

One overcast day in early May a few years ago, during a kayak tournament, the shallows of ultra-clear Gull Lake were crawling with cruisers. Bumping a Ned rig (a 2.75-inch plastic TRD on a 1/16-ounce, open hook jighead) along the bottom made no impression on these fish. However, a few did react if I swam the lure with a constant jigging motion right in front of them. I could see them turn and grab the lure, but unfortunately, I was so geeked to set the hook; I did it three straight times as soon as I saw their mouths open and gills flare and missed every fish. The lesson was to wait until I felt the tug of the bass turning and swimming with the lure, its mouth closed.

The point is, bringing a small lure quickly into a bass’s strike zone is a good way to get that fish to react and bite, whether you can see the fish or not. In my book, the most effective small lures are those that look like minnows and small baitfish. To work these lures quickly, you sometimes need a little more weight. To get an impulse strike from shallow cruisers, it seems like the more your lure looks like natural prey, the better.

Let’s look at the lures in the picture.

1) This is a basic Ned rig made of a 1/16-ounce head from Jade’s Jigs and half of a Bass Pro Shops Stik Worm. For swimming it and getting reaction bites, best use a two-tone plastic that mimics a minnow.

2) The 2-inch Keitech is on a 3/32-ounce Keitech ball head jig. This little bait can be reeled quickly into a fish’s strike zone.

3) The new Donkey Tail on a chartreuse Mule Jigs head. Although it’s not a natural color, many times, bright, subtle lures do get bass to react.

5) The 2-inch, 1/8-ounce Storm WildEye Swim Shad has a realistic finish and can be reeled quickly to garner an impulse strike.

6) Normally rigged flat to mimic a crayfish, the new TRD GOAT from Z-Man can be rigged so the high-action tails swim naturally, like a fish. This little lure in dark colors works well in stained water. It’s rigged on a 1/8-ounce Finesse EyeZ jighead from the same company.

7/8) These are Z-Man WillowVibes; basically chatterbaits with the volume turned down. Number 7 is a 1/4-ounce size with a TRD BugZ rigged sideways to create a panfish profile, while 8 is a 3/8-ounce version with a 3.75-inch StreakZ plastic. We started throwing these in the cold waters of March, and, well, they caught so many largemouths that they probably will be tied on all year.

So there you have it, bass fans. A power finesse presentation idea to get reaction bites from finicky fish. Give it a try in the early season. The results will likely keep small lures you can work fast in your bag of tricks all season.