Brown trout are very popular with anglers who don’t have access to large Great Lakes boats because they can be readily caught by trolling in near shore waters in the early open water season and often from piers, the shore, and in Great Lakes tributary rivers and below lower dams in those rivers. They are also a valued sportfish throughout the fishing season in the Great Lakes.

After the Wisconsin and Michigan Great Lakes brown trout fishery decline in 2000, several groups started trying to resolve this issue and improve brown trout stocking survival with good results. Great Lakes run brown trout are a highly prized fishery in Green Bay. The Marinette & Menominee Great Lakes Sportfishermen have held a brown trout derby for many years around the beginning of August.

This highly valued fishery for Great Lakes brown trout is almost completely supported by maintenance stocking by the DNRs. The increase in the efficient fish-eating cormorant populations has increased, and the birds regularly showed up at DNR stocking sites. It became a major concern for the stocking survival. In addition, spring stocking often corresponded with numerous walleye, pike, muskie, and other predators concentrated in close proximity to the only suitable shoreline stocking locations. 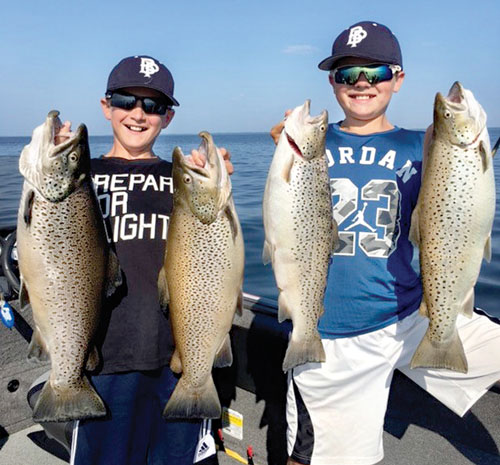 Lucas Bradley & Blake Buchinger with a nice catch of browns off Menominee.

A few measures were taken, such as having the hatchery truck drivers drive large flocks of cormorants away from stocking sites with shell crackers (shotgun blanks) when they were planted. The shell crackers scare method by hatchery truck drivers, or sports club volunteers was ineffective since the brown trout fingerlings typically stayed in the near shore predation zone for a longer time. That method would also not affect fish predators like northern pike, muskie, and walleye.

Wisconsin DNR made some major changes in their stocking programs to boost brown trout survival at stocking and yield to the anglers. In Lake Superior, the DNR started offshore stocking in 2009 by the DNR research vessel Hack Noyes. In Green Bay and off Marinette, offshore stocking began in 2011 by the research vessel Coregonus. Brad Ray of the Wisconsin DNR in Bayfield, Wisconsin, said in 2011, they switched to using the Seeforellen strain of brown trout. Ray went on to say two years after the stocking changes in 2011, their creel census revealed that the Wisconsin waters’ catch went up. Ray said in 2011, the average number of brown trout harvested in Wisconsin waters of Lake Superior was 2,800 fish a year, and two years after stocking exclusively Seeforellen strain, the harvest has averaged 3,621 (2015-2017).

He stated, “This increase in harvest can be attributed to stocking strategy.”

This strain originated from alpine lakes in Germany. Seeforellen generally lives longer and grows faster than other strains, thus adding to the fishery’s trophy element.

The Marinette & Menominee (M and M) Great Lakes Sportfishermen Club requested the MDNR start stocking their brown trout offshore to improve their survival rate. However, MDNR decided to hold off on those changes until they studied them more. The club asked if they could assist the MDNR and move the brown trout to be stocked offshore, and the DNR agreed. In 2018 the M and M started holding the brown trout in a net pen and moving them offshore to be released. They followed this up with a larger plant in 2019 and plan to continue in the future.

Tammie Paoli, Fisheries Biologist for the Wisconsin DNR in Peshtigo, said, “Since offshore stocking began in 2010, harvest rate has generally improved compared to the previous eight years. Two exceptions are 2013 and 2014, which were late ice-out springs that prevented early-season nearshore trolling for brown trout.”

Both Wisconsin DNR survey efforts and numerous fishing reports indicate the fall brown trout fishery in the lower Menominee River has also significantly improved. Keith Woloway, President of the M and M club, said, “The Menominee River has been very good for browns this spring. Shore and boat fishermen are doing very well.”

As a long-time Keweenaw Bay trout angler, my fishing buddies and I share information and can all attest to the fact that the brown trout fishery has greatly improved in recent years in the bay. Those fish’s primary source is the Wisconsin brown trout offshore stocking program west of there at Saxon Harbor and Chequamegon Bay.

Although the offshore stocking method has not been completely evaluated in Green Bay, it appears to be contributing to improved catches by both Wisconsin and Michigan anglers. The strain evaluations in Michigan still need to be completed. I asked Jay Wesley, acting MDNR Fisheries Chief, if they were ready to commit to offshore brown trout stocking. He indicated that they needed to evaluate that more before making any commitment.