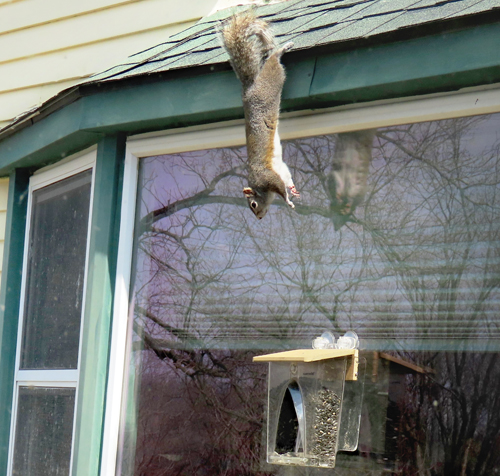 No bird feeder is really squirrel-proof when they have superpowers!

An unexpected encounter back in April while inspecting my screech owl nesting box served as a reminder that assumptions of any kind may be wrong, especially when it comes to less than attentive observations of nature’s way. I had assumed the nest box to be empty since I had not noticed any activity, nor had I heard any of the whinny-like, territorial trills of this rather common cavity-nesting species of owl. And I had paid little attention to the gray squirrel that was sometimes sprawled out on the limb of an adjacent tree next to my porch just a few dozen feet from the nesting box. I should have.

The moment I opened the nesting box, the gray squirrel exploded into vocalizations from the adjacent tree where she had been resting on a branch in the late afternoon spring sunshine. She “hauled-tail” down that tree, raced towards the intruder (me) and all but flew up the backside of the nest box tree as I hauled-butt down the ladder side. But before my rapid descent began, I had a glimpse of the reason for her behavior; baby squirrels squirmed about in the nest box.

I offered the distraught mom verbal apologies as she continued to chatter loudly and chastise me with her rapid back and forth tail-flicking from the top of the box before she re-entered. I took the tail-flicking as a message to stay away, my first attempt at deciphering body language communications of squirrels.

The morning after the nest box encounter, she resumed her pattern of feasting on black-oiled sunflower seeds in my double-tube feeder attached to a bay window which I had deemed as squirrel proof. I knew it would be squirrel-proof when I first installed it last winter since it was attached to the middle of a window with suction cups, and squirrels can’t climb on glass. “Squirrel-proof” turned out to be another incorrect assumption of mine, and I had yet to discover one of their superpowers.

That incident and the method she used to reach the feeder reminded me of a chat I had with a squirrel hunting friend a few years ago at the Ortonville State Recreation Area. He explained that sometimes, just as he was about to squeeze the trigger, the squirrel would seem to look his way as if to mockingly say, “Shoot me if you can!” and then leap between branches and scurry headfirst down a tree and seemingly vanish into thin air.

Gray squirrels certainly stir my sense of wonder with their gravity-defying acrobatics that far exceed anything the most skilled human gymnasts or rock climbers could dream of accomplishing. My window feeder visiting squirrel would climb a tree on the side of my house and then leap from a branch onto the porch roof. From there, she scurried to a point above the bay window, and that was followed by another quick leap down to its roof. Her acrobatic skills came into play next, and she would hang upside down from the edge of the bay window roof and swing back and forth until the angle was just right to land on the tube feeder roof and then crawl in and flip around with her tail hanging out. Sometimes she made it in one leap, and sometimes she missed and would then repeat the process to reach the bountiful treat.

Squirrels have sharp, hook-like claws on all four paws designed for clinging to bark, or the screen of a window and a large bushy tail that helps them balance and steer when leaping from branch to branch. And as some squirrel hunters already know, and I now know, they have a secret evasion and escape superpower that enables them to suddenly disappear just as the trigger is about to be squeezed and then reappear in a new location or reach an unreachable bird feeder.

Evolution has been kind to squirrels. They have swiveling ankle joints that allow them to rotate their hind feet 180 degrees. That amazing adaptation allows them to descend headfirst down a tree or attach themselves to the ledge above my tube feeder with their hind feet pointing backward before making a final leap to their target. It also makes it easier to evade a hunter just as the gun is raised.

I’ve had friends tell me they have seen the same behavior in black squirrels. The fact of the matter is that in much of the Midwest and neighboring Ontario as well, eastern gray squirrels commonly occur in two color phases; gray or black, which sometimes leads people to mistakenly believe they are two different species. They are not. Some researchers believe that the black coloration of eastern gray squirrels is a sun-absorbing adaptation in regions where winter means months of snow and periods of extended cold. To add credence to that theory is the fact that black-colored gray squirrels are not found in the southern United States.

The acrobatic skills and superpowers of gray squirrels may have actually helped change the course of history back in 1776. A widely shared story is the relationship of gray squirrels to the defeat of the British redcoats during the Revolutionary War. Legend has it that we owe our liberty to gray squirrels because our rag-tag army of colonists, pioneer farmers, and minutemen developed excellent marksmanship skills by hunting gray squirrels for the dinner table as they leapt about the branches of the hardwood forests of what is now the northeastern United States. That marksmen skill was put to use and led to the defeat of the British and the birth of 13 independent colonies as a new nation.

Jonathan Schechter is a naturalist in Oakland County. Email: oaknature@aol.com