When whitetails fight for space

In order to survive and reproduce, whitetails must have favorable habitat that provides food, shelter, and water in the proper proportions and within accessible distances. However, during the fawning season, “space” also becomes important and, in cases of high deer density, can be a limiting factor.

Many if not most species of birds and mammals defend part of their home range against intrusion from other members of the same species, at least during certain times of the year. This defended area is called a “territory.” 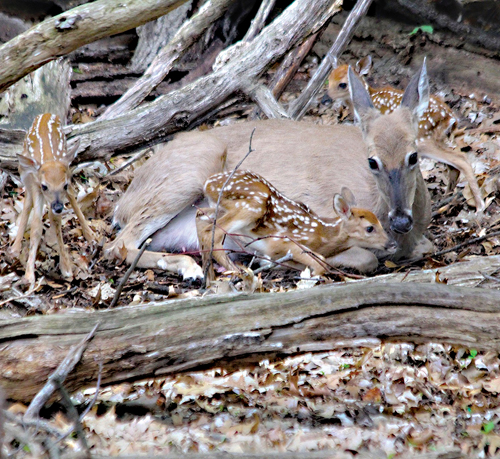 A few days before giving birth, a doe isolates herself by driving away all other deer, including her last year’s fawns. Should her newborn fawns survive, the mother becomes amazingly secretive and boldly aggressive toward neighboring deer. Larry Piotrowski photo

My research, conducted in Upper Michigan’s Cusino enclosure, revealed that whitetail does with newborn fawns defend their fawn-rearing grounds.

The maternally-experienced doe gradually restricts her travel to that of her traditional fawning area, which is generally 10 to 20 acres in size. And a few days before giving birth, she isolates herself by driving away all other deer, including her last year’s fawns. Should her newborn fawns survive, the mother becomes amazingly secretive, boldly aggressive toward neighboring deer (including mature bucks), and adopts a form of territorial defense that will last four to six weeks.

Isolating the young fawn assures that it will imprint on the mother, and not strange deer. The mother normally imprints upon her fawns within a few hours. However, the fawns may require several days before they become fully imprinted upon their mother. In addition, social isolation serves to reduce deer activity and associated odors in the vicinity of vulnerable fawns, thereby minimizing fawn detection by predators.

Young does fawning for their first time behave similarly. Each one sets up and defends a fawning territory, border to border with that of her mother.

Related does know one another intimately and live within a firmly established dominance hierarchy on range they’ve probably occupied for a number of years. Each mature doe knows its place, generally uses the same fawn-rearing area year after year, and can probably identify territorial boundaries of relatives based upon odors of their urine, feces, or even certain glandular secretions. This discourages neighboring does from trespassing upon one another’s territory and usually eliminates the need for serious conflict.

This intricate system of territory formation helps the matriarch (oldest) doe preserve her traditional fawning area, benefits the young inexperienced doe and her offspring in various ways, and also provides for an orderly expansion of a clan’s range during “good times.” It also promotes a form of population self-regulation.

In my studies, I observed a strong relationship between fawn-rearing success among young (two- and three-year) does and herd density. Once deer density surpassed 100 deer per square mile, these young does, fawning for their first and second time, lost 63 percent and 24 percent of their fawns, respectively. At the same time, older does only lost six percent of their offspring.

Indirect evidence suggested that most fawns died shortly after birth and that losses were related to territorial behavior, crowding, and limited fawn-rearing space. Because dominance among female whitetails is closely related to their age, wherein older does attain the highest rank, older mothers usually secure the best fawning habitat and are invariably more successful in raising fawns when space is limited.

Clearly, no two does, living in a natural forested environment, can simultaneously occupy the same acreage to raise fawns. Without fail, as female deer density escalates, newborn fawn survival rates decline. Thus, a lack of suitable fawn-rearing space can limit deer population size, even when food, shelter, and water are not otherwise limited.