The comeback of peregrine falcons…

Michigan’s speediest and stealthiest raptor species is positively the peregrine falcon. Here are some fascinating facts about those fast and fierce feathered friends.

The scientific name of the peregrine falcon is Falco peregrinus. The species name derives from the Latin adjective, “peregrinus” meaning, “coming from foreign parts” or, more commonly, “a wanderer.” The name is apropos because these wandering avians can migrate very long distances in search of food, mates, and nesting sites. In parts of North America, they possess the common name of duck hawk. There are 35 members of the genus Falco worldwide. 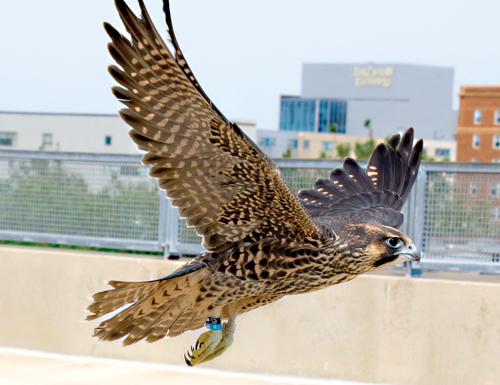 A juvenile peregrine falcon takes flight near her fifth-story balcony nest on the Wayne State University campus. She had fallen out of the nest weeks before and was in the care of a raptor rehabilitator until she was able to fly and be reunited with her family. Patrick Bevier photo

As mentioned, the term “wanderer” perfectly describes the habits of this species as peregrines are found on every continent except Antarctica. Amazingly, there is a record of an individual migrating from Alaska to Peru, a distance of 6,630 miles!

Tale of the Tape

Peregrines are one of the largest members of the family Falconidae but small compared to many Michigan raptors. As adults, they feature plumage in the form of a blue-grey back, barred white underparts, and a black head, and yellow eyes and beak. The wingspan can reach almost four feet, and the larger females can weigh up to 3.5 pounds.

Peregrines have been clocked at a mind-blowing 240 miles per hour on a dive, making them far and away the fastest animal on the blue planet. You can imagine what little chance relatively slower prey animals like rodents, birds and squirrels have when a peregrine sets its talons on them. These speeds are made possible because of the falcon’s aerodynamic shape and pointed wings. They also possess cardiovascular and respiratory systems that allow them to beat their wings up to four times per second without fatiguing. The descent of a bird, especially if in pursuit of prey, is called a “stoop.”

The Eyes Have It

One of the most amazing attributes of these birds is their extraordinary eyes. Indeed, peregrine eyesight is eight times more powerful than a human as they can spot a small prey item from almost two miles away. They possess an extra clear eyelid for protection while flying and a ridge over the eye, providing shade from sunlight. Adding to the perfect design are specialized bones in the falcon’s skull that help hold its eye in place during on-a-dime darting maneuvers.

In addition to razor-sharp talons falcons have a hooked cleaver at the end of their beaks to quickly sever the necks of prey.

Urban Southeast Michigan sports some very devoted individuals and groups committed to protecting these special birds. One such group is what I’ll call, The Friends of Wayne State Falcons. This cadre of WSU students, employees, and friends has been watching for peregrines for over a decade.

Case in point, I was invited to the release of an eight-week-old chick that had fallen out of the nest weeks before. Doctoral student Michelle Serreyn found the bird on the ground after a tumble from its fifth-story balcony nest on the Old Main Building in the heart of the campus. The chick, named Aurora, was unhurt but weeks away from being able to fly. The team enlisted the help of master and licensed raptor rehabber Dave Hogan. After several weeks of feeding and flying exercises, she was released from a parking garage roof adjacent to her nest. In what was one of the most moving things I had ever witnessed, the chick took flight right out of its carrier but landed on the ledge and posed for our admiring group for about 15 minutes before her mom swooped down. Aurora took flight to be reunited with her family.

At last check, Aurora and her two siblings were doing great! There is a FalconCam installed on their nest, including some archival footage at www.go.wayne.edu/falcons. Additional information on these urban birds can be accessed on the Peregrine Falcons Southeast Michigan Facebook page.

In the Great Lakes State and throughout much of the U.S., peregrine falcon numbers plummeted in the 1950s. This was largely due to the widespread use of the devastating pesticides DDT and PCBs. The chemicals invaded food webs and caused deadly neurological disorders in the birds and eggs to be very brittle and break during incubation. The fantastic news is that Michigan peregrine numbers have increased significantly to the point that they are now considered a stable species. Two events – the banning of DDT in 1972 and the passage of Endangered Species legislation in 1974 – played key roles in this resurgence. Peregrines were removed from the federal endangered species list in 1999.

Speaking of insidious chemicals entering ecological systems, I urge everyone to find alternative rodent control methods rather than rat poisons. Falcons, as well as other birds of prey like owls, eagles, and hawks, may consume the mice and, in turn, die because of the poison they’ve ingested. To think that a majestic bird that travels so far, and could produce many future generations, would perish from this human practice is devastating.

Peregrines mate for life but, besides caring for their young during their summer development period, spend the rest of the year in different and diverse locations. Clutch sizes are usually three to five chicks (also called eyas), and the incubation time of eggs is about 30 days. The little ones are born helpless, covered in whitish down, eyes closed, and only weigh 1.5 ounces! Eyas fledge at about 40 days. Michigan falcons usually begin their mating rituals in April. In other areas of the country, they may build a cliff nest 1,400 feet high or higher as some nest on the rim of the Grand Canyon! Because of the adaptability of these birds, the number of active nests in urban settings has skyrocketed. Notable falcon nest sites include the Detroit Zoo water tower, the Monroe power plant, the Fisher Building, and the light towers of Comerica Park.

While many raptors, eagles, red-tailed hawks, and osprey make their nests out of sticks, peregrines prefer to fashion their brooding areas out of gravel. The nest that was on the Wayne State campus, for example, featured small rocks gathered from the urban landscapes and roadsides below.

Peregrines live to be 12 to 15 years old. However, the first year of life is quite perilous as the mortality rate is 60% in yearling birds. Causes are disease, predation, and collisions, but can also be from battles with adult birds from adjacent territories.

Peregrines possess the most diverse diet of all raptorial birds, with a remarkable 450 different prey species documented in their North American cuisine! They have adapted well to taking city birds, especially pigeons that may comprise up to 90% of their diet and mice, voles, rabbits, squirrels, songbirds, and even large insects when available. If they can spot it and catch it, they’ll eat it. Because of this wide array of foodstuffs, Falco peregrinus are quite adaptable in habitat preference, as long as they have the aforementioned lofty nesting sites.

Falconry, the art of training falcons to hunt small animals and birds, dates back 3,500 years to ancient Mesopotamia and Mongolia. Not for men only, historical records show several notable women enjoying the hobby, including Queen Elizabeth I, Catherine the Great of Russia, and Mary, Queen of Scots. Still going strong, The International Association of Falconers today boasts a membership of more than 60,000.

A very popular Marvel comic superhero is Falcon (alter ego Sam Wilson). He was a close pal of Captain America and co-starred in mainstream movies, including several Captain America, and Avengers, blockbusters. Most significantly, and first appearing in 1969, the Falcon was the first African-American superhero in mainstream comics.

Falcons have flown into the world of rock and roll with most notable entrees including group The Falcons song, “You’re So Fine,” Billy Falcon’s “Power Windows,” and Falco’s dreadful disco hit, “Rock Me Amadeus.”

In a 1965 mascot naming contest, the new Atlanta, Georgia professional football team reached out to citizens. A local high school teacher named Julia Elliott offered the name “Falcons” and won the contest. She wrote, “The falcon is proud and dignified, with great courage and fight. It never drops its prey. It is deadly and has a great sporting tradition.”

Those are some terrific tidbits about those amazingly adaptable and adept animals, the peregrine falcons. With any luck – but you better look quick – you’ll encounter one near the woods, waters, or water towers of the Wolverine State!