One of the most maligned and misunderstood mammals in Michigan are possums. Yet, in reality, they are very beneficial animals. Here are some terrific tidbits about these harmless, somewhat hairless, and hardy helpers:

You say Possum; I say Opossum

In true linguistically illogical form, both possum and opossum correctly refer to the Virginia opossum found in Michigan and large swaths of North America. In common use, possum is the usual term; in technical or scientific contexts, opossum is preferred. Opossum can be pronounced with its first syllable either voiced or silent. To confuse the situation further, there is a critter who is properly called a possum. It’s a small arboreal marsupial that inhabits Australia and New Guinea. For consistency, in this piece, I’ll refer to these marvelous marsupials as ‘possums.’ 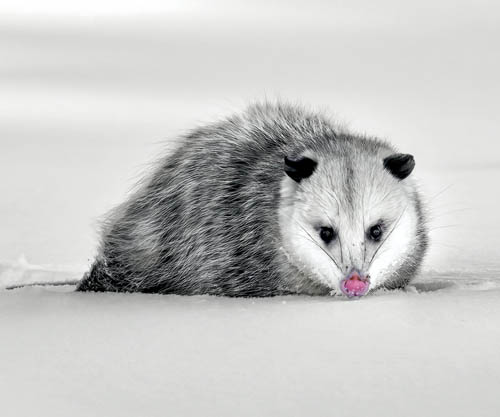 Possums or opossums have more teeth than any other North American mammal. They possess a full jaw supporting 50 teeth!

The scientific name of the possum is Didelphis virginiana. The genus Didelphis is derived from Ancient Greek and translates to di, meaning “two,” and delphus, meaning “womb.” (Their unusual reproductive anatomy will be explained more later.) The species name harkens from the area in which it was first scientifically identified in 1792. Accordingly, the animals are often called Virginia possums, and in some regions, they’re coined North American possums. The common name, opossum, comes from the native Algonquin tribe’s vernacular and loosely translates to “small, white animal.”

Tail of the tape

Possums are cat-sized mammals with grey fur and white face. They average 21-36 inches long and tip the scales at 8-15 pounds. Possums also sport a long, pointy snout, round black eyes, a plump pink nose, hairless ears, and a substantial leathery tail spanning over 1/3 of its total body length.

Possums have an extremely ephemeral life expectancy of only 1-2 years in the wild. Specimens have lived up to four years in captivity.

Possums have more teeth than any other North American mammal. They possess a full jaw supporting 50 teeth! Because of their large, numerous canines, you get the impression that they’re the only tooth type they have. In reality, they feature several incisors and molars.

Possums originated in tropical regions and are the only marsupials found north of Mexico. Their flexible diets, urban adaptability, and reproductive habits make them successful colonizers and survivors in diverse locations and conditions. They now inhabit all areas of the U.S. except for the Great Plains and Rocky Mountain regions. There are over 100 separate species of possums worldwide.

There are several licensed rehabbers in our state who take possums. Two in S.E. Michigan that I interviewed were Jenni Nuss and Lee Kurche. These ladies are extremely dedicated and knowledgeable about saving possums. Frequently they even need to run a tiny feeding tube into the stomachs of helpless joeys that have been rescued! Nuss, also known as the Possum Queen, has been doing this selfless job for over 35 years, and when asked why she does it, she said, “It’s a passion and a calling. I enjoy caring for and releasing these helpful animals!”

Possums are opportunistic omnivores who eat essentially anything they can find. Therefore, they rid areas of pest species, including destructive rodents, insects, grubs, and ticks. Nuss said, “Without them, our forest floors would be a mess with carcasses, harmful insects, and many more undesirable items.”

Adding to their beneficial credentials, the National Wildlife Federation reports that each possum can consume up to 5,000 potentially harmful ticks per season!

When confronted with a threat, possums exhibit a behavior known as “playing possum” or “playing dead.” If a predator approaches, they will first hiss and bare their teeth. But if they are surprised by a predator, possums may literally faint and become unconscious. It’s a stress-induced response, and the possum has no control over it. They mimic the appearance and smell of a sick or dead animal. The lips are drawn back, teeth are bared, saliva foams around the mouth, and a foul-smelling fluid is secreted from the anal glands. Most of the time, this crazy combination wards off any wannabe diner.

Adding to the litany of unusual characteristics, possums also possess unique genitalia. For example, females have two vaginal canals and two uteri! Accordingly, and like many other marsupials, males possess a bifid (or two-headed) penis.

When baby possums, called joeys, are born, they are the size of a bumblebee! Unlike most mammals, the joeys do not have the ability to suckle; instead, each elongated teat actually extends into the baby’s stomach. The release of milk is like a drawstring. Possum litters may consist of 25 young, but a female has only 13 nipples. If the baby possum doesn’t fasten to a functioning nipple, it dies. The lucky survivors stay attached for 50 to 70 days. After this, they stay in the den or ride around on their mother’s back. After approximately 120 days, the young depart to live the life of a solitary possum, a transition that 60 percent do not survive. Combating this high mortality rate is their ability to have two litters per breeding season.

Although folks sometimes equate their rat-like appearance and formidable canines with other rabies-carrying creatures, possums very rarely carry the debilitating disease. Their comparatively low body temperature does not harbor rabies-causing viruses. Possums are also not ferocious biters, and even the ones we visited who had been rescued did not bite when being picked up.

Other than primates, possums possess the only opposable thumbs in the class Mammalia. They are found on their rear feet only and help possums to be excellent climbers. They are also adept swimmers.

A particularly wacky myth about possums is the once-common view that they give birth out of their nostrils! It’s because the mothers lick their pouch and surrounding areas before giving birth, sometimes making a sneezing sound when they do. Observers apparently then peered into the pouch, saw newly born young possums, and hypothesized they were delivered from the nose!

Possums prefer deciduous woodlands with nearby water sources but are extremely adaptable and succeed in various habitats. They don’t build their own dens, preferring to take shelter in abandoned animal burrows, hollow logs, brush piles and other abodes.

Having originated in tropical climates, possums are better adapted to the warmer climes of the U.S. Many were introduced by humans to northern states and the west coast. Unlike some other mid-sized mammals – think raccoons, red foxes, and coyotes – opossums don’t have furry, protective tails. In fact, their tails, ears, and feet are hairless, making them particularly susceptible to frostbite and even hypothermia. Many Michigan possums bear the physical evidence of surviving harsh winters on their ears, tails, and feet. Their tails often appear stumpy or as if something had bitten them off, but these are signs that they were lost due to frostbite.

Possums are solitary and nocturnal animals. They may den for a few days to escape the cold in winter but need to feed periodically and don’t hibernate. Sometimes they’ll change their nocturnal habits and feed during daylight hours to take advantage of warmer temperatures.

Possums are one of only a handful of animals with prehensile tails. They sometimes employ this appendance to carry items or grip the sides of trees to provide
stability for climbing. Baby possums can even use their tails to hang from branches upside down, although they are only strong enough to hold them for a short while.

Baby possums can live for up to two days after mom has been hit by a car, or babies will sometimes fall off of the mom’s back and, depending on the situation, may be left behind. If you find a possum joey, you can call a local rehabber. You can find a list of licensed rehabilitators at www2.dnr.state.mi/us.

Possums have incredible memories—at least when it comes to food. Researchers found that they are better at remembering which path led to a delicious dish than cats, dogs or pigs. Possums can also recall the smell of toxic substances up to a year after first experiencing them.

Possums are immune to the venom of most snakes, including copperheads, cottonmouths, and rattlesnakes. They produce a protein that binds to the toxins and neutralizes them. Studies are in the works to synthesize the proteins for use as an anti-venom.

While possums may not win a Most Beautiful Animal pageant, they are harmless and highly helpful animals. Those are some of the bizarre yet beneficial beatitudes about those unique and ubiquitous possums. With good fortune, you will encounter one in the woods and waters of the Wolverine State!