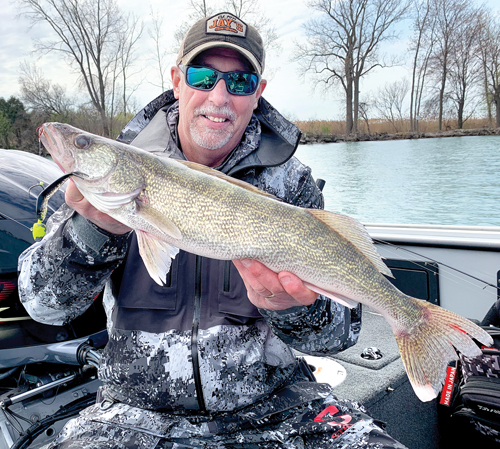 The author knows jigs tipped with soft plastics and stinger hooks are a great way to catch walleye on the Saginaw River, St. Clair River, and as pictured here, on the Detroit River in October through December.

There is good news for fishermen who just can’t get enough walleye fishing action. The month of October offers up great fishing for those who prefer to troll and those who would prefer to have the rod in their hands. Anglers who target walleye in the fall are winners either way, and the fishing just gets better as the leaves drop and the temperatures get colder.

It’s no secret that Saginaw Bay has been offering up outstanding trolling success in recent years. During the fall of the year, the average size of the walleye boated goes up significantly.

Adult-sized walleye (fish upwards of 22 inches) tend to abandon Saginaw Bay during the summer months when the water temperatures spike to near 80 degrees. These fish simply migrate north to Lake Huron, where they spend the summer months in cooler waters more to their liking.

In the fall, when the waters of Saginaw Bay start to cool off, walleye make their way back to the forage-rich waters adjacent to the Saginaw River. Gizzard shad, a walleye favorite when it comes to forage species, are attracted to the Saginaw River in staggering numbers. The warmer and more nutrient-rich waters found in the river guarantees that a steady supply of gizzard shad remains on the walleye menu all fall long.

As shad come and go from the river, walleye make short work of these protein-packed forage fish. The abundance of the gizzard shad sets up a killer crankbait trolling bite that begins in October and lasts until ice puts an end to the fun in December.

Top crankbaits for the fall Saginaw Bay bite include the Berkley Flicker Minnow 9, Berkley Flicker Shad 7 and 9, and the Rapala Deep Husky Jerk 12. All of these baits perform best when teamed up with in-line boards like the famous Off Shore Tackle Side-Planer made in Port Austin, near the shores of Saginaw Bay.

A few of the places that routinely hold fall walleye on Saginaw Bay include the Dumping Grounds near the mouth of the Saginaw River, the area between the Spark Plug marking the shipping channel and the Dredge Island, the end of the shipping channel near Buoy No. 1 and also out in front of Linwood Beach Marina.

Usually, such cloudy water conditions are the kiss of death for jigging presentations, but in the Saginaw River, walleye seem to adapt quickly to the off-color water. Jigs fish best when tipped with four or even five-inch soft plastics, making it easier for walleye to spot them.

Various soft plastics produce consistently on the Saginaw River, including split-tail minnows like the popular Lunker City Fin S Fish. Other good plastics include paddle-tails such as the Berkley Ripple Shad and Z-Man PaddlerZ.

Dark colors consistently produce best on the Saginaw River as these darker plastics have more contrast that makes them stand out against the turbid water. Plastics that include a lot of black, brown, and purple tend to be some of the best producers on the Saginaw River.

Because the water clarity is so limited, plastics that create a distinct thump walleye can feel and hear can really make a difference. Paddle-tails are especially productive in off-color water.

It’s also important to implement natural scent products when jigging in dirty water. Pro Cure’s Super Gel products are made from real baitfish that are dehydrated and ground into powder. This powder is then mixed with a paste-like stabilizing agent that eliminates the need to refrigerate the scent and doubles as a means of keeping the scent where it belongs, on lures and baits.

Most scent products are water-soluble and wash off almost as quickly as they are applied. Super Gel is an oily product that can be applied to jigs, soft plastics, live bait, and just about anything else an angler might put in the water to attract or catch fish. A tiny dab about the size of a pencil eraser will put out a powerful scent stream in the water for about 30 minutes.

The St. Clair River connects Lake Huron to Lake St. Clair and is one of the busiest waterways in the Great Lakes. In the fall, walleyes from both Lake St. Clair and Lake Huron converge on the river to take advantage of the abundant forage in the form of emerald shiners, gizzard shad, smelt, round goby, spot-tail shiners, and young-of-the-year yellow perch.

The same soft plastics (split-tail minnows and paddle-tails) productive on the Saginaw River are also popular on the St. Clair River, but the colors used are considerably different. Natural colors that do a good job of imitating baitfish are generally the top producers on the St. Clair River. A few of the soft plastic colors anglers consistently catch fish using include emerald ice, alewife, perch, black ice, wonder bread, and smelt.

Most anglers add a stinger hook when fishing plastics in the St. Clair River because the current is moving so quickly, and also because of the need to use heavy jigs, short bites are a common problem. Stinger hooks do a great job of putting more fish in the boat.

The headwaters of the river where Lake Huron narrows down and dumps into the St. Clair River is consistently a good spot for fall walleye. Because it’s necessary to use a much heavier jig on the St. Clair River, many anglers prefer to use a medium-heavy or even heavy action baitcasting rod/reel outfit.

The reel should be spooled up with 10-pound test super braid for sensitivity, and it’s important to add about a three or four-foot leader of 15-pound test fluorocarbon line using a double uni knot to connect the braid and fluorocarbon and a common clinch knot or what some people call the Trilene knot to attach the jig. This setup makes it possible to attach the jig using an invisible leader, and just as importantly, the fluorocarbon leader makes it possible to break off snagged jigs without losing the leader. The clinch knot will fail before the double uni knot, making it a simple process to break off the jig and quickly tie on a new one.

The Detroit River connects Lake St. Clair to Lake Erie and is hands down the most popular walleye jigging river in Michigan and perhaps in the Great Lakes region. Ironically, very few anglers fish the Detroit River in the fall of the year.

Anglers typically equip themselves with heavy jigs to vertical jig while the boat is drifting naturally downstream with the current. In most places on the Detroit River, an angler will need jigs in the 1/2, 5/8, and 3/4 ounce sizes.

River walleye in the fall of the year tend to be very aggressive, but there are days when it helps to tip that jig and plastic presentation with a live emerald shiner minnow. Emerald shiners are native in the Saginaw, St. Clair, and Detroit Rivers and widely available from bait dealers. Many anglers consider the emerald shiner the only live minnow worth using for walleye fishing!

Fall walleye fishermen seem to be flocking to Lake Erie’s Ohio waters in recent years. In part, this is because the Fall Brawl tournament that takes place in October, November, and early December does not include the Michigan waters of Erie.

Crankbait trolling dominates the action on Erie in the fall. A few of the top-producing crankbaits include the Rapala Deep Down Husky Jerk No. 12, the Bandit 5/8 Walleye, the Reef Runner 800 series, and the Yo-Zuri Deep Crystal Minnow. Other cranks that deserve an honorable mention include the Storm Deep Jr. ThunderStick, the Berkley Flicker Minnow No. 9, and the Smithwick Deep Suspending Rattlin’ Rogue.

All of these crankbaits have a place in the tackle box of anglers who routinely troll for fall walleye on Lake Erie.

The action starts to heat up in October and gets nothing but better as the weather gets colder in November and December. Both crankbait trolling and river jigging peaks during this time period, giving anglers lots of opportunities to fill the freezer with tasty walleye before the ice puts an end to open water fishing.