Instead of relying heavily upon complex visual displays and voiced sounds for social communication, whitetails make greater use of scent-marking to communicate matters of social significance.

This doesn’t mean whitetails are voiceless. Using sophisticated electronic gear and sonograms to create graphic pictures of the sound waves produced, researchers in Mississippi recorded seven sounds made by deer, while Georgia investigators identified 12 sounds. Despite differences regarding data interpretation, the sounds produced by deer can be grouped into five categories, according to the message being communicated.

Five of the vocalizations made by whitetails involve mothers and their young. When approaching their fawn’s bedding area, does commonly give out a “maternal grunt.” This call, which is of low intensity and audible to humans for only a few yards, generally results in the fawn leaving its bed and running to the doe. Does continue to use the maternal grunt, even when fawns are older, in order to maintain cohesion of the family group.

Young fawns commonly “mew” in response to their mother’s grunt when they are hungry or seek maternal attention. Fawns also give out a louder “bleat,” especially when they are disturbed, which serves as a higher level of care soliciting.

When nursing, the content fawn often produces a brief, low-intensity “nursing whine.” Some researchers speculate that the fawn’s whine helps to identify the fawn, reaffirms the maternal bond, transmits pleasure, and encourages more or continued attention.

Both adult sexes grunt for different reasons. The “tending grunt” is given by the male during courtship of an estrous doe, when he is tending her closely and guarding her from other bucks, or when he is testing prospective mates to determine if they are approaching estrus. The tending grunt is usually of longer duration than other types of grunt calls and differs in tonality from grunts used during agonistic encounters.

Although infrequent, bucks sometimes emit sounds referred to as the “flehmen-sniff” when investigating a doe’s urine. The sound is made when the buck tastes the urine and inhales through pinched nostrils.

Deer emit two alarm calls in response to danger. Compared to most other calls, alarm calls tend to be quite loud. Probably the most common alarm sound made by whitetails is the “snort,” also called the “alert snort.” Deer snort by releasing a brief blast of air through their nostrils. Different types of alarm snorts are produced, depending upon the distance the deer is from the perceived source of danger.

When a deer is surprised at close range, it often gives a very short, almost explosive, blast of air through its nose as it runs off. When danger is detected at a greater distance, and the situation is obviously not life-threatening, deer will more often produce a series of longer snorts while hidden from view. These longer snorts sometimes have more of a whistling quality.

Studies have revealed that members of doe groups are much more likely to alarm snort than members of buck groups. Considering the evolutionary significance of alarm signals, researchers suggest that snorting occurs more frequently in mother-young groups because of benefits to related individuals. They are increasing the likelihood of their own survival at the expense of close competitors for resources and mates.

Except for nursing does, deer generally respond to the bawl of another deer by fleeing. But healthy nursing does are readily attracted to the bawling of their own fawns. 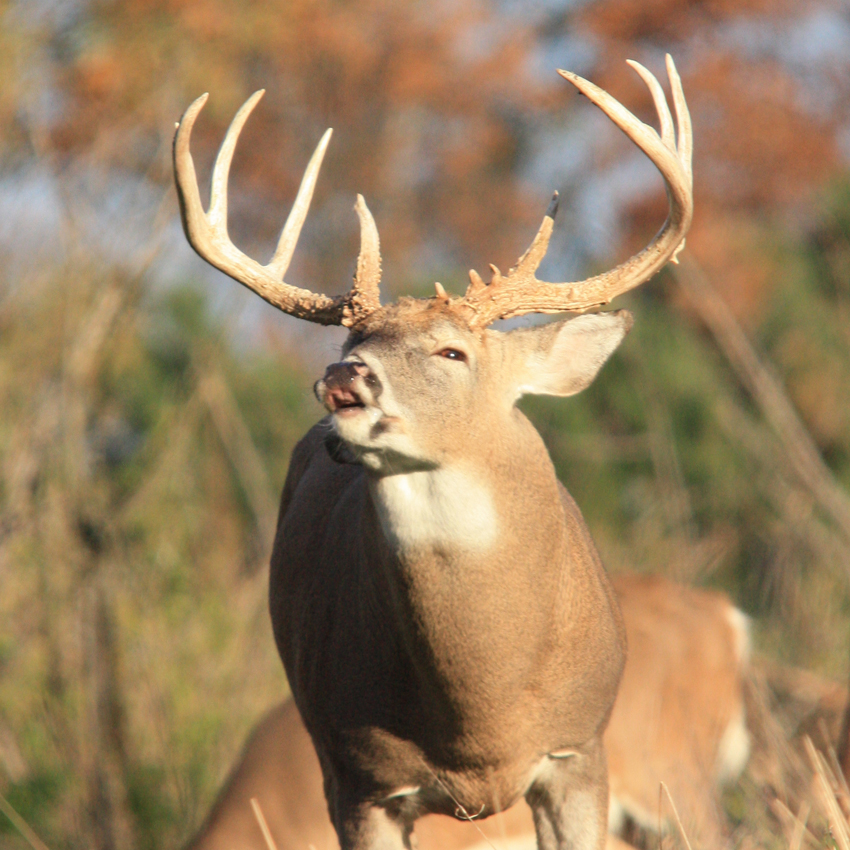 When competing for dominance, whitetails often grunt, snort, and wheeze, which tends to enhance the effectiveness of any given display.

The “low grunt” is considered the lowest intensity of vocal aggressive behavior. Throughout the year, both adult sexes use this low guttural grunt, often in combination with other visual displays of aggression. The “grunt-snort” includes the basic grunt, plus one to four rapid bursts of air through the nostrils. Both does, and bucks use the grunt-snort during more intense encounters.

Researchers in Georgia were the first to document calling among adult female whitetails when separated from their family group. They described this as a voiced grunt of moderate pitch, intensity, and tonality, being longer than the low grunt or maternal grunt but shorter than the tending grunt. Such calling presumably enables members of a group to maintain contact with one another when visual contact is not possible.

Despite their quiet, secretive nature, whitetails use voiced sounds to communicate an array of socially important information. The sounds they make range from being so soft they are barely audible to the human ear to others loud enough to be heard from a distance of several hundred feet.