A Passion for Pheasants

Donation of $25,000 to honor his mother and taking a step toward solving a problem 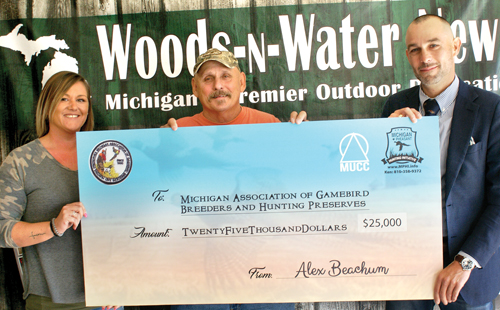 Jackie Hemstrom, Ken Dalton are presented a check for $25,000 by Alex Beachum. The check will assist in the purchase of pheasants for MPHI release program and is in honor of Alex’s mother, Kris.

For Alex Beachum writing a $25,000 check to the Michigan Association of Gamebird Breeders was an opportunity to help solve a problem and honor his mother, Kris. The money will be used to put even more pheasants in the fields this fall so others can enjoy the sport as he has.

The Michigan Pheasant Hunting Initiative (MPHI) organizers have always made it clear releasing pheasants is not about re-population, or should it be confused with the Put-n-Take pheasant programs of years past. The Initiative’s goal and purpose are to reintroduce, recruit and retain hunters.

Alex, 43, a successful Bloomfield Hills real estate broker, is clearly passionate about pheasant hunting. He has vowed to help the organizers of the MPHI, not only with his voice of support, but with his money.

“Thinking back, my most treasured memories were times spent pheasant hunting with Dad (Jimmy Dale) and our English pointer, Mickey. They were intimate father/son experiences,” Alex told me.

But pheasant hunting wasn’t just about Alex and his father, it was very much about his mother.

To this day, each time Alex goes pheasant hunting it rekindles fond memories, time with his father, and his deep appreciation and love for his mother.

“My mother was a beautiful person, a devoted wife and always encouraging us all. She was supportive and put the needs of the family before her own. I couldn’t be prouder of her,” Alex emotionally went on to say.

Alex told me about the backpack his mother made when he was young and got too tired to walk through pheasant cover.

“Dad lifted me into the backpack and we’d continue to hunt. It was a great view to watch the hunt unfold from my perch, as Mickey and my dad did what they loved to do,” he recalls.

Since the decline of the pheasant population in the mid to late ’70s, finding birds to hunt was somewhere between difficult and impossible. Alex’s father was disappointed in Michigan’s pheasant hunting, walking and hunting all day to only flush chickadees.

Again, his mother was there to help. She searched high and low on computer and telephone to find a place in South Dakota to hunt. She spent countless hours searching, she was just that kind of person. Finally, she connected with Jerry Brooks and Jimmy Dale and Alex has been hunting it ever since, remembering how it once was in Michigan.

In May of 2020, Alex’s mother died of lung cancer. With the pandemic raging, they could not hold a traditional funeral, and Alex struggled with such a notion and still struggles with it.

Alex’s donation of $25,000 to the Michigan Association of Gamebird Breeders and Hunting Preserves is in honor of his mother. It’s a donation to preserve and rekindle the once grand tradition of pheasant hunting in Michigan. It’s his love of the sport and love for his mother .

“I feel like I’m doing my part and now I’m asking other pheasant hunters to contribute in anyway they can. I’d like others to get the same experiences I had growing up,” Alex said.

It was also pointed out that 21 other states have a pheasant raise and release program. Hunters are enjoying recreational pheasant hunting on state lands and according to surveys 50 percent who participated in Michigan’s 2019 hunt would not have gone pheasant hunting at all if it was not for the MPHI program.

“Why is it this state has such a sharply different approach to this program when it has been so successful in other states,” asks Alex.

“We have so many success stories in this state, like the wild turkey program, salmon fishing, and now the state talks about spending millions of dollars to reintroduce the grayling. Why not be more supportive of the Initiative?” Alex questions.

“We’re not producing new pheasant hunters either, primarily because we don’t have enough birds to hunt. We need to preserve this grand Michigan tradition. I’m not ready for it to go away,” says Ken Dalton, a tenacious advocate and the founding force behind MPHI.

Ken has assembled a mighty array of passionate pheasant hunters to help him like Rep. Gary Howell, Mike Thorman and Carl Griffin to name just a few.

“If we could bring back small 40 to 80 acre family farms, fence rows, and limit the use of pesticides, I guarantee we’d have a pheasant population explosion in no time here in Michigan,” says Carl Griffin, also a strong supporter, friend and advocate of MPHI.

Carl went on to explain, “Pheasants are one of the ‘gateway’ species, along with cottontails and squirrels. Youth hunters learned about hunting, about guns and ethics from these small game opportunities.”

Lyle Jaworski, president of the Michigan Association of Gamebird Breeders and Hunting Preserves, also feels the MPHI is headed in the right direction. Lyle believes there is nothing more exciting than the sound and sight of a pheasant flushing, watching a dog work and the thrill of the shot at a flying rooster. The more that happens, he thinks, the better off all of us will be because we are out hunting. Remember, some people would like to take hunting opportunities from us.

Lyle believes adding a pheasant hunt to everything else Michigan offers is simply good for the economy. Gas stations, restaurants, hotels, lodges, and most others will benefit from a strong recreational hunting economy.

“Michigan has some of the best fishing in the world. Our upland game, waterfowl, small game, and deer hunting is outstanding, we’re a great tourist destination,” he says.

Lyle feels if we don’t provide an opportunity to recruit new hunters, all of our hunting pursuits are in jeopardy. MPHI is just another cog in all the wonderful opportunities Michigan offers and has the power to help reintroduce outdoorsmen to the sport.

“I think we may be a little too focused on deer hunting, where you sit and wait for game to walk by. Let people experience a pheasant hunt, watch a dog hunt and cover some territory on foot, that’s exciting,” Lyle went on to say.

“The Federal protection of hawks is a big factor in pheasant numbers, they are killing machines. But possums, raccoon and fox are also a major cause as well to bird numbers,” he explained.

“Loss of good habitat, pesticides, poor cover all created problems for the pheasant population since the late ’70s. Although, don’t overlook the effects of Mother Nature, she is brutal and unforgiving on wildlife,” he told me.

“If you recall, the heavy rains and snow of 1977 and 1978 devastated the bird population. And most of the ’80s were harsh winters, birds just couldn’t find food,” Lyle went on to say.

Combine everything the pheasants had to face and you have a recipe for a drastic population reduction. Lyle feels the birds just never recovered from those days.

“We’ve spent a lot of money and time in creating habitat, let’s use it. Get some test areas using the very best spots and plant some birds and see if we can’t get them to propagate in those areas. Do the same in another quality habitat hotspot in the state and with time, maybe we can get the population to a higher level. Even if it is 50 percent of what it was, it would be pretty darn good,” Lyle concludes.